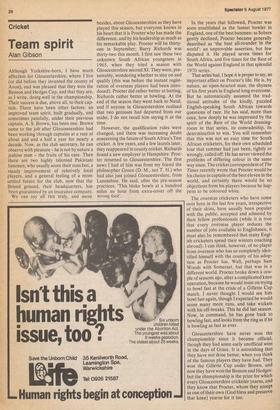 Although Yorkshire-born, I have much affection for Gloucestershire, where I live (or did before they invented the county of Avon), and was pleased that they won the Benson and Hedges Cup, and that they are, as I write, doing well in the championship. Their success is due, above all, to their captain. There have been other factors: an improved team spirit, built gradually, and sometimes painfully, under their previous captain, A. S. Brown, has been one. Brown came to the job after Gloucestershire had been working through captains at a rate of about and and a half a year for nearly a decade. Now, as the club secretary, he can observe with pleasure — he is not by nature a jealous man — the fruits of his care. Then there are two highly talented Pakistani batsmen, who usually score their runs fast, a steady improvement of relatively local players, and a general feeling of a more settled future for the club, now that the Bristol ground, their headquarters, has been guaranteed by an insurance company. We can say all this truly, and more besides, about Gloucestershire as they have played this season, but everyone knows in his heart that it is Procter who has made the difference, and by his leadership as much as his remarkable play. Procter will be thirtyone in September; Barry Richards was thirty-two this month. I first saw these two unknown South African youngsters in 1965, when they tried a season with Gloucestershire second XI. They were, presumably, wondering whether to stay on and qualify (this was before the instant registration of overseas players had been introduced). Procter did rather better at batting, Richards rather better at bowling. At the end of the season they went back to Natal, and if anyone in Gloucestershire realised that two geniuses had departed from our midst, I. do not recall him saying it at the time.

However, the qualification rules were changed, and there was increasing doubt concerning the future of South Africa's Test cricket. A few years, and a few laurels later, they reappeared in county cricket. Richards found a new employer in Hampshire. Procter returned to Gloucestershire. The first news I had of him was from my friend the philosopher Green (D, M., not T. H.) who had also just joined Gloucestershire, from Lancashire. He said, after the pre-season practices, 'This bloke bowls at a hundred miles an hour from extra-cover off the wrong foot'. In the years that followed, Procter was soon established as the fastest bowler in England, one of the best batsmen: as Sobers gently declined, Procter became generally described as 'the best all-rounder in the world': an unprovable assertion, but few disputed it. He played seven times for South Africa, and five times for the Rest of the World against England in that splendid 1970 series.

That series had, I hope it is proper to say, an important effect on Procter's life. He is, by nature, an open-hearted man, the shyness of his first years in England long overcome. But he automatically assumed the traditional attitudes of the kindly, puzzled English-speaking South African towards questions of race. He has said, more than once, how deeply he was impressed by the spirit of the Rest of the World dressingroom in that series, its comradeship, its determination to win. You will remember that this was not an easy time for South African cricketers, for their own scheduled tour that summer had just been, rightly or wrongly, called off. He has never viewed the problems of differing colour in the same way since. The cricket correspondent of The Times recently wrote that Procter would be his choice as captain of the best eleven in the world, and certainly there would be no objections from his players because he happens to be coloured white.

The overseas cricketers who have come over here in the last few years, irrespective of their skins, have usually been popular with the public, accepted and admired by their fellow professionals (while it is true that every overseas player reduces the number of jobs available to Englishmen, it must also be remembered that many English cricketers spend their winters coaching abroad). I can think, however, of no player from overseas who has so completely identified himself with the county of his adoption as Procter has. Well, perhaps Sam Woods with Somerset, but that was in a different world. Procter broke down a couple of seasons ago, after a complicated knee operation, because he would insist on trying to bowl fast at the crisis of a Gillette Cup match. I never thought I would see him bowl fast again, though I expected he would score many more runs, and take wickets with his off-breaks. This he did last season. Now, in command, he has gone back to bowling fast, and looks from the ring as if he is bowling as fast as ever.

Gloucestershire have never won the championship since it became official, though they had some early unofficial wins in the days of Grace. It is astonishing that they have not done better, when you think of the famous players they have had. They won the Gillette Cup under Brown, and now they have won the Benson and Hedges: but the championship is the prize for which every Gloucestershire cricketer yearns, and they know that Procter, whom they accept as one of their own (God bless and preserve that knee) yearns for it too.