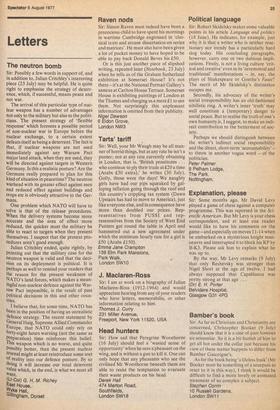 Sir: Robert Skidelsky makes some valuable points in his article Language and politics (18 June). He indicates, for example, just why it is that a writer who is neither reactionary nor trendy has a particularly hard slog today. His concluding paragraphs, however, carry one or two dubious implications. Firstly, is not a living culture 'critical and creative' even in its 'ceremonial and traditional' manifestations — in, say, the plays of Shakespeare or Goethe's Faust? The merit of Mr Skidelsky's distinction escapes me.

Secondly, his advocacy of the writer's social irresponsibility has an old-fashioned nihilistic ring. A writer's inner 'truth' may well constitute a (temporary) danger to social peace. But to realise the truth of one's own humanity is,I suggest, to make an indirect contribution to the betterment of society.

Perhaps we should distinguish between the writer's indirect social responsibility and the direct, short-term 'accountability' — to throw in another vogue word — of the politician.