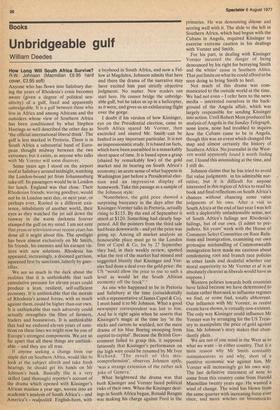 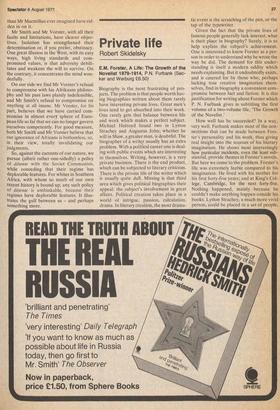 How Long Will South Africa Survive? R.W. Johnson (Macmillan £8.95 hard cover, £3.95 soft) Anyone who has flown into Salisbury during the years of Rhodesia's crisis becomes

aware (given a degree of political sen sitivity) of a gulf, fixed and apparently unbridgeable. It is a gulf between those who live in Africa and among Africans and the outsiders. whose view of Southern Africa has been conditioned by what Stephen Hastings so well described the other day as 'the official international liberal think'. The gulf is less marked in Pretoria. There is in South Africa a substantial band of European thought midway between the two extremes; but it exists, as anyone who talks with Mr Vorster will soon discover.

Some years ago I stood on the airport roof at Salisbury around midnight, watching the London-bound jet from Johannesburg .take off. Its passengers would be in London for lunch. England was that close. Their Rhodesian friends, waving goodbye, would not be in London next day, or next year, or perhaps ever, Rooted in a different existence, inhabitants of another world, their, eyes as they watched the jet sail down the runway in the warm darkness forever stamped the gulf on my mind. I am not sure that press or television over recent years has done all it might about this. The spotlight has been almost exclusively on Mr Smith, his friends, his enemies and his earnest visitors with new solutions. Rhodesia has appeared, increasingly, a doomed garrison, squeezed first by sanctions, latterly by guerrillas.

If anyone seeking a change from our staple diet on Southern Africa, would like to look at the subject afresh and take fresh bearings, he should get his hands on Mr Johnson's book. Basically this is a very skilled (and thorough) reporter's account of the drama which opened with Kissinger's African mission a year ago, woven into an academic's analysis of South Africa's — and America's — realpolitik. English-born, with

a boyhood in South Africa, and now a Fellow at Magdalen, Johnson admits that here and there the drama of the narrative may have excited him past strictly objective judgments. No matter. New readers can start here. He cannot bridge the unbridgeable gulf, but he takes us up in a helicopter, as it were, and gives us an exhilarating flight over the gorge.

I doubt if his version of how Kissinger, eye on the Presidential election, came to South Africa snared Mr Vorster, then encircled and snared Mr. Smith ',can be faulted in any important particular. It is not an impressionistic study. It is based on facts, which have been assembled in a remarkably short space of time. It is based upon a grasp (shared by remarkably few) of the gold market and its bearing on South Africa's economy; an acute sense of what happens in Washington just before a Presidential election and an impressive display of homework. Take this passage as a sample of the Johnson style:

'Nonetheless, the gold price showed a surprising buoyancy in the days after the Kissinger-Vorster talks in Pretoria, actually rising to $115. By the end of September it stood at $120. Something had clearly happened. All the pointers from the third sale had been downwards—and yet the price was going up. Among all market analysts an honourable place must go to the London firm of Capel & Co, for by 27 September they had, in their weekly review, spotted what the rest of the market had missed and suggested bluntly that Kissinger and Vorster had done a deal over the gold price: the US "would allow the price to rise to such a level as would let the South African economy off the hook": As one who happened to be in Pretoria and Salisbury at the time (coincidentally with a representative of James Capel & Co), 1 must hand it to Mr Johnson. What a good newspaper correspondent was lost to him. And he is right again when he asserts that Kissinger's magic at the time lay 'in the sticks and carrots he wielded, not the mere drama of his blue Boeing swooping from capital to capital'. Because the British Government failed to grasp this, it supposed fatuously that Kissinger's performance on the high wire could be resumed by Mr Ivor Richard. 'The result of this miscomprehension', observes Johnson aptly, 'was a strange extension of the rather sick joke of Geneva.'

What heightened the drama was that both Kissinger and Vorster faced political risks of their own, When the Kissinger dealings in South Africa began, Ronald Reagan was making his charge against Ford in the

primaries. He was denouncing detente and scoring well with it. The slide to the left in

Southern Africa, which had begun with the Cubans in Angola, required Kissinger to exercise extreme caution in his dealings with Vorster and Smith.

For his part, in dealing with Kissinger Vorster incurred the danger of being denounced by his right for betraying Smith and the whites' cause in Southern Africa. That put limits on what he could afford to be seen doing to bring Smith to heel.

Not much of this drama was communicated to the outside world at the time.

We had not even — I refer here to the news media — interested ourselves in the background of the Angola affair, which was largely responsible for sending Kissinger

into action. Until Robert Moss produced his analysis of Angola in the Sunday Telegraph,

none knew, none had troubled to inquire

how the Cubans came to be in Angola, though this was an event which changed the

map and almost certainly the history of Southern Africa. No journalist in the Western world apparently found it worth finding out. I found this astonishing at the time, and I still do.

Johnson claims that he has tried to avoid flat value judgments in his admirable nar rative; but it is difficult for anyone interested in this region of Africa to read his book and final reflections on South Africa's chances without chancing some value judgments of his own. 'After a visit to South Africa at the end of last year I was left with a deplorably unfashionable sense, not 'of South Africa's failings nor Rhodesia's failings, but of our own. (I admit to pre judices. Six years' work with the House of Commons Select Committee on Race Relations and Immigration, examining our own grotesque mishandling of Commonwealth immigration have made me cautious about condemning root and branch race policies

in other lands and doubtful whether our moral superiority to Mr Vorster et al is as absolutely clearcut as liberals would have us suppose.)

Western policies towards both countries have failed because we have determined to isolate rather than seek to influence regimes we find, or some find, totally abhorrent. Our influence with Mr Vorster, as recent events have shown, is virtually non-existent.

The only way Kissinger could influence Mr Vorster was by arranging for the US Treas ury to manipulate the price of gold against him. Mr Johnson's story makes that abundantly plain.

We are not of one mind in the West as to what we want — in either country. That is a main reason why Mr Smith constantly outmanoeuvres us and why, short of a punitive economic war against him, Mr Vorster will increasingly go his own way.

The last definitive statement of note to come from this country came from Harold Macmillan twenty years ago. He wanted a wind of change. The wind has blown from the same quarter with increasing force ever since, and more witches on broomsticks than Mr Macmillan ever imagined have ridden in on it.

Mr Smith and Mr Vorster, with all their faults and limitations, have clearer objectives. Isolation has strengthened their determination or, if you prefer, obstinacy. One great illusion in the West, with its easy ways, high living standards and compromised values, is that adversity debilitates and weakens the will to survive. On the contrary, it concentrates the mind wonderfully.

On our side we find Mr Vorster's refusal to compromise with his Afrikaans philosophy and his pass laws plainly indefensible, and Mr Smith's refusal to compromise on anything at all insane. Mr Vorster, for his part, believes that we have carried compromise in almost every sphere of European life so fai that we can no longer govern ourselves competently. For good measure, both Mr Smith and Mr Vorster believe that our ignorance of Africans is bottomless, so, in their view, totally invalidating our

judgments, • So, against the currents of our nature, we pursue (albeit rather one-sidedly) a policy of détente with the Soviet Communists, while conceding that their regime has deplorable features. For whites in Southern Africa, with whom so much of our own recent history is bound up, any such policy of detente is unthinkable, because their regimes have deplorable features. It illustrates the gulf between us — and perhaps something more.