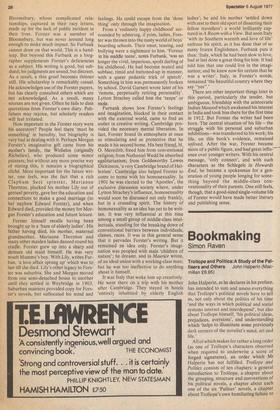 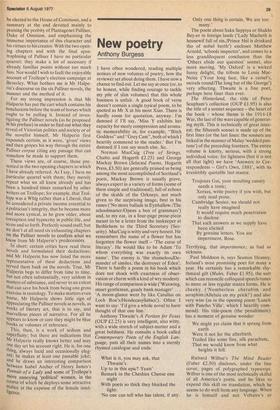 Trollope and Politics:A Study of the Pallisers and Others John Halperin (Macmillan £8.95) John Halperin, as he declares in his preface, has intended to sum and assess everything that Trollope's political novels have to tell us, not only about the politics of his time 'and the ways in which political and social systems interact and interdepend', but also about Trollope himself, 'his political ideas, prejudices, aversions', and understanding which 'helps to illuminate some previously dark corners of the novelist's mind, art and life.'

be elected to the House of Commons, and a summary at the end devoted mainly to praising the probity of Plantagenet Palliser, Duke of Omnium, and emphasising the immense importance of this character and his virtues to his creator. With the two open ing chapters and with the final apostrophising of Palliser I have no particular quarrel: they make a lot of necessary if already familiar points without too much fuss. Nor would I wish to fault the enjoyable account of Trollope's election campaign at Beverley. What bothers me is Mr Halperin's discourse on the six Palliser novels, the manner and the method of it.

For my strong impression is that Mr Halperin has put the cart which contains his conclusions before the team of horses which ought to be pulling it. Instead of investigating the Palliser novels (as he proposed in his preface) in order to find out what they reveal of Victorian politics and society or of

the novelist himself, Mr Halperin first expounds certain, as it were, 'given' views and then gropes his way through the entire Palliser corpus citing any passage that can somehow be made to support them.

These views are, of course, those presented in the two Opening chapters to which I have already referred. As I say, I have no Particular quarrel with them; they merely repeat what we all knew already and has been a hundred times remarked by other writers on Trollope; for example, that Trollope was a Whig rather than a Liberal, that he considered a private income essential to a politician's integrity, that he became more and more cynical, as he grew older, about corruption and hypocrisy in public life, and 500n and so forth. Perfectly sound stuff; but we don't at all need six exhausting chapters on the Palliser novels to confirm what we know from Mr Halperin's predecessors.

In short: certain critics have read these novels and formulated their deductions; and Mr Halperin has now listed the more representative of these deductions and served them back on the novels. True, Mr Halperin begs to differ from time to time, but not often substantially, very seldom in matters of substance, and never to an extent that can save his book from being one gross exercise in tautology. To make matters even worse, Mr Halperin shows little sign of appreciating the Palliser novels as novels, as Works of literary art, that is to say, and Marvellous pieces of narrative. For all he appears to know or care they might be blue books or volumes of reference.

This, then, is a work of tedium and superfluity; but there are indications that Mr Halperin really knows better and may one day set his account right. He is, for one thing, always lucid and occasionally eleg ant; he makes at least one passable joke; and he draws an interesting comparison between Isabel Archer of Henry James's

Portrait of a Lady and some of Trollope's more annoying 'political' women, in the Course of which he deploys some attractive Malice at the expense of the female intelligence.