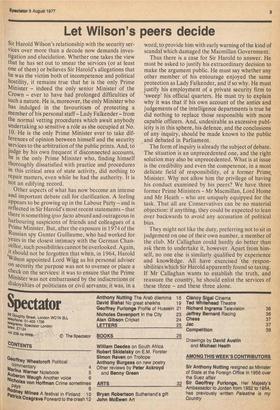 Sir Harold Wilson's relationship with the security services over more than a decade now demands investigation and elucidation. Whether one takes the view that he has set out to smear the services (or at least one of them) or believes Sir Harold's allegations that he was the victim both of incompetence and political hostility, it remains true that he is the only Prime Minister — indeed the only senior Minister of the Crown — ever to have had prolonged difficulties of such a nature. He is, moreover, the only Minister who has indulged in the favouritism of protecting a member of his personal staff — Lady Falkender — from the normal vetting procedures which await anybody undertaking so sensitive a role as she occupied at No. 10. He is the only Prime Minister ever to take differences of opinion between himself and the security services to the arbitration of the public prints. And, to Judge by his own frequent if disconnected accounts, he is the only Prime Minister who, finding himself thoroughly dissatisfied with practice and procedures In this critical area of state activity, did nothing to repair matters, even while he had the authority. It is 'not an edifying record.

Other aspects of what has now.become an intense and important debate call for clarification. A feeling appears to be growing up in the Labour Party — and is reflected in Sir Harold's most recent statements— that there is something ipso facto absurd and outrageous in harbouring suspicions of friends and colleagues of a Prime Minister. But, after the exposure in 1974 of the Russian spy Gunter Guillaume, who had worked for years in the closest intimacy with the German Chancellor, such possibilities cannot be overlooked. Again, 11t should not be forgotten that when, in 1964, Harold . Wilson appointed Lord Wigg as his personal adviser O n security the purpose was not to oversee or place a check on the services: it was to ensure that the Prime Minister was not embarrassed by the indiscretions or disloyalties of politicians or civil servants; it was, in a 11■1•1.....•••••■■•■.

word, to provide him with early warning of the kind of scandal which damaged the Macmillan Government.

Thus there is a case for Sir Harold to answer. He must be asked to justify his extraordinary decision to make the argument public. He must say whether any other member of his entourage enjoyed the same protection as Lady Falkender, and if so why. He must justify his employment of a private security firm to 'sweep' his official quarters. He must try to explain why it was that if his own account of the antics and judgements of the intelligence departments is true he did nothing to replace those responsible with more capable officers. And, undesirable as excessive publicity is in this sphere, his defence, and the conclusions of any inquiry, should be made known to the public • and debated in Parliament.

The form of inquiry is already the subject of debate. The situation is an unprecedented one, and the right solution may also be unprecedented. What is at issue is the credibility and even the competence, in a most delicate field of responsibility, of a former Prime, Minister. Why not allow him the privilege of having his conduct examined by his peers? We have three former Prime Ministers — Mr Macmillan, Lord Home and Mr Heath — who are uniquely equipped for the task. That all are Conservatives can be no material objection: if anything, they could be expected to lean over backwards to avoid any accusation of political bias.

They might not like the duty, preferring not to sit in judgement on one of their own number, a member of the club. Mr Callaghan could hardly do better than ask them to undertake it, however. Apart from himself, no one else is similarly qualified by experience and knowledge. All have exercised the responsibilities which Sir Harold apparently found so taxing. If Mr Callaghan wants to establish the truth, and reassure the country, he should enlist the services of these three — and these three alone.