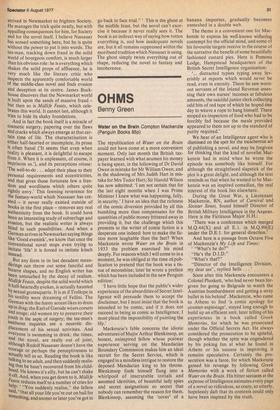 Water on the Brain Compton Mackenzie (Penguin Books 85p) The republication of Water on the Brain could not have come at a more convenient moment. Only last month the British taxpayer learned with what acumen his money is being spent, in the following of Dr David Owen in mistake for Mr William Owen, and in the shadowing of Mrs Judith Hart in mistake for Mrs Tudor Hart; Sir Harold Wilson has now admitted: 'I am not certain that for the last eight months when I was Prime Minister I knew what was happening, fully, in security.' I have an idea that the richness of the comic diversion provided by all this bumbling more than compensates for the quantities of public money frittered away in providing it, but the challenge which this presents to the writer of comic fiction is a desperate one indeed: how to make the fiction more laughable than the fact? When Mackenzie wrote Water on the Brain in 1933 the problem exercised his mind deeply. For reasons which I will come to in a moment, he was obliged at the time of publication to pretend that the book was a tissue of moonshine; later he wrote a preface which has been included in the new Penguin 'I have little hope that the public's wider experience of the absurdities of Secret Intelligence will persuade them to accept the disclaimer, but I must insist that the book is intended to be comic, and if it does not succeed in being as comic as Intelligence, I must plead the impossibility of painting the Mackenzie's fable concerns the idiotic adventures of Major Arthur Blenkinsop, an honest, uninspired fellow whose postwar experience serving on the Mendacian Boundary Commission makes him an ideal recruit for the Secret Service, which is engaged in a mindless intrigue to restore the deposed Mendacian king to his throne. Blenkinsop finds himself flung into a whirlpool of inscrutable initials and assumed identities, of beautiful lady spies and secret assignations so secret that nobody can remember the reason for them. Blenkinsop, assuming the 'cover' of a banana importer, gradually becomes enmeshed in a double web.

The theme is a convenient one for Mackenzie to express his well:known withering contempt for the official mind, and some of his favourite targets receive in the course of the narrative the benefit of some beautifully fashioned custard pies. Here is Pomona Lodge, Hampstead headquarters of the British Secret Intelligence organisation: distracted typists typing away feverishly at reports which would never be read, even in eternity. There he saw wornout servants of the Inland Revenue assessing their own nurses' incomes at fabulous amounts, the suicidal junior clerk collecting odd bits of red tape of which he hoped one day to weave a rope to hang himself. There moped ex-inspectors of food who had to be forcibly fed because the meals provided appeared to them not up to the standard of purity required.'

We hear of an Intelligence agent who is dismissed on the spot for the treacherous act of publishing a novel, and may be forgiven for thinking that the kind of novelist Mackenzie had in mind when he wrote the episode was somebody like himself, For although the straightfaced slapstick of the plot is a great delight, and although the text reminds us that when he wanted to be Mackenzie was an inspired comedian, the real interest of the book lies elsewhere.

During the Great War, a Lieutenant Mackenzie, RN, author of Carnival and Sinister Street, found himself Director of British Military Intelligence in the Aegean. Here is the Fictitious Major 1-1.1-I.: 'There was a conference which merged M.Q,44(X) and all E.1. in M.Q.99(E) under the D.E.1. for general direction.'

And here is a passage from Octave Five of Mackenzie's My Life and Times: '"What's he do?"

"Director of the Intelligence Division, my dear ass", replied Sells . '

Soon after this Mackenzie encounters a Colonel Plunkett, 'who had never been forgiven for going to Belgrade to watch the Austrian bombardment and getting a stray bullet in his behind'. Mackenzie, who came to Athens to find 'a comic apology for counter-espionage', stayed long enough to build up an efficient unit, later telling of his experiences in a book called Greek Memories., for which he was prosecuted under the Official Secrets Act. He always considered the prosecution to be spiteful, though whether the spite was engendered by his poking fun at what he found in Athens or his success in improving it remains speculative. Certainly the prosecution was a farce, for which Mackenzie gained his revenge by following Greek Memories with a work of fiction called Water on the Brain. His bitter sarcasm at the expense of Intelligence animates every page of a novel so ridiculous, so crazy, so utterly, hopelessly daft that its contents could only have been inspired by the truth.