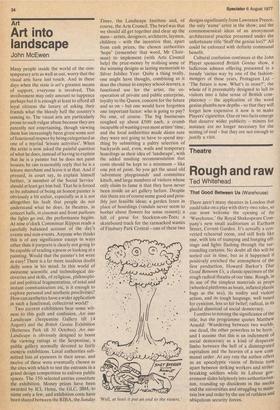 Many people inside the world of the contemporary arts as well as out, worry that the visual arts have lost touch. And in these days when the state is art's greatest means of support, everyone is involved. This involvement may only amount to tuppence perhaps but it is enough at least to afford all loyal citizens the luxury of asking their friends what the bloody hell the country's coming to. The visual arts are particularly prone to such vulgar abuse because they are patently not entertaining, though viewing them has increasingly been given some sort of functional respect by being categorised as one of a myriad `leisure activities'. When the artist is now asked the painful question of what he does, instead of having to explain that he is a painter but he does not paint houses, he can reasonably reply that he is a leisure merchant and leave it at that. And if pressed, in court say, to explain himself further, `a member of the Social Service' should at least get him bail. That he is forced to be ashamed of being an honest painter is obviously a bit unfair, especially as it is not altogether his fault that people do not understand what he does. In theatres, in concert halls, in cinemas and front parlours the lights go out, the performance begins. At nine o'clock Commissar Rippon reads a carefully balanced account of the day's events and non-events. Anyone who thinks this is of any significance except in ways other than it purports is clearly not going to be capable of reading a poem or looking at a painting. Would that the painter's lot were as easy! There is a far more insidious doubt daily sown in his mind. In this world of awesome scientific and technological discoveries and skills, of religious, philosophical and political fragmentation, of total and instant communication etc, is it enough to explore personal and aesthetic proclivities? How can aesthetics have a wider application in such a functional; collectivist world?

Two current exhibitions bear some witness to this guilt and confusion, Art into Landscape (Serpentine Gallery till 14 August) and the British Genius Exhibition (Battersea Park till 30 October). Art into Landscape is obviously designed to boost the viewing ratings at the Serpentine, a public gallery normally devoted to fairly esoteric exhibitions. Local authorities submitted lists of eyesores in their areas, and twelve of these were eventually chosen as the sites with which to test the entrants in a grand design competition to enliven public spaces. The 150 selected entries constitute the exhibition. Money prizes have been awarded by ICI, Heinz, the GLC, IBM, to name only a few, and exhibition costs have been shared between the RIBA, the Sunday Times, the Landscape Institute and, of course, the Arts Council. The brief was that we should all get together and clear up the mess — artists, designers, architects, laymen, children — with the incentive that, apart from cash prizes, the chosen authorities 'hope' (remember that word, Mr Chairman) to implement (with Arts Council help) the prize-money by realising some of the winning designs as lasting memorials to Silver Jubilee Year. Quite a thing really, one might have thought, combining as it does the chance to employ school-leavers, a functional use for the artist, the cooperation of private and public enterprise,

• loyalty to the Queen, concern for the future and so on — but one would have forgotten one important factor: who is going to pay? No one, of course. The big businesses coughed up about £500 each, a crumb incapable of wasting even most artists' time; and the local authorities made damn sure they were not going to have to spend anything by submitting a paltry selection of backyards and, even, walls and temporary hoardings as their idea of 'landscape', with the added insulting recommendation that costs should be kept to a minimum — like one pot of paint. So you get the usual old 'adventure playgrounds' and committee kitsch, and large numbers of visitors whose only claim to fame is that they have never been inside an art gallery before. Despite this there are of course some good and possibly just feasible ideas: a garden fence in place of hoardings (vandals never seem to bother about flowers for some reason); a hill of gorse for Stockton-on-Tees; a skateboard track for the tarmacked wastes of Finsbury Park Central — one of these two designs significantly from Lawrence Preece, the only 'name' artist in the show; and the commonsensical ideas of an anonymous architectural practice presented under the unfortunate title 'Stuff the genius loci?' All could be enforced with definite communal benefit.

Cultural confusion continues at the John Player sponsored British Genius show, a ludicrous admass offering presented in a trendy 'sixties way by one of the fashionmongers of those years, Pentagram Ltd — 'The future is now. What's in store?'; the whole of it presumably designed to lull its visitors into a false sense of British complacency — the application of the word genius plumbs new depths—so that they will forget how expensive it now is to make Players' cigarettes. One or two facts emerge that deserve wider publicity — miners for instance are no longer necessary for the mining of coal — but they are not enough to justify a visit.