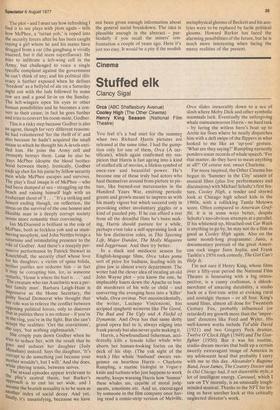 Orca (ABC Shaftesbury Avenue) Cooley High (The Other Cinema) Henry King Season (National Film Theatre) You feel it's a bad start for the summer when two Richard Harris pictures are released at the same time. I had the gumption only for one of them, Orca (A certificate), which again confirmed my suspicion that Harris is fast ageing into a kind of stuffed elk of movies, a lifeless symbol of once-raw and beautiful power. He's become one of those truly bad actors who haul themselves around from picture to picture, like burned-out mercenaries in the Hundred Years War, emitting periodic grunts and growls meant to impress us with his manly vigour but which succeed only in provoking either involuntary giggles or a kind of puzzled pity. If he can afford a rest from all the dreadful films he's been making, Harris should pasture for a while, perhaps even take a self-appraising look at his few distinctive roles, in This Sporting Life, Major Dundee, The Molly Maguires and Juggernaut. And then try better.

In a slack and mediocre season for English-language films, Orca takes .,ome sort of prize for badness, leading with its glass jaw in almost every department. The writer had the clever idea of stealing an old John Wayne plot — you know the one, he implacably hunts down the Apache or bandit murderers of his wife or child — and converting the avenging hero into a 'killer' whale, Orca orcin us. Not uncoincidentally, the writer, Luciano Vincenzoni, has scripted spaghetti westerns like The Good, The Bad and The Ugly and A Fistful of Dynamite. And Orca has that same dotty grand opera feel to it, always edging into frank parody but alas never quite making it.

Harris, a Newfoundland fisherman, accidentally kills a female killer whale who aborts her human-looking foetus on the deck of his ship. (The yuk sight of the week.) Her whale 'husband' swears vengeance on heartless Harris — Charlotte Rampling, a marine biologist in Vogue-y knits and turbans who just happens to work nearby, keeps warning Harris how 'human' these whales are, capable of moral judgments, emotions etc. And so, encouraged by someone in the film company once having read a comic-strip version of Melville, Orca slides inexorably down to a sea of slosh where Moby Dick and other symbolic mammals lurk. Eventually the unforgiving whale outmanoeuvres Harris — no hard task — by luring the witless hero's boat up to Arctic ice floes where he neatly dispatches him with a deft swipe of the flippers in what looked to me like an 'up-you' gesture. 'What are they saying?' Ram pling earnestly' ponders sonar records of whale speech. 'For that matter, do they have to mean anything at all?' Of course not, sweet Charlotte.

Far more inspired, the Other Cinema has begun its 'Summer in the City' season of musical films (plus live performances and discussions) with Michael Schultz's first feature, Cooley High, a tender and shrewd look at Chicago high school kids in the 1960s, with a rollicking Tamla Motown score. Often compared to American Gra ffiti, it is in some ways better, despite Schultz's too-obvious attempts at a parallel. If his whitened-up, bleached-out Car Wash is anything to go by, he may not do a film as good as Cooley High again. Also on the same month-long programme: Janis, a documentary portrait of the great American rock singer Janis Joplin, and Frank Tashlin's 1956 rock comedy, The Girl Can't Help It.

I'm not sure if Henry King, whose films over a fifty-year period the National Film Theatre is honouring with a big retrospective, is a canny craftsman, a shlockmerchant of amazing durability, a studio hack or a first-rate artist at evoking rural and ,nostalgic themes — or all four. King's sound films, almost all done for Twentieth Century Fox, probably influenced (or retarded) my growth more than the 'important' directors like Ford and Wyler. His well-known works include Tol'able David (1921) and two Gregory Peck dramas, Twelve O'Clock High (1949) and The Gunfighter (1950). But it was his routine, studio-dream movies that built up a certain sweetly extravagant image of America in my adolescent head that probably I carry with me to this day. Alexander's Ragtime Band, Jesse James, The Country Doctor and In Old Chicago had, if not discernible style, a lot of intelligent energy. Carousel, which I saw on TV recently, is an unusually toughminded musical. Thanks to the NFT for letting us have another look at this critically neglected director's work.