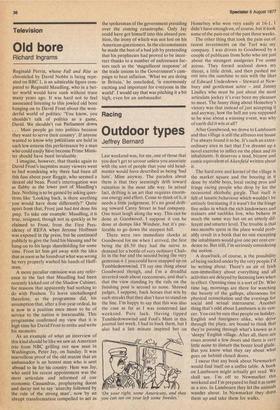 Last weekend was, for me, one of those that you don't get to savour unless you associate with the sort of people that your old headmaster would have described as being tad hats'. Mine anyway. The paradox about them is that they seemingly drift toward ruination in the most idle way. In actual fact, drifting is an art that requires enormous energy and effort. Come to think of it, it needs,a little judgement. It's no good drifting toward Carey Street in bad company. One must laugh along the way. This can be done at Goodwood. I suppose it can be done at dumps like Windsor, but it's preferable to go down the steepest hill.

There were two immediate shocks at Goodwood for me when I arrived, the first being the £6.50 they had the nerve to demand for a bottle of very ordinary Chablis in the bar and the second being the very generous 4-1 you could have snapped up on Tumbledownwind. I'll say one thing about Goodwood though, and I'm a dreadful inverted snob about racecourses, and that's that the view standing by the rails on the finishing post is second to none. Shrewd judges, I suppose, back horses that win by such streaks that they don't have to stand on the line. I'm happy to say that this was also the case as far as I was concerned last weekend. Pure luck. Having tipped Tumbledownwind and Fool's Mate in this journal last week, I had to back them, but I also had a last minute inspired bet on Homeboy who won very easily at 16-1. I didn't have enough on, of course, but it took some of the pain out of the past three weeks.

The other thing that took the pain out of recent investments on the Turf was my company. I was driven to Goodwood by a couple of publicans from Soho who are just about the strongest analgesics I've come across. They forced seafood down my throat, a little drink, and then pushed me out into the sunshine to mix with the likes of Edward Underdown — Steward at Newbury and gentleman actor — and Jimmy Lindley who must be just about the most articulate jockey it's ever been my pleasure to meet. The funny thing about Homeboy's victory was that instead of just accepting it and anyway, how the hell are you supposed to be wise about a winning event, was why of earth did it win at all?

After Goodwood, we drove to Lambourn and that village is still the alfresco nut house I've always found it to be. It's such an extraordinary area in fact that I've dreamt up a novel exercise to inflict on the place and its inhabitants. It deserves a mad, bizarre and comic equivalent of A ken field written about It.

The hard core and kernel of the village is the market square and the boozing in it done by stable boys, local racing pros and fringe racing people who drop by for the occasional alcoholic gargle. That itself is full of lunatic behaviour which wouldn't be entirely fascinating if it wasn't for the fringe five miles in which the rich landowners and trainers and suchlike live, who behave in much the same way but on an utterly different and smarter level. The trouble is that two months spent in the place would probably result in a book that no one excepting the inhabitants would give one per cent credence to. But still, I'm seriously considering the notion.

A drawback, of course, is the possibility of being sucked under by the very people I'd be writing about. There's an air of Irish non-immediacy about everything and all activities are delayed by licensing laws when in effect. Opening time is a sort of Dr. Who time lag, mornings are there for watching the beauty of the gallops, afternoons for physical resuscitation and the evenings for social and sexual intercourse. Another thing that's odd about Lam bourn is its veneer. You can be sure that people on holiday, English and foreigners alike, who drive through the place, are bound to think that they're passing through what's known as a 'sleepy' English village. After all, there are roses around a few doors and there is very little noise to disturb the booze loud glade. But you know what they say about what goes on behind closed doors.

I swear that any book about Newmarket would find itself on a coffee table. A book on Lambourn might actually get read. We shall see. I'm off to Newmarket this weekend and I'm prepared to find it as tame as a zoo. In Lambourn they let the animals wander about. In Newmarket they dress them up and take them for walks.