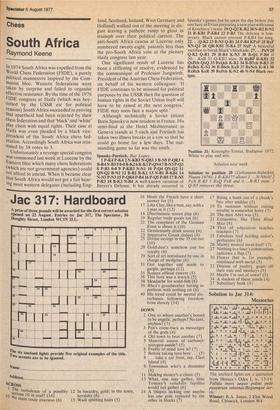 in 1974 South Africa was expelled from the World Chess Federation (F10E), a purely Political manoeuvre inspired by the Communist bloc. Western federations were taken by surprise and failed to organise effective resistance. By the time of the 1976 FIDE congress at Haifa (which was boycotted by the USSR etc for political reasons) South Africa succeeded in proving that apartheid had been rejected by their Chess federation and that `black' and `white' Play chess with equal rights. Their case at Haifa was even pleaded by a black vicepresident of the South Africa chess federation. Accordingly South Africa was reinstated by 38 votes to 3.

Unfortunately a revenge special congress Was summoned last week at Lucerne by the Eastern bloc which many chess federations (which are not government agencies) could not afford to attend. When it became clear that South Africa would not get a fair hearing most western delegates (including Eng

land, Scotland, Ireland, West Germany and Holland) walked out of the meeting in disgust leaving a pathetic rump to gloat in triumph over their political carrion. The anti-South Africa caucus at Lucerne only numbered twenty-eight, patently less than the pro-South Africa vote at the plenary Haifa congress last year.

One significant result of Lucerne has been a stiffening of resolve, evidenced by the communiqué of Professor Jungwirth, President of the Austrian Chess Federation, on behalf of his western colleagues: `If FIDE continues to be misused for political purposes by the USSR then the question of human rights in the Soviet Union itself will have to be raised at the next congress.'

FIDE may soon face a major split.' Although technically a Soviet citizen Boris Spassky is now resident in France. His semi-final at the Hotel Mediterraned in Geneva stands at 5 each and Portisch has taken two illness breaks in a row so that he could go home for a tew days. The outstanding game so far was the ninth.