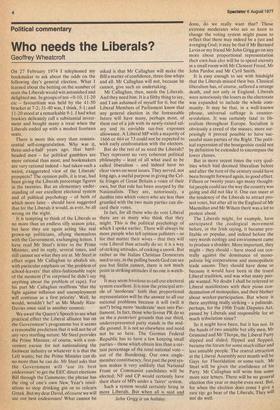 Who needs the Liberals?

On 27 February 1974 I telephoned my bookmaker to ask about the odds on the following day's general election. What 1 learned about the betting on the number of seats the Liberals would win astonished and delighted me. In groups of ten 0-10, 1 1-20 etc — favouritism was held by the 41-50 bracket at 7-2; 31-40 was, I think, 5-1; and 11-20 stood at a remarkable 9-1.1 had what bookies delicately call a subgtantial investment and bought many a treat when the Liberals ended up with a modest fourteen seats.

There is more this story than reminiscential self-congratulation'. Why was i,t, three-and-a-half years ago, that hardheaded men — for political gamblers are more rational than most, and bookmakers are very rational indeed — had taken such a weird, exaggerated view of the Liberals' prospects? The opinion polls, it is true, had been giving the Liberals percentage figures in the twenties. But an elementary understanding of our excellent electoral system and of political psychology — of both of which more later — should have suggested that for the Liberals it would, as ever, be all wrong on the night.

It is tempting to think of the Liberals as no more than an endless silly season joke, but here they are again acting like real grown-up politicians, allying themselves with the Government, exchanging letters. I have read Mr Steel's letter to the Prime Minister, and its reply, several times, and still cannot see what they are at. Mr Steel in effect urges Mr Callaghan to abolish sin, with particular emphasis on 'the problem of school-leavers' that ultra-fashionable topic of the moment (I'm surprised he didn't say anything about the problem of rape). For his part Mr Callaghan reaffirms 'that the fight against inflation and unemployment will continue as a first priority'. Well, he would, wouldn't he? as Ms Mandy RiceDavies once said in another context.

We await the Queen's Speech to see what practical effect the Liberal alliance has on the Government's programme but it seems a reasonable prediction that it will not be of any very startling nature. Mr Steel provides the Prime Minister, of course, with a convenient excuse for not nationalising the footwear industry or whatever it is that the Left wants; but the Prime Minister can do no more than he can do. Mr Steel asks that the Government will 'use its best endeavours' to get the EEC direct elections Bill through the Commons; the phrase has the ring of one's own New Year's resolutions to stop drinking gin or to relearn Greek. But my dear David, of course we will use our best endeavours! What cannot be asked is that Mr Callaghan will make the Bill a matter of confidence, three-line whips and all. Mr Callaghan will not, because he cannot, give such an undertaking.

Mr Callaghan, then, needs the Liberals. And they need him. It is a filthy thing to say, and I am ashamed of myself for it, but the Liberal Members of Parliament know that any general election in the foreseeable future will have many, perhaps most, of

them out a job with its newly-raised salary and its enviable tax-free expenses allowance. A Liberal MP with a majority of 1666 or 464 or 73 could not be expected to wish early confrontation with the electors.

But do the rest of us need the Liberals? They represent no very coherent political philosophy — least of all what used to be called liberalism — and indeed have no clear views on most issues. They served, not long ago, a useful purpose in giving the Celtic fringes of Great Britain a voice of their own, but that role has been usurped by the Nationalists. They are, notoriously, a dustbin into which voters who are less than gruntled with the two main parties can discard their votes.

In fact, for all those who do vote Liberal there are as many who think that they might. This is the political psychology of which I spoke earlier. There will always be more people who tell opinion pollsters — or for that matter their wives — that they will vote Liberal than actually do so: it is a way of striking attitudes, of cocking a snook. But rather as the Italian Christian Democrats used to say, in the polling booth God can see you but Stalin cannot, there is not much point in striking attitudes if no one is watching.

It may seem frivolous to call our electoral system excellent. It is now the principal article of 'moderate' faith that proportional representation will be the answer to all our national problems because it will (will it not?) bring more 'moderate' men into Parliament. In fact, those who favour PR do so on the a posteriori grounds that our third, underrepresented party stands in the middle ground. It is not so elsewhere and need not be so here. The German Federal Republic has to have a law keeping small parties — those which obtain less than a certain percentage of the total national vote — out of the Bundestag. Our own singlemember constituency, first past the post system makes it very unlikely that National Front or Communist candidates will be elected; NF and CP would certainly have their share of MPs under a 'fairer' system.

Such a system would certainly bring in more Liberals. But when all is said and done, do we really want that? • Those extreme moderates who are so keen to change the voting system might pause to reflect that there may indeed be a just and avenging God; it may be that if Mr Bernard Levin or my friend Mr John Grigg go on any more about proportional representation their own huis clos will be to spend eternity in a small room with Mr Clement Freud, Mr John Pardoe and Mr Cyril Smith.

It is easy enough to see with hindsight that the Liberals missed their bus. Classical liberalism has, of course, suffered a strange death, and not only in England. Liberals were notoriously the losers as the electorate was expanded to include the whole community. It may be that, in a well-known phrase, universal suffrage is counterrevolution. It was certainly fatal to liberalism throughout Europe. Socialism is obviously a creed of the masses; more surprisingly it proved possible to have successful mass parties of the Right. The political expression of the bourgeoisie could not by definition be extended to encompass the lower classes.

But in more recent times the very qualities which had doomed liberalism before and after the turn of the century could have been brought forward again, to good effect. Fifteen or twenty years ago many thoughtful people could see the way the country was going and did not like it. One can sneer at the tendency of the Liberals to attract protest votes, but after all in the England of Mr Macmillan and Mr Wilson there was a lot to protest about.

The Liberals might, for example, have anticipated the ,ecological movement before, in the Irish saying, it became profitable or popular, and indeed before the very words ecology and environment came to produce a shudder. More important, they might — they should — have stood out centrally against the dominance of monopolistic big corporations and monopolistic trade unions. They should have done so because it would have been in the truest Liberal tradition, and was what many people wanted. No doubt I shall be referred to Liberal manifestoes with their pious condemnation of monopolies, and their blather about worker-participation. But where is there anything really striking — a palinode, perhaps, for the 1906 Trade Disputes Act, passed by Liberals and responsible for so much tribulation since?

So it might have been, but it has not. In the hands of two amiable but silly men, Mr Grimond and Mr Thorpe, the Liberal Party slipped and slided, flipped and flopped, became the forum for some much sillier and less amiable people. The central attraction at the Liberal Assembly next month will be Gays for Fluoridation or some such. Mr Steel will be given the confidence of his Party. Mr Callaghan will write him some more nice letters. There will be no general election this year or maybe even next. But, for when the election does come I give a rare tip: go bear of the Liberals, They will not do well.