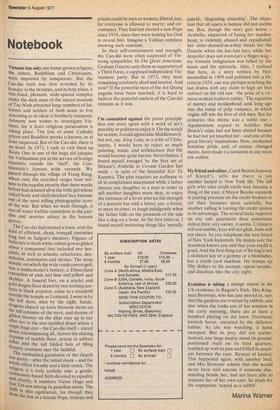 Vietnam has only one home-grown religion; the others, Buddhism and Christianity, were imported by conquerors. But the Cao-dai faith was first revealed by its founder in the twenties, and its holy place, a tree-lined, pleasant, wide-spaced complex under the dark mass of the sacred moutatn of Tay-Ninh attracted large numbers of followers and settlers of both sexes to live according to its ideal of brotherly harmony. Amnesty now wishes to investigate Vietnam, for it fears religious persecution is taking place. The fate of some Catholic Priests and Buddhist monks is known, or at least suspected. But of the Cao-dai, there is no. word. In 1972,1 rode to visit them up Route One in one of the huge old jalopies the Vietnamese put at the service of foreign reporters outside the 'shelf', the Continentale's famous wide veranda. We Passed through the village of Trang Bang, Where only the scorched verges bore witness to the napalm atrocity that three weeks before had skinned alive the little girl whose naked body and shell-shocked face became one of the most telling photographic icons of the war. But when we went through, it was all water buffalo somnolent in the paddies and sentries asleep in the banana groves.

The Cao-dai had created a town, with the kind of efficient, clean, tranquil amenities long lost to Saigon's memory. Figures of believers in fresh white cotton gowns glided about a compound that included two hosPitals, as well as schools, refectories, dorMitories, seminaries and shrines. The main temple, on which the wide roads converged, was a confectioner's fantasy, a Disneyland concoction of pink and lime and yellow and skyblue. A funeral bier, on a scarlet and gold dragon float drawn by two trotting acolYtes in black pyjamas, came to a standstill outside the temple as I entered. I went in by the left door, men by the right. Inside, dragons chased up lotus blossom stems on the tall columns of the nave, and dozens of gilded thrones on the altar rose up in tier after tier to the star-studded dome where a single huge eye — the Cao-dai itself — stared d0' encompassing all. Across the shining exPanse of marble floor, priests in saffron I-Pbes and the tall folded hats of Ming oynasty courtiers met the faithful. ,The unabashed garishness of the church was pretty — after the initial shock — and the "91e effect friendly and a little comic. The religion is a truly catholic one: a gentle, c..°Mmunity-based faith devoted to equality ;rid charity, it numbers Victor Hugo and `1,at-sen among its guardian saints. The la. ith is also egalitarian, for though they draw the line at a female Pope, bishops and

priests could be men or women; liberal, too, for everyone is allowed to marry; and circumspect. They had not elected a new Pope since 1934, since they were waiting for God to reveal him. Imagine a Vatican conclave showing such restraint.

In their self-containment and strength, the Cao-dai were often suspected of Vietcong sympathies. In The Quiet American, Graham Greene casts them as supporters of a Third Force, a supposed independent Vietnamese party. But in 1972, they were remaining resolutely aloof and neutral. And now? If the powerful men of the An Quang pagoda have been touched, it is hard to believe the peaceful enclave of the Cao-dai remains as it was.

I'm committed against the purist principle that one must agree with a work of art's morality or politics to enjoy it. On the watch for sexism, I could appreciate Middlemarch, but not, say, King Lean; as a critic of Christianity, I would have to reject so much painting, music, and architecture that life would become quite barren. Nevertheless, I found myself enraged by the first act of Strauss's Arabella at Covent Garden last week — in spite of the beautiful Kin i Te Kanewa. The plot requires an audience to sit in complaisant acceptance while a father dresses one daughter as a man in order to sell another daughter more dear, to enjoy

the entrance of a lover who on the strength . ot a portrait has sold a forest, yes, a forest, to meet its sitter; to laugh indulgently when the father falls on the proceeds of the sale like a dog on a bone. In the first interval, I found myself muttering things like 'morally putrid 'disgusting absurdity'. The objection that all opera is fantasy did not soothe me. But, though the story gets worse — Arabella, suspected of losing her maidenhead, is violently abused and repudiated; her sister-dressed-as-a-boy heads for the Danube when she has lost hers, while her despoiler does not even earn a finger-wag — my feminist indignation was lulled by the music and the spectacle. Also, I realised that here, in a story written by Hofmannsthal in 1909 and polished into a libretto in 1928, one was perhaps watching the last drama with any claim to high art that centred on the old saw. 'the price of a virtuous woman is above rubies.' The equation of money and maidenhead sank long ago into the sump of pulp romance, in Which virgins still win the love of rich men. But for centuries this theme was a noble one — Agamemnon argued to Achilles that Briseis's value had not been altered because he had not yet touched her — and one of the great literary inspirations. Now, awakened feminine pride, and, of course, changed mores, have made it a nonsense in any modern author.

My friend and editor, Carol Brown Janeway of Knopf's, tells me there is yet another hazard to New York life. The call girls who take credit cards may become a thing of the past, if Mayor Beame succeeds in putting pressure on the credit brokers to vet their licensees more carefully, but another calling is turning the credit system to its advantage. The several locks required on any safe apartment door sometimes defeat their very owner, it seems. Cylinders will not tumble, keys will not glide, bolts will not shoot. So you telephone the new breed of New York locksmith. He makes sure the doorman knows you and that your credit is good. And the first thing out of his bag is not a skeleton key or a gemmy or a blowlamp, but a credit card machine. He stamps up fifty dollars to his account, opens 'sesame, and dissolves into the city night.

Evolution is taking a strange course in the US residence in Regent's Park. Mrs Kingman Brewster, who has just moved in, says that the gardens are overrun by rabbits, and that when she looks out of her window in the early morning, there are at least a hundred playing on the lawn. Overhead, kestrels hover, attracted by the delicious babies. As she was watching, a hawk swooped. But its prey did not scatter. Instead, one large mopsy stood its ground, positioned itself on its hind quarters, reached up with its paw and biffed its assailant between the eyes. Retreat of kestrel. This happened again, with another bird, and Mrs Brewster admits that she would never have told anyone if someone else, standing beside her, had not been able to reassure her of her own eyes. So much for t he expression 'scared as a rabbit'.