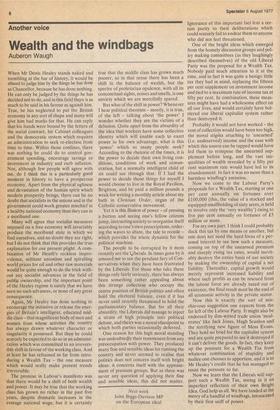 Wealth and the windbags

When Mr Denis Healey stands naked and trembling at the bar of history, it would be absurd to judge him by the things he has done as Chancellor, because he has done nothing. He can only be judged by the things he has decided not to do, and in this field there is as much to be said in his favour as against him. True, he has neglected to put the British economy in any sort of shape and many will give him bad marks for that. He can reply that his hands were bound by the fetters of the social contract, his Cabinet colleagues and the democratic system which requires an administration to seek re-election from time to time. Within those confines, there was nothing he could do to control government spending, encourage savings or investment in industry and curb inflation. Nor, although few people will agree with me, do I think this is a particularly good moment in history to have a prosperous economy. Apart from the physical ugliness and devastation of the human spirit which modern prosperity brings, there can be no doubt that socialists in the unions and in the government could work greater mischief in a healthy national economy than they can in a moribund one.

Many will agree that socialist measures imposed on a free economy will invariably produce the moribund state in which we find ourselves, and no doubt they are right, but I do not think that this provides the true explanation for our present plight. A combination of Mr Heath's reckless improvidence, militant unionism and spiralling world prices for oil and other raw materials would be quite enough to do the trick without any socialist advances in the field of public ownership, and the important point of the Healey regime is surely that we have seen no such advances, or none of any great consequence.

Again, Mr Healey has done nothing to encourage the initiative or release the energies of Britain's intelligent, educated middle class — that magnificent body of men and women from whose activities the country has always drawn whatever character or singularity it possessed. But then he could scarcely be expected to do so in an administration which was committed to an irreversible shift in favour of the working class. And at least he has refrained so far from introducing a Wealth Tax — the one measure which would really make present trends irreversible.

The promise in Labour's manifesto was that there would be a shift of both wealth and power. It may be true that the working class has grown no richer in the past five years, despite dramatic increases in the average national wage, but it is certainly true that the middle class has grown much poorer, so in that sense there has been a shift in the balance• of wealth, but the spectre of proletarian opulence, with all its concomitant sights, noises and smells, is one anxiety which we are mercifully spared.

But what of the shift in power? Whenever I hear political theorists — mostly, it is true, of the left — talking about 'the power' I wonder whether they are the victims of a delusion. Quite apart from the absurdity of the idea that workers have some collective identity which will enable each to exert power to his own advantage, what is this 'power' which so many people seek? According to the rhetoric of the times, it is the power to decide their own living conditions, conditions of work and remuneration, but a normally intelligent child of six could see through that. If I had the power to decide those things for myself I would choose to live in the Royal Pavilion, Brighton, and be paid a million pounds a week for writing a monthly article about my bath in Christian Order, organ of the Catholic conservative movement.

Yet it is this illusion of power — of pressing a ,button and seeing one's fellow citizens jump, instructing society to reorganise itself according to one's own prescriptions, ordering the waves to abate, the tide to recede — which provides the whole dynamic for the political machine.

The people to be corrupted by it most recently are the Liberals. In times gone by it amused me to see the petulant fury of Conservatives when they have been frustrated by the Liberals. For those who take these things only fairly seriously, there has always been something rather appealing about this strange collection who occupy the centre position of British politics and often hold the electoral balance, even if it has never until recently threatened to hold the parliamentary balance. But for all their. absurdity, the Liherals did manage to inject a strain of high principle into political debate, and theirs was a moral standpoint to which both parties occasionally deferred.

One reason for this high moral standing was undoubtedly their remoteness from any preoccupation with power. They produced many fine and sensible ideas for running the country and never seemed to realise that politics does not concern itself with bright ideas: it concerns itself with the appeasement of pressure groups. But as there was never any question of applying their fine and sensible ideas, this did not matter. Ignorance of this important fact lent a certain purity to their deliberations which could scarcely fail to endear them to anyone who did not feel threatened.

One of the bright ideas which emerged from the homely discussion groups and policy making committees (as they laughingly described themselves) of the old Liberal Party was the proposal for a Wealth Tax. Nobody raid much attention to it at the time, and in fact it was quite a benign little tax they had in mind, replacing the fifteen per cent supplement on investment income and tied to a maximum rate of income tax at fifty per cent. In combination, these measures might have had a wholesome effect on all our lives, and would certainly have bolstered our liberal capitalist system rather than destroyed it.

Probably it would not have worked — the cost of collection would have been too high, the moral stigma attaching to 'unearned' (i.e. undeserved) income and the ease with which this source can be tapped would have led them to reimpose the unearned supplement before long, and the vast inequalities of wealth revealed by a fifty per cent maximum rate would have led to its abandonment. In fact it was no more than a harmless windbag's emission.

For my own part, I think I could probably duck this tax by one means or another, but one does not need the hard focus of a personal interest to see how such a measure, coming on top of the unearned premium and sharply rising tax rates, would inevitably destroy the entire basis of our society by making the ownership of capital a net liability. Thereafter, capital growth would merely represent increased liability and where such profits as can be rescued from the labour force are already taxed out of existence, the final result must be the end of all economic activity in the private sector.

Now this is exactly the sort of mischievous suggestion one expects from the far left of the Labour Party. It might also be endorsed by dim-witted trade union 'moderates' like Jack Jones, Hugh Scanlon and the terrifying new figure of Moss Evans. They hold no brief for the capitalist system and are quite prepared to see it destroyed if it can't deliver the goods. In fact, they keep up the pressure for a Wealth Tax from whatever combination of stupidity and malice one chooses to apportion, and it is to Mr Healey's credit that he has managed to resist the pressure so far.

Now we learn that the Liberals will support such a Wealth Tax, seeing in it an imperfect reflection of their own Bright Idea. God help us all. We have landed at the mercy of a handful of windbags, intoxicated by their first sniff of power.