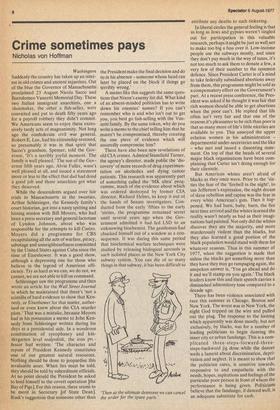 Washington Suddenly the country has taken up an interest in old crimes and ancient injustices. Out of the blue the Governor of Massachusetts proclaimed 23 August Nicola Sacco and Bartolomeo Vanzetti Memorial Day. These two Italian immigrant anarchists, one a shoemaker, the other a fish-seller, were convicted and put to death fifty years ago for a payroll robbery they didn't commit. We Americans seem to enjoy these excessively tardy acts of magnanimity. Not long ago the confederate civil war general, Robert E. Lee, had his citizenship restored, so presumably it was in that spirit that Sacco's grandson, Spenser, told the Governor, 'It's a terribly joyful moment. The family is well pleased.' The son of the Governor fifth years ago, Alvin Fuller, wasn't well pleased at all, and issued a statement more or less to the effect that dad had dond a good job and those anarchists got whal they deserved.

While the descendents argued over fair trials in Massachusetts in the twenties, Arthur Schlesinger, the Kennedy family's court historian, got into a nasty spitting and hissing session with Bill Moyers, who had been a press secretary and general factotum of Lyndon Johnson, about who was responsible for the attempts to kill Castro. Moyers did a programme for CBS recapitulating all the acts of warfare, piracy, sabotage and unneighbourliness committed by the United States against Cuba since the time of Eisenhower. It was a good show, although a depressing one for those who believe in the legend of American efficiency. Try as hard as we can, we do not, we cannot, we are not able to kill on command.

Schlesinger saw the programme and then

wrote an article for the Wall Street Journal in which he maintained that there's 'not a scintilla of hard evidence to show that Kennedy, or Eisenhower for that matter, author

ised or even knew about the CIA murder

plots.' That was a mistake, because Moyers had in his possession a memo to John Kennedy from Schlesinger written during his days as a presidential aide. In a wondrous combination of sycophancy and kindergarten level realpolitik, the iron pm . fessor had written: 'The character and repute of President Kennedy constitutes one of our greatest natural resources. Nothing should be done to jeopardise this invaluable asset. When lies must be told, they should be told by subordinate officials. At no point should the President be asked to lend himself to the covert operation [the Bay of Pigs]. For this reason, there seems to be merit in Secretary lof State Dean]. Rusk's suggestion that someone other than

the President make the final decision and do so in his absence — someone whose head can later be placed on the block if things go terribly wrong.'

A memo like this suggests the same questions that Nixon's enemy list did. What kind of an absent-minded politician has to write down his enemies' names? If you can't remember who is and who isn't out to get you, you best go fish-selling with the Vanzetti family. By the same token, why do you write a memo to the chief telling him that he mustn't be compromised, thereby creating the one piece of evidence which will assuredly compromise him?

There have also been new revelations of old CIA crimes. Admiral Stansfield Turner, the agency's director, made public the 'discovery' of more records of drug experimentation on alcoholics and dying cancer patients. This research was apparently part of something called the `MK ultra' programme, much of the.evidence about which was ordered destroyed by former CIA, director, Richard Helms, to keep it out ot the hands of Senate investigators. Conducted from the early 'fifties to the early 'sixties, the programme remained secret until several years ago when the Government admitted it had. fed LSD to an unknowing biochemist. The gentleman (lad chucked himself out of a window as a consequence. It was during this same period that biochemical warfare techniques were studied by releasing biological aerosols in such isolated places as the New York City subway system. You can die of so many things in that subway, it has been difficult to attribute any deaths to such tinkering.

In liberal circles the general feeling is that as long as Jews and gypsies weren't singled out for participation in this valuable research, perhaps it might be just as wellpot to make too big a fuss over it. Low-income people use the subways mostly, and since they don't pay much in the way of taxes, it's not too much to ask them to donate a few, a very few of their number to the cTnmon defence. Since President Carter is of a mind to take federally subsidised abortions away from them, this programme might be sold as a compensatory effort on the Government's part. At a recent press conference, the President was asked if he thought it was fair that rich women should be able to get abortions when the poor can't. He replied that life often isn't very fair and that one of the reasons it's pleasanter to be rich than poor is that so many more of life's little niceties are available to you. This annoyed the upper echelon women in his administration — departmental under-secretaries and the like — who met and issued a dissenting statement. On top of that the heads of several major black organisations have been complaining that Carter isn't doing enough for their clientele.

But American whites aren't afraid. of blacks as they once were. Prior to the 'sixties the fear of the 'firebell in the night', to use Jefferson's expression, the night dream of slave rebellion and rapine was the fear in every white American's guts. Then it happened. We had burn, baby, burn, the fire next time arrived and the whites learned the reality wasn't nearly as bad as their imaginations had painted. Not only did the whites discover they are the majority, and more murderously violent than the blacks, but they also learned a good portion of the black population would stand with them for whatever reasons. Thus in this summer of 1977, when the suggestion is made that unless the blacks get something more than they have they may go rampaging again, the

unspoken answer is, 'You go ahead and do it and we'll stamp on you again.' The black leaders know this and their speech carries a diminished admonitory tone compared to a decade ago.

There has been violence associated with race this summer in Chicago, Boston and New York. The worst was in New York, the night God tripped on the wire and pulled out the plug. The response to the looting which apparently was done mostly, but not exclusively, by blacks, was for a number of leading politicians to begin dancing the inner city or urban fandango. This is a com plicated three-steps-forward-threesteps-backward jig done while the dancer wails a lament about discrimination, depri vation and neglect. It is meant to show that the politician cares, is sensitive towards, responsive to and empathetic with the needs, hopes, aspirations and feelings of the particular poor person in front of whom the performance is being given. Politicians believe that the fandango, if danced well, is an adequate substitute for cash.