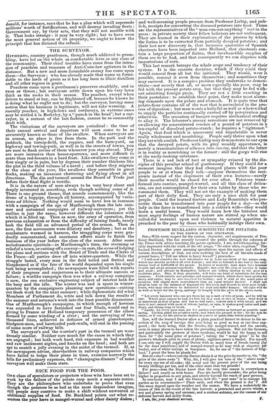 Sin—With every respect for the station, character, and acquirements of Pro- fessor Buckland, who has recently tlivoured the public through the columns of the Times with advice touching the potato epidemic, I am, notwithstanding, for- cibly impressed with the truth of the old adage, " Ne sutor ultra crepidam." The learned Doctor, after some amusing speculations upon the nature and effects of various descriptions of food, not even omitting the best of all biscuits made of ground bones, (" Tell me where is fancy bread?") proceeds- ,. I will now consider the best substitutes for at least one-third of the potato crop, which has already perished all over Europe ; and this in Ireland is the loss of the only winter food of 2,000,000 of the people. In times of scarcity, man must take unusual trouble and adopt unusual expedients. Happily, this year the crop of turnips is large and good ; and already in Hampshire farmers are selling tundra to the poor at a moderate price. This, if done generally, will form one kind of substitute for the lost potatoes. Field-carrots and parsnips and mangel-wurzel, which have been grown for sheep and cattle, may be also reserved for boiling ; and if sold at the usual price of potatoes, will supply more nourishment titan an equal weight thereof. I shall not plead in vain to the farmers of England for this boon and benefit to their poor neigh- bours, who may otherwise be distressed for food and suffer hunger. Oil-cake will do as well or better for the sheep, and may be bought with the price of the above roots.

"Let every labourer who can get them lay up a sack or two of peas, and he will be safe. Where peas cannot be had, let him lay in a sack or two of bean,: their flour is as nutritious as that of peas, and has no bad taste ; bakers mix it with bread, and we taste It not ; mixed with meal of wheat, barley, or oats, It makes good cakes and pud- dings, and strong soup or broth. • " Lastly, let every poor man get les garden vegetables as forward as possible next spring. Let him plant his potatoes early, and when the ground is dry; let the seta be entire, or If cut, let the pieces be shaken in a sieve of quick-lime before planting."

Now, will the learned Doctor allow a plain practical farmer to demur to his as- sertion of the crop of turnips this year being so good as was at one time sup- posed ; the facts being, that the Swedes, the mangel-wurzel, and the carrots, seem in many places to have taken the prevailing epidemic. But yet the farmers, and particularly the growers of these esculents, would be but too happy to aell them for "the usual price of potatoes"; taking the "usual price" to be the grower's wholesale price in years of plenty, eighteen-pence a bushel. For mysel4 I can only say I will supply the Doctor with as many tons of Swede turnip (by far the most nutritious) and of mangel-wurzel as he may wish at sixpence per bushel, and of white turnips at fourpence. So, for one of "the farmers of Eng- land," I grant the boon he pleads for. But oil-cake ?—where can the Doctor obtain it at the price he mentio-i ,s viz. "the price of the above roots"? Why, Sir' I will give ten tons of the "above roots" for every one ton of oil-cake; the usual and the present price of the one being twenty shillings per ton and of the other more than ten pounds! For peas—does the Doctor know that the crop this season is everywhere a failure? and nearly so with beans. Peas are hardly procurable; the price being higher in proportion to any grain, and utterly beyond the reach of poor persons. In conclusion, may I ask the Doctor, how the "poor man" is to manage his garden as he recommends—" Plant early, and when the ground is dry "? All this must depend upon the weather and the season. We have a melancholy in- stance of this in the result of the late harvest: a protracted and severe winter, a

and summer, and a sunless autumn, are the uses of oar deficient harvest and sickly fruits. I am, Sir, your obedient 'errant,