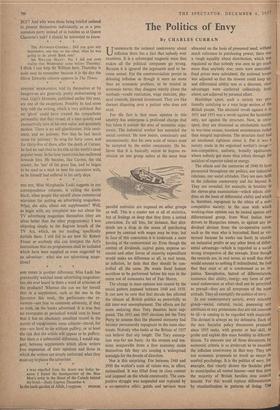 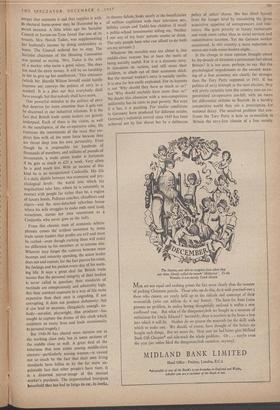 The Politics of Envy

By CHARLES CURRAN UNDERNEATH the national controversy about inflation there lies a fact that nobody ever examines. It is a submerged magnetic mass that makes all the political compasses go wrong. Because it is ignored the arguments tend to be- come unreal. For the controversialists persist in debating inflation as though it were no more than an economic problem, to be treated in economic terms; they disagree merely about the methods—credit restriction, wage restraint, phy- sical controls, directed investment. They are like doctors disputing over a patient who does not exist.

For the fact is that mass opinion in this country has undergone a profound change that has taken it outside the area of economic argu- ments. The industrial worker has amended the social contract. He now insists, consciously and unconsciously, that his own scale of values must be accepted by the entire community. He be- lieves that it is basically unjust to impose re- straints on one group unless at the same time parallel restraints are imposed on other groups as well. This is a matter not at all of statistics, but of feelings so deep that they form a settled conviction. To tell him, for instance, that divi- dends are a drop in the ocean of purchasing power by contrast with wages may be true; but in face of this conviction it is irrelevant, a mere beating of the controversial air. Even though the control of dividends, capital gains, expense ac- counts and other forms of minority expenditure would make no difference at all, in real terms, to inflation, he feels that they should be con- trolled all the same. He wants fiscal human sacrifices to be performed before his eyes in the name not of economics but of Fair Shares.

The change in mass opinion was caused by the social pattern imposed between 1940 and 1950. It can now be seen that that decade has affected the climate of British politics as powerfully as did inter-war unemployment. The effects are far more enduring than Tory theorists have sup- posed. The 1951 and 1955 elections led the Tory Party to assume that the planned economy had become permanently repugnant to the mass elec- torate. Nobody who looks at the Britain of 1957 can believe that any longer. The Tory assump- tion was far too hasty. As the stresses and ten- sions inseparable from a free economy make themselves felt they are causing a widespread nostalgia for the decade of direction.

Nor is this surprising. For between 1940 and 1950 the worker's scale of values was, in effect, nationalised. It was lifted from its class context and imposed on the whole community. The com- petitive struggle was suspended and replaced by a co-operative ethic; goods and services were allocated on the basis of presumed need, without much reference to purchasing power; there was a rough equality about distribution, which was regulated so that nobody was seen to get much more than anybody else; rents were controlled, food prices were subsidised, the national tempo was adjusted so that the slowest could keep up; and differential ability was at a discount, since advantages were conferred collectively from above, not achieved by personal effort.

. Hardships apart, such a society was pro- foundly satisfying to a very large section of the British people. The electoral revolt against it in 1951 and 1955 was a revolt against the hardships only, not against the structure. Now, in retro- spect, they are dismissed as attributable merely to war-time causes, transient excrescences rather than integral ingredients. The structure itself had an emotional rightness about it. For it was a society made in the organised worker's image— non-competitive, uniform, broadly egalitarian, where nobody got more than others through the accident of superior talent or energy.

The effects and the memories of 1940-50 have permeated throughout our politics, our industrial relations, our social attitudes. They are seen both in the inflation controversy and far beyond it. They are revealed, for example, in hostility to the eleven-plus examination—which selects chil- dren on the basis of differential ability and which is, therefore, repugnant to the ethics of a non- competitive society; in the ease with which working-class opinion can be roused against any differentiated group, from West Indian bus- drivers to Hungarian miners, or against any in- dividual deviant from the co-operative norm, such as the man who is boycotted, fined or vic- timised because he works too hard; in attacks on industrial profits or any other form of differ- ential advantage—which is regarded as a social wrong irrespective of the rewards. Even though the rewards are, in real terms, so small that they would amount to nothing if redistributed, the fact that they exist at all is condemned as an in- justice. Xenophobia, hatred of differentiation, insistence that ability, energy, any form of per- sonal endowment or effort shall not be permitted to prevail—they are all symptoms of the mass attitude. They all exemplify the politics of envy.

In our contemporary society, every minority group—social, cultural, racial, possessing any attributes or any pretensions that are not common to all—is coming to be regarded with suspicion. The deviant is always on the defensive. Each of the new Socialist policy documents produced since 1955 seeks, with greater or less skill, to probe and exploit this mass hostility to differen- tiation. To measure any of these documents by economic criteria is as irrelevant as to examine the inflation controversy in that way. They are not economic proposals so much as essays in morbid psychology. It is the politics of envy, for example, that clearly dictate the Socialist plan to municipalise all rented houses—and thus turn the majority of British families into council tenants. For this would replace differentiation by standardisation in patterns of living. The temper that animates it and that supplies it with its electoral horse-power may be illustrated by a recent instance. A little while ago the Socialist Council at Jarrow-on-Tyne found that one of its tenants, Mrs. Norah Tudor, was supplementing her husband's income by doing embroidery at home. The Council ordered her to stop. The Socialist chairman of the Housing Committee was quoted as saying, 'Mrs. Tudor is the wife of a worker who earns a good salary. She does not need the extra money. It will be no hardship to her to give up her needlework.' This utterance (which Mr. Harold Wilson himself could hardly improve on) conveys the politics of envy in a nutshell. It is a Plea not that everybody shall have enough, but that nobody shall have more.

One powerful stimulus to the politics of envy that deserves far more attention than it gets can be discerned in our industrial relations. It is the fact that British trade union leaders are grossly underpaid. Each of them is the victim, as well as the mouthpiece, of the co-operative ethic. He expresses the resentments of the mass that em- Ploys him with all the more force because they are thrust deep into his own personality. Even though he is responsible for hundreds of thousands of members, and millions of pounds of investments, a trade union leader is ,fortunate if he gets as much as £25 a week. Very often he is paid much less. With an income of this kind he is an occupational Cinderella. His life is a daily shuttle between two economic and psy- chological levels : the world into which his negotiations take him, where he is constantly in contact with people far richer than he, a region of luxury hotels, Pullman coaches, chauffeurs and cigars—and the semi-detached suburban house where his wife struggles to make ends meet (and, sometimes, nurses her own resentment as a Cinderella who never goes to the ball).

From this chronic state of economic schizo- phrenia comes the strident insistence by some trade union leaders that profits are evil and must be, curbed—even though curbing them will make no difference to his members or to anyone else. Whoever may forget the contrast between mass incomes and minority spending, the union leader does not and cannot; for the fact pierces his mind, his feelings and his pocket every day of his work- ing life. It says a great deal for British trade unions that the personal integrity of their leaders is never called in question; their standards of rectitude are conspicuously and admirably high. But their constant exposure to a way of life more expensive than their own is covoding, if not corrupting. It does not produce dishonesty; but it can lead to neurosis. (Singularly enough, no- body—novelist, playwright, film producer—has sought to capture the drama of this clash which embitters so many lives and leads occasionally to personal tragedy.) But 1940-50 has altered mass opinion not in the working class only but in some sections of the middle class as well. A great deal of the bitterness that now exists among middle-class electors—particularly among women—is caused not so much by the fact that their own living standards have fallen as by the far more un, palatable fact that other people's have risen. It is a distorted mirror-image of the manual worker's psychosis. The impoverished bourgeois household. that has had to forgo its car, its books, its theatre tickets, looks sourly at the beneficiaries of welfare capitalism with their television sets, holiday camps and Teddy-boy children. (I recall a public-school housemaster telling me, 'Neither I nor any of my boys' parents smoke or drink. The only people here who can afford to do both are my servants.') Whatever the moralist may say about it, this middle-class rancour has at least the merit of being socially useful. For it is a dynamic envy. It stimulates its victims, and still more their children, to climb out of their economic ditch. But the manual worker's envy is socially sterile. It is also far less easily explained. For its keynote is not 'Why should they have as much as us?' but 'Why should anybody have more than us?' No doubt this obsession with a non-competitive uniformity has its roots in past poverty. But even if it has, it is puzzling. For similar conditions in Germany have produced far different results. Germany's industrial revival since 1945 has been achieved not by fair shares but by a deliberate policy of unfair shares. She has lifted herself from the hunger level by stimulating the gross acquisitive appetites of entrepreneurs and risk- takers. She gave priority to luxury restaurants and mink coats rather than to social services and redistributive taxation. Yet the German worker acquiesced. In this country a mere reduction in surtax sets trade union leaders alight.

Is the change in mass opinion brought about by the decade of direction a permanent fact about Britain? It is too soon, perhaps, to say. But the psychological impediments to the smooth work- ing of a free economy are clearly far stronger than the Tory Party supposed in 1951. If the politics of envy triumph at the next election, they will pretty certainly turn this country into an im- poverished co-operative ant-hill, 'with no room for differential abilities to flourish. In a harshly competitive world they are a prescription for national decay. The unsolved problem that con- fronts the Tory Party is how to re-establish in Britain the envy-free climate of a free society.