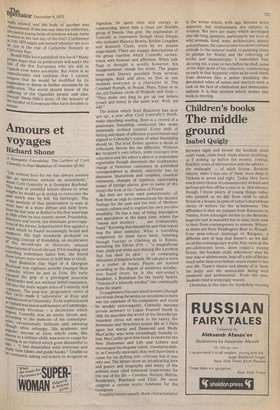 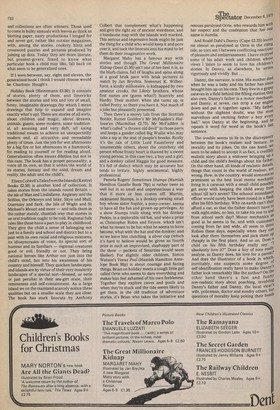 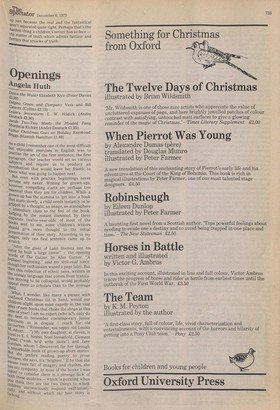 Between eight and eleven the bookish child really reads, reads hard, reads almost anything, as if stoking up before the moony, critical, finickity years of adolescence and the advent — the onslaught — of adult fiction. Bookish infants, when I was one of them, were deep in Dickens at seven and eight. Today they have much more choice of contemporary writers and perhaps put him off for a year or sc. Not always, though. I know plenty of young things today who jumped, as we did, from child to adult fiction in abound, in spite of today's marvellous choice of writers for the in-betweens. The difference is that we jumped from Ransome to Tolstoy, from schoolgirl stories to the Bront6s; leaps not just in maturity but in time, from now to then, from contemporary to remote. Whereas theirs are from Paddington Bear to Waugh, from prep-school Jennings to Burgess, a different sort of leap that doesn't, as we did, avoid the contemporary world. Nor, even at the pre-adolescent level, does today's young fiction; the bookish child, whichever way he may leap at adolescence, leap off a pile of books much taller than ever before, much closer to his own life. There's choice and plenty of it, both the pulpy and the memorable being well produced and professional. Even the non_bookish child is winningly wooed.

Christmas is the time for bookshop wooing

and collections are often winners. These used to come in bulky annuals with leaves as thick as blotting paper, nasty productions I longed for and never got, rather like outsize magazines, with, among the stories, cookery hints and crossword puzzles and pictures produced by joining up dots. Today they are more literate, but present-givers, foxed to know what particular book a child may like, fall back on what seem to be generalised ones.

If I were between, say, eight and eleven, the generalised book I think I would choose would be Charlotte Hough's

Holiday Book (Heinemann £3.50). It consists of stories, plenty of them, and limericks between the stories and lots and lots of small, funny, imaginable drawings (by which I mean drawings that help to expand and imagine exactly what's up). There are stories of all sorts, about children and magic, about dreams, animals, giants, some modern, some traditional, all amusing and very deft, all using traditional means to achieve an unexpectedly modern end, all attractive and rereadable plenty of times. Just the job for wet afternoons by a big fire or hot afternoons in a hammock; for reading to yourself or for reading aloud. Generalisation often means dilution but not in this case. The book has a proper personality, a voice all its own, so that it unites the world of its stories, fantasy and the solid, dream and reality, the adult and the child's.

Eileen Colwell's Tales from theIslands (Kestrel Books £2.50) is another kind of collection. It takes stories from the islands round Britain — the isle of Man and Lindisfarne, Anglesey and the Scillies, the Orkneys and Islay, Skye and Mull, Guernsey and Sark, the Isle of Wight and St Michael's Mount and more — and tells them in the rather stately, chantish way that stories in an oral tradition ought to be told. Regional folk tales like these have a part to play in childhood. They give the child a sense of belonging not just to a family and school and district but to a past with its own racial and religious mixtures, its idiosyncrasies of voice, its special sort of humour and its familiars — regional creatures good or evil, friendly or not. They bring national heroes like Arthur not just into the child's mind, but into his awareness of his country and himself. They quicken landscapes; and islands are by virtue of their very insularity landscapes of a special sort—blessed, or eerie or just peculiar in their sea-girt state, their remoteness and self-containment. As a large island we on the mainland scarcely notice these qualities but on a smaller scale they are clear. The book has stark linocuts by Anthony

Colbert that complement what's happening and give the right air of ancient weirdness, and a handsome map with the islands well marked. This serious and impressive book might be just the thing for a child who would keep it and pore over it, and tuck the linocuts into his mind to let them do their imaginative work.

Margaret Mahy has a famous way with stories and though The Great Millionaire Kidnap (Dent £1.95) isn't one of her best it is, as the blurb claims, full of laughs and spins along at a good brisk pace with brisk pictures to match by Jan Brychta. Somerset K. Wilberforce, a kindly millionaire, is kidnapped by two amateur crooks, the Likely brothers, whose first names are (guess what?) Scarcely and Hardly. Their mother, when she turns up, is called Pretty, so there you have it. Not much of a joke but pleasantly presented.

Then there's a snowy tale from the Scottish Border, Rumer Godden's Mr McFadden's Hallowe'en (Macmillan £2.75). Mr McFadden is what's called "a thrawn old devil" in those parts and keeps a gander called Big Wullie who may take a nip at the seat of people's breeks. Really, it's the tale of Little Lord Fauntleroy and innumerable others, about the crotchety old person whose frosty heart is thawed by a sweet young person; in this case two, a boy and a girl, and a donkey called Haggis for good measure. It's full of dialect which may be accurate but tends to irritate, highly sentimental, highly professional.

Pamela Rogers' Sometimes Stumps (Hamish Hamilton Gazelle Book 70p) is rather twee as well but in so small and unpretentious a way that it more or less comes off. Martin, nicknamed Stumps, is a donkey-owning small boy whose sister Sophie, a pony-owner, seems to have all the fun and grown-up privileges. At a show Stumps trails along with his donkey Perkin, in a deplorable old hat, and wins a prize as Christopher Robin and Eeyore, which isn't what he meant to be but what he seems to have become, what with the hat and the donkey; and so we leave him clutching a silver cup (which it's hard to believe would be given as fourth prize in such an improvised, slaphappy part of the show — packets of Smarties would seem likelier). For slightly older children, Simon Watson's Venus Pool (Hamish Hamilton Antelope Book 95p) is about courage and facing things. Brian on holiday meets a tough little girl called Orrie who seems to dare everything and makes him feel ashamed of his own feebleness. Together they explore caves and pools and when they're stuck and the tide seems likely to get them, in the old tradition of adventure stories, it's Brian who takes the initiative and rescues paralysed Orrie, who rewards him with, her respect and the confession that her real name is Aurelia.

And Roald Dahl's Danny (Cape £2.25) leaves me almost as paralysed as Orrie in the rising tide, so torn am I between conflicting reactions of pleasure and embarrassment. I have enjoYed some of his adult work and children whose views I listen to seem to love his children s stories. In Danny, as elsewhere, he writes vigorously and vividly. But ...

Danny, the narrator, is nine. His mother died when he was a baby and his father has since brought him up on his own. They live in a gYPaY caravan in a field behind the filling station theY also own. Danny's father is a motor mechanic, and Danny, at seven, can strip a car engine down and put it together again. "My father, without the slightest doubt, was the most marvellous and exciting father a boy everY had," says Danny at the beginning, and be repeats it word for word in the book's last sentence.

The trouble seems to lie in the discrepanor between the book's realism and fantasy, its morality and its jokes. On the one hand, we seem to be asked to accept it as fact, a crediblY realistic story about a widower bringing LIP a child and the child's feelings about his father. On the other hand, all kinds of realistic details, things that count in the world of realism, are wrong. How, in the country, would someone as prominent as the best local motor mechanic living in a caravan with a small child possiblY get away with keeping the child away from school till he's seven? The sch000l attendance officer would surely have been round in a flash after his fifth birthday. Why on earth can't they afford a car, so that the father doesn't have te walk eight miles, no less, to take his son to and from school each day? Motor mechanics as good as he seems to be, and with customers coming from far and wide, all seem to drive Rollses these days, especially when they can look after them themselves and pick them UP cheaply in the first place. And so on. Does child on his fifth birthday really say: I absolutely love it?" Does a boy of nine reallY, analyse, as Danny does, his love for a parent. And does the illustrator of a book in which; inevitably, one suspects some degree °,` self-identification really have to make DannY s father look remarkably like the author? On the other hand there's a fast and funnY non-realistic story about poaching, involvil Danny's father and Danny, the local vicar s wife, policeman, doctor and sundry others, hut questions of morality keep poking their heads

UP just because the real and the fantastical aren't separated quite right. Perhaps that's the hardest thing a children's writer has to face — the matter of truth which admits fantasy and fantasy that smacks of truth.