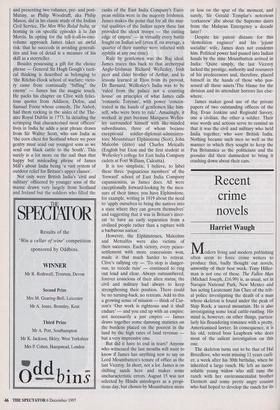 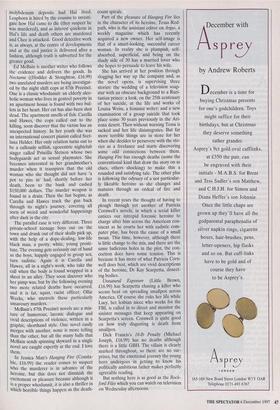 Modern living and modern publishing often seem to force crime writers to produce thin, badly thought out novels, unworthy of their best work. Tony Hiller- man is not one of these. The Fallen Man (Michael Joseph, £16.99) is, as usual, set in Navajos National Park, New Mexico and has acting Lieutenant Jim Chee of the trib- al police investigating the death of a man whose skeleton is found under the peak of Ship Rock, a sacred mountain. He is also investigating some local cattle-rustling. His mind is, however, on other things, particu- larly his floundering romance with a pretty, Americanised lawyer. In consequence, it is his old, retired boss Leaphorn who does most of the salient investigation on this one.

The skeleton turns out to be that of Hal Breedlove, who went missing 11 years earli- er, a week after his 30th birthday, when he inherited a large. ranch. He left an incon- solable young widow who still runs the ranch with her environmentalist brother Dermott and some pretty angry cousins who had hoped to develop the ranch for its molybdenum deposits had Hal lived. Leaphorn is hired by the cousins to investi- gate how Hal came to die (they suspect he was murdered), and as interest quickens in Hal's life and death others are murdered and Chee is attacked. Good detective work is, as always, at the centre of developments and at the end justice is delivered after a fashion, although truth is subverted for the greater good.

Ed McBain is another writer who follows the evidence and delivers the goods. In Nocturne ((Hodder & Stoughton, £16.99) two unrelated murders are being investigat- ed by the night shift cops at 87th Precinct. One is a classic whodunnit: an elderly alco- holic woman who lives in genteel poverty in an apartment house is found with two bul- lets in her heart. Her cat has also been shot dead. The apartment smells of fish. Carella and Hawes, the cops called out to the killing, soon discover that the victim has an unexpected history. In her youth she was an international concert pianist called Svet- lana Helder. Her only relation turns out to be a callously selfish, egocentric nightclub singer called Priscilla Stetson whose two bodyguards act as sexual playmates. She becomes interested in her grandmother's murder when it transpires that the old woman who she thought did not have 'a pot to piss in' had, shortly before her death, been to the bank and cashed $150,000 dollars. The murder weapon is found in a drain. Then the fun begins, as Carella and Hawes track the gun back through its night's journey, covering all sorts of weird and wonderful happenings after dark in the city.

The parallel case is very different. Three private-school teenage boys out on the town and drunk out of their skulls pick up, with the help of a dope-dealing, low-life black man, a pretty, white, young prosti- tute. The evening gets seriously out of hand as the boys, happily engaged in group sex, turn sadistic. Again it is Carella and Hawes, all in a night's work, who take the call when the body is found wrapped in a sheet in an alley. They soon discover who her pimp was, but by the following evening two more related deaths have occurred, and it is fat, squat, racist officer, 011ie Weeks, who unravels these particularly unsavoury murders.

McBain's 87th Precinct novels are a mix- ture of humorous, laconic dialogue and vivid descriptions of violence, written in a graphic, shorthand style. One novel easily merges with another, none is more telling than the other, but all the many balls that McBain sends spinning skyward in a single novel are caught expertly at the end. I love them.

In Jessica Man's Hanging Fire (Consta- ble, £16.99) the reader comes to suspect who the murderer is in advance of the heroine, but this does not diminish the excitement or pleasure because although it is a proper whodunnit, it is also a thriller in which horrible things happen as the death- count spirals.

Part of the pleasure of Hanging Fire lies in the character of its heroine, Tessa Red- path, who is the assistant editor on Argus, a weekly magazine which has recently acquired a new owner. Her self-image is that of a smart-looking, successful career woman. In reality she is plumpish, self- absorbed, superficial, and being on the shady side of 30 has a married lover who she hopes to persuade to leave his wife.

She has arrived at her position through slogging her way up the company and, as the novel opens, is supervising three stories: the wedding of a television soap- star with an obscure background to a Ruri- tanian prince; a look, on the 25th centenary of her suicide, at the life and works of Louisa Weiss, a feminist writer; and a new examination of a group suicide that took place some 30 years previously in the Ari- zona desert. Then without warning Tessa is sacked and her life disintegrates. But far more terrible things are in store for her when she decides to persevere with the sto- ries as a freelance and starts discovering some odd connections between them. Hanging Fire has enough deaths (some the conventional kind that draw the story on as clues, others shocking) to make this a rounded and satisfying tale. The other plus is following the odyssey of a not particular- ly likeable heroine as she changes and matures through an ordeal of fire and death.

In recent years the thought of having to plough through yet another of Patricia Cornwell's novels, in which a serial killer entices our intrepid forensic heroine to charge after him across the American con- tinent as he courts her with sadistic com- puter play, has been the cause of a small moan. This time, however, although there is little change to the mix, and there are the same ludicrous holes in the plot, the con- coction does have some tension. This is because it has more of what Patricia Corn- well does best, which are vivid descriptions of the heroine, Dr Kay Scarpetta, dissect- ing bodies.

Unnatural Exposure (Little Brown, £16.99) has Scarpetta chasing a killer who seems bent on spreading smallpox across America. Of course she risks her life while Lucy, her lesbian niece who works for the FBI, is called in to direct and monitor the sinister messages that keep appearing on Scarpetta's screen. Cornwell is quite good on how truly disgusting is death from smallpox.

Dick Francis's 10-lb Penalty (Michael Joseph, £16.99) has no deaths although there is a little GBH. The villain is clearly marked throughout, so there are no sur- prises, but the emotional journey the young hero undergoes in getting to know his politically ambitious father makes perfectly agreeable reading.

But nothing here is as good as the Rock- ford Files which you can watch on television on Wednesday afternoons.