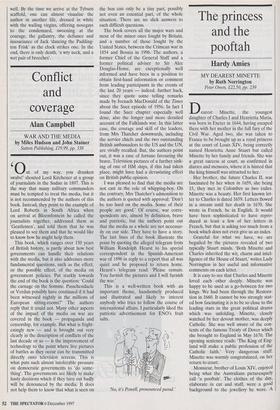 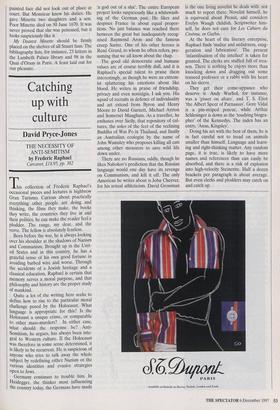 The princess and the pooftah

MY DEAREST MINE I I E by Ruth Norrington Peter Owen, £22.50, pp. 239 Dearest Minette, the youngest daughter of Charles I and Henrietta Maria, was born in Exeter in 1644, having escaped there with her mother in the full fury of the Civil War. Aged two, she was taken to France to be brought up as a royal princess at the court of Louis XIV, being correctly named Henrietta Anne Stuart but called Minette by her family and friends. She was a great success at court, as confirmed in diaries and memoirs, where it is hinted that the king himself was attracted to her.

Her brother, the future Charles II, was fascinated by her when in 1659, she being 15, they met in Colombes as two exiles. Minette was a beauty. Her first known let- ter to Charles is dated 1659. Letters flowed in a stream until her death in 1670. She wrote in French, he in English. It would have been sophisticated to have repro- duced at least a few of her letters in French, but that is asking too much from a book which does not even give us an index.

Grateful for what we have, we are beguiled by the pictures revealed of two typically Stuart minds. 'Both Minette and Charles inherited the wit, charm and intel- ligence of the House of Stuart,' writes Lady Norrington in her useful and informative comments on each letter.

It is easy to see that Charles and Minette loved each other deeply. Minette was happy to be used as a go-between for two kings. We had been through the Restora- tion in 1660. It cannot be too strongly stat- ed how fascinating it is to be so close to the leading stars in the great political drama which was unfolding. Minette, closely watched by her devout mother, was deeply Catholic. She was well aware of the con- tents of the famous Treaty of Dover which she brought to England in May 1670. The opening sentence reads: 'The King of Eng- land will make a public profession of the Catholic faith.' Very dangerous stuff. Minette was warmly congratulated, on her return to court.

Monsieur, brother of Louis XIV, enjoyed being what the Australians picturesquely call 'a pooftah'. The clothes of the day, elaborate in cut and stuff, were a good background to the jewellery he wore. A painted face did not look out of place at court. But Monsieur knew his duties. He gave Minette two daughters and a son. Poor Minette died on 30 June 1670. It was never proved that she was poisoned, but it looks suspiciously like it.

My Dearest Minette should be firmly placed on the shelves of all Stuart fans. The bibliography lists, for instance, 23 letters in the Lambeth Palace library and 98 in the Quai d'Orsay in Paris. A feast laid out for our pleasure.