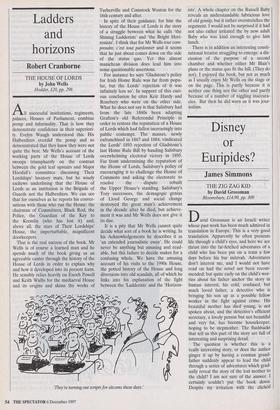 THE HOUSE OF LORDS by John Wells Hodder, £20, pp. 298 All successful institutions, regiments, palaces, Houses of Parliament, combine pomp and informality. That is how they demonstrate confidence in their superiori- ty. Evelyn Waugh understood this. His Halberdiers overdid the pomp and so demonstrated that they knew they were not quite the best. Mr Wells's account of the working parts of the House of Lords swoops triumphantly on the contrast between the gold leaf upstairs and Major Horsfall's committee discussing Their Lordships' lavatory mats, but he wisely eschews underlining that the House of Lords as an institution is the Brigade of Guards not the Halberdiers. We can see that for ourselves as he reports his conver- sations with those who run the House: the chairman of Committees, Black Rod, the Police, the Guardian of the Key to the Kremlin (who has lost it) and, above all, the stars of Their Lordships' House, the imperturbable, magnificent doorkeepers.

That is the real success of the book. Mr Wells is of course a learned man and he spends much of the book giving us an agreeable canter through the history of the House of Lords in order to explain why and how it developed into its present form. He sensibly relies heavily on Enoch Powell and Keith Wallis for the mediaeval House and its origins and skims the works of Turberville and Comstock Weston for the 16th century and after.

In spite of their guidance, for him the history of the House of Lords is the story of a struggle between what he calls 'the Shining Ladderists' and 'the Bright Hori- zonists'. I think that for Mr Wells tout corn- prendre, c'est tout pardonner and it seems that he just about comes down on the side of the status quo. Yet this almost manichean division does lead him into some questionable assertions.

For instance he says `Gladstone's policy for Irish Home Rule was far from popu- lar, but the Lords' rejection of it was infinitely less so'. In support of this curi- ous conclusion he cites Keir Hardy and Rosebery who were on the other side. What he does not say is that Salisbury had from the late 1860s been adapting Grafton's old Referendal Principle in order to restore the reputation of a House of Lords which had fallen increasingly into public contempt. The masses, newly enfranchised in 1867 and 1884, vindicated the Lords' 1893 rejection of Gladstone's last Home Rule Bill by handing Salisbury overwhelming electoral victory in 1895. Far from undermining the reputation of the House of Lords, Salisbury's policy of encouraging it to challenge the House of Commons and asking the electorate to resolve the dispute rebuilt the Upper House's standing. Salisbury's Tory successors, the demagogic genius of Lloyd George and social change destroyed the great man's achievement in the decade after he died, but achieve- ment it was and Mr Wells does not give it its due.

It is a pity that Mr Wells cannot quite decide what sort of a book he is writing. In his Acknowledgements he describes it as `an extended journalistic essay'. He could never be anything but amusing and read- able, but this failure to decide makes for a confusing whole. We have the amusing account of his visits to the 1990s House, the potted history of the House and long diversions into old scandals, all of which he links into his explanation of the fight between the `Ladderists' and the 'Horizon- `They're turning out scripts for sitcoms these days.' ists'. A whole chapter on the Russell Baby reveals an understandable lubricious love of old gossip, but it rather overstretches the argument. I would not be surprised if it had not also rather irritated the by now adult Baby who was kind enough to give him lunch.

There is in addition an interesting consti- tutional treatise struggling to emerge: a dis- cussion of the purpose of a second chamber and whether either Mr Blair's plans or the status quo fit the bill. (They do not). I enjoyed the book, but not as much as I usually enjoy Mr Wells on the stage or on the page. This is partly because it is neither one thing nor the other and partly because of a number of niggling inaccura- cies. But then he did warn us it was jour- nalism.