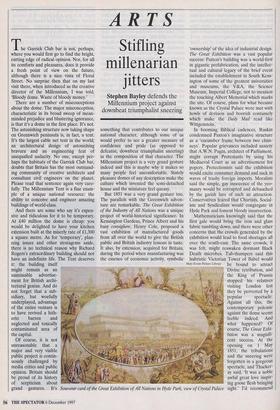 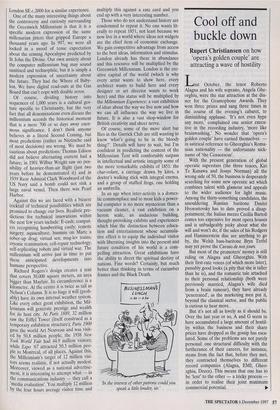 The Garrick Club bar is not, perhaps, where you would first go to find the bright, cutting edge of radical opinion. Nor, for all its comforts and pleasures, does it provide a fresh point of view on the future, although there is a nice vista of Floral Street. No surprise then that on my last visit there, when introduced as the creative director of the Millennium, I was told, Bloody dome. Waste of bloody money.'

There are a number of misconceptions about the dome. The major misconception, characteristic in its broad sweep of mean- minded prejudice and blustering ignorance, is that it's a dome in the first place. It's not. The astonishing structure now taking shape on Greenwich peninsula is, in fact, a tent. It's the largest cable net tent in the world, an architectural design of astonishing bravura and an engineering feat of unequalled audacity. No one, except per- haps the habitués of the Garrick Club bar, doubts that Britain has the most outstand- ing community of creative architects and consultant civil engineers on the planet. Please read that sentence again very care- fully. The Millennium Tent is a fine exam- ple of a unique national resource: the ability to conceive and engineer amazing buildings of world-class.

Of course, it is not unreasonable that a major and very visible public project is contin- uously challenged by media critics and public opinion. Britain should be proud of its history of scepticism about grand gestures. It's something that contributes to our unique national character, although some of us would prefer to see a greater measure of confidence and pride (as opposed to defeatist, downbeat triumphalist sneering) in the composition of that character. The Millennium project is a very grand gesture indeed and this is maybe why it makes so many people feel uncomfortable. Stately pleasure domes of any description make the culture which invented the semi-detached house and the miniature feel queasy.

But 1851 was a very grand gesture too. The parallels with the Greenwich adven- ture are remarkable. The Great Exhibition of the Industry of All Nations was a unique project of world-historical significance. In Kensington Gardens, Prince Albert and his busy consigliere, Henry Cole, proposed a vast exhibition of manufactured goods from all over the world to give the British public and British industry lessons in taste. It also, by extension, acquired for Britain, during the period when manufacturing was the essence of economic activity, symbolic Souvenir card of the Great Exhibition of All Nations in Hyde Park, view of Crystal Palace `ownership' of the idea of industrial design. The Great Exhibition was a vast popular success: Paxton's building was a world-first in gigantic prefabrication, and the intellec- tual and cultural legacy of the brief event included the establishment in South Kens- ington of some of the greatest universities and museums, the V&A, the Science Museum, Imperial College, not to mention the touching Albert Memorial which marks the site. Of course, plans for what became known as the Crystal Palace were met with howls of derision and boorish contumely which make the Daily Mail read like Wittgenstein.

In booming Biblical cadences, Ruskin condemned Paxton's imaginative structure as a 'cucumber frame between two chim- neys'. Popular grievances included anxiety that A.W.N. Pugin, architect of Parliament, might corrupt Protestants by using his Mediaeval Court as an advertisement for popery. Protectionists said the exhibition would excite consumer demand and suck in waves of trashy foreign imports. Moralists said the simple, gay innocence of the yeo- manry would be corrupted and debauched by the garish lure of such an attraction. Conservatives feared that Chartists, Social- ists and Syndicalists would congregate in Hyde Park and foment bloody insurrection.

Mathematicians knowingly said that the first gale would bring the iron and glass fabric tumbling down, and there were other concerns that the crowds generated by the exhibition would lead to food shortages all over the south-east. The same crowds, it was felt, might reawaken dormant Black Death microbes. Tub-thumpers said this hubristic Victorian Tower of Babel would Mary Ryan% Picture Library be bound to attract Divine retribution, and the King of Prussia stopped his relatives visiting London lest they be perverted by a popular spectacle. Against all this, the contemporary polemic against the dome seems feeble indeed. And what happened? Of course, The Great Exhi- bition was a magnifi- cent success. At the opening on 1 May 1851, the tribulations and the sneering were forgotten in a gorgeous spectacle, and Thacker- ay said, 'It was a noble awful great love inspir- ing goose flesh bringing sight.' I'd recommend London SE c.2000 for a similar experience.

One of the many interesting things about the controversy and curiosity surrounding the Greenwich Millennium is that it is a specific modern expression of the same millenarian jitters that gripped Europe a thousand years ago. In 997, we were all locked in a mood of tense expectation about the coming Apocalypse predicted by St John the Divine. Our own anxiety about the computer millennium bug may sound sanitised and technophile, but it is simply a modern expression of uncertainty about the future. They had the Whore of Baby- lon. We have digital read-outs at the Gas Board that can't cope with double zeros.

Of course, dividing history into sequences of 1,000 years is a cultural ges- ture specific to Christianity, but the very fact that all denominations even discuss the millennium accords the historical moment that is a mere 700 or so days away enor- mous significance. I don't think anyone believes in a literal Second Coming, but most predictions (rather as Nietzsche said of most decisions) are wrong. We must be cautious about predictions: Thomas Edison did not believe alternating current had a future; in 1901 Wilbur Wright saw no pos- sibility of heavier-than-air flight (just two years before he demonstrated it) and in 1939 Rear Admiral Clark Woodward of the US Navy said a bomb could not sink a large naval vessel. Then there was Pearl Harbor.

Against this we are faced with a bizarre cocktail of technical possibilities which are promised to change our lives. Realistic pre- dictions for technical innovations within the next few years include: E-cash; comput- ers recognising handwriting easily; remote surgery; aquaculture; humans on Mars; a sober-up drug; virtual sex; mag-lev trains; cryonic reanimation; cell-repair technology; self-replicating robots and virtual war. The millennium will arrive just in time to put these anticipated developments into humane perspective. Richard Rogers's design creates a tent that covers 30,000 square meters, an area bigger than Mayfair. Its circumference is a kilometre. At the centre it is twice as tall as Nelson's Column. It is so huge it will (prob- ably) have its own internal weather system. Like every other great exhibition, the Mil- lennium will generate prestige and wealth for its host city. At Paris 1889, 32 million saw the Eiffel Tower (itself construed as a temporary exhibition structure); Paris 1900 gave the world Art Nouveau and was visit- ed by 50.8 million people; the 1938 New York World Fair had 44.9 million visitors; while Expo '67 attracted 50.3 million peo- ple to Montreal, of all places. Against this, the Millennium's target of 12 million visi- tors seems realistic, if not actually modest. Moreover, viewed as a national advertise- ment, it is interesting to attempt what — in the communications industry — they call a `media evaluation'. You multiply 12 million by the four hours average visitor time and multiply this against a rate card and you end up with a very interesting number.

Those who do not understand history are condemned to repeat it. No one wants lit- erally to repeat 1851, not least because we now live in a world where ideas not widgets are the chief item of economic exchange. We gain competitive advantage from access to the best ideas, information and stimulus. London already has these in abundance and this resource will be multiplied by the Greenwich Millennium. London is the cre- ative capital of the world (which is why every artist wants to show here, every architect wants to build here and every designer or art director wants to work here) and this status will be multiplied by the Millennium Experience: a vast exhibition of ideas about the way we live now and how we can all influence the way we live in future. It is also a vast shop-window for British creativity and sheer nerve.

Of course, some of the more alert bar flies in the Garrick Club are still wanting to know 'what's going to be in the bloody thing?'. Details will have to wait, but I'm confident in predicting the content of the Millennium Tent will comfortably surpass in intellectual and artistic integrity some of the more remarkable exhibits of 1851: the char-volant, a carriage drawn by kites, a doctor's walking stick with integral enema, and a group of stuffed frogs, one holding an umbrella.

In an age when inter-activity is a domes- tic commonplace and to most kids a power- ful computer is no more mysterious than a vacuum cleaner, a vast exhibition on a heroic scale, an audacious building, thought-provoking exhibits and experiences which blur the distinction between educa- tion and entertainment whose accumula- tive effect is to equip the individual visitor with liberating insights into the present and future condition of his world is a com- pelling attraction. Great exhibitions have the ability to direct the spiritual destiny of nations. Fine words? Certainly, but much better than thinking in terms of cucumber frames and the Black Death.

`In the interest of other patrons could you speak a little louder, sir '