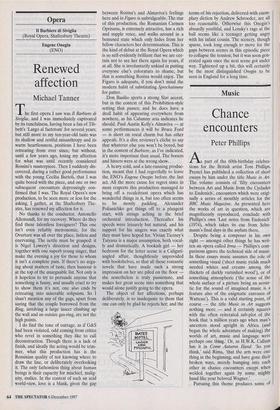 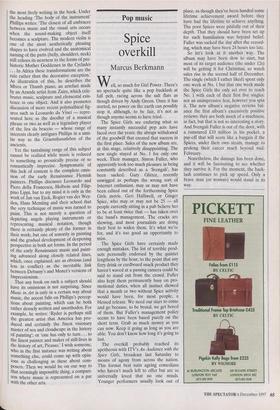 part of the 60th-birthday celebra- tions for the British artist Tom Phillips, Prestel has published a collection of short essays by him under the title Music in Art. The volume consists of 'fifty encounters between Art and Music from the Cyclades to Endenich', encounters which were origi- nally a series of monthly articles for the BBC Music Magazine. As presented here the works of art in question, which are magnificently reproduced, conclude with Phillips's own 'Last notes from Endenich' (1974), which takes its cue from Schu- mann's final days in the asylum there.

Despite being a composer in his own right — amongst other things he has writ- ten an opera called Irma — Phillips's com- parisons ignore the technical side of music. In these essays music assumes the role of something visual (sheet music yields much needed whites and creams among the thickets of darkly varnished wood'), or of something atmospheric (the sense of the whole surface of a picture being an acous- tic for the sound of imagined music is a feature also of the enigmatic canvases of Watteau'). This is a valid starting point, of course — the title Music in Art suggests nothing more — and it certainly squares with the often reiterated sub-plot of the book that 'a million years ago when man's ancestors stood upright in Africa (and began the whole adventure of making) the worlds of art, music and language were perhaps one thing.' Or, as Callum has it in Come Autumn Hand: 'So you think,' said Rima, 'that the arts were one thing in the beginning, and have gone their broken ways, merely bumping into each other in chance encounters except when welded together again by some mighty hand like your beloved Wagner.'

Pursuing this theme produces some of the most lively writing in the book. Under the heading 'The body of the instrument' Phillips writes: The closest of all embraces between music and the visual arts occurs when the sound-making object itself becomes a sculpture. The modern violin is one of the most aesthetically pleasing shapes to have evolved and the anatomical naming of the parts (belly, shoulders, neck) still echoes its nearness to the forms of pre- historic Mother Goddesses in the Cyclades In Africa these transformations are the rule rather than the decorative exception.' As illustration of this, he describes the Mbira or Thumb piano, an artefact made by an Azande artist from Zaire, which cele- brates music, sculpture and elemental exis- tence in one object. And it also promotes discussion of more recent polymathical fig- ures such as Leonardo da Vinci — repre- sented here as the doodler of a musical phrase or two as well as a legendary player of the lira da braccio — whose range of interests clearly intrigues Phillips in a simi- lar way as the Gesamtkunstleben of the ancients.

Yet the tantalising range of this subject cannot be realised while music is reduced to something so prosaically precise or so romantically imprecise. Symptomatic of this lack of content is the complete omis- sion of the early Renaissance Flemish painters. Phillips discusses Leonardo and Piero della Francesca, Holbein and Filip- pino Lippi, but to my mind it is only in the work of Jan van Eyck, Rogier van der Wey- den, Hans Memling and their school that the very technique of music was turned to paint. This is not merely a question of depicting angels playing instruments or representing musical notation, though there is certainly plenty of the former in their work; but one of sonority in painting and the gradual development of deepening perspective in both art forms. In the period of the early Renaissance music and paint- ing advanced along closely related lines, which, once explained, arc as obvious (and less in conflict) as the inevitable link between Debussy's and Monet's versions of Impressionism.

That any book on such a subject should have its omissions is not surprising. Since Music in Art is only in a certain way about music, the accent falls on Phillips's percep- tions about painting, which can be both rather densely written and unorthodox. For example, he writes: 'Ryder is perhaps still the greatest artist that America has pro- duced and certainly the finest visionary master of sea and cloudscape in the history of painting'; or 'one has only to turn . to the finest painter and maker of still-lives in the history of art, Picasso.' I wish someone, who in the first instance was writing about something else, could come up with opin- ions as challenging as these about com- posers. Then we would be on our way to that seemingly impossible thing, a compari- son where music is represented on a par with the other arts.