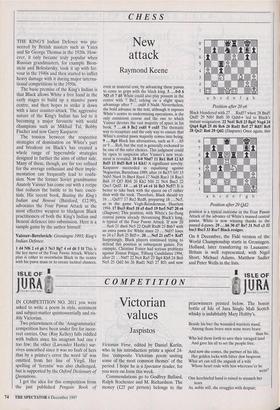 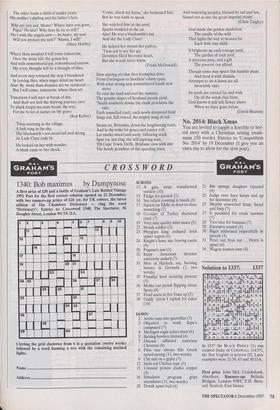 IN COMPETITION NO. 2011 you were asked to write a poem in style, sentiment and subject-matter quintessentially and ris- ibly Victorian.

Two prizewinners of the 'Anagrammatics' competition have been under fire for incor- rect entries. One (Ray Kelley) falls riddled with bullets since his anagram had one t too few; the other (Lavender Hastie) sur- vives unscathed since it was no fault of hers that by a printer's error the word 'id' was omitted from her line of Virgil. Her spelling of lerentis' was also challenged, but is supported by the Oxford Dictionary of Quotations.

1 got the idea for this competition from the just published Penguin Book of Victorian Verse, edited by Daniel Karlin, who in his introduction prints a spoof 24- line 'composite Victorian poem uniting some of the most common themes' of the period. I hope he is a Spectator reader, for you were on form this week.

Commendations go to Godfrey Bullard, Ralph Rochester and M. Richardson, The money (£25 per person) belongs to the prizewinners printed below. The bonus bottle of Isle of Jura Single Malt Scotch whisky is indubitably Mary Holtby's.

Beside his bier the wounded warriors stand, Among those brave men none more brave than he, Who led them forth to save their ravaged land And gave his all to set the people free.

And now she comes, the partner of his life, Her golden locks with bitter dew besprent. What art can tell the anguish of a wife Whose heart rode with him wheresoe'er he went?

One kerchiefed hand is raised to staunch her tears As, noble still, she struggles with despair; The other leads a child of tender years, His mother's darling and his father's heir.

'Why are you sad, Mama? Where have you gone, Papa? No kiss? Why does he lie so still?'

'He's with the angels now — be brave, my son! Will you protect me now?"Maina, I will!' (Mary Holtby) Where thou awaitest I will come tomorrow, Over the stony hill, the grassy lea, And with remembered joy, remembered sorrow, My every thought will be a thought of thee, And every step retraced the step I blundered In leaving thee, when anger dried my heart. Alas! By more than distance are we sundered - But I will come, tomorrow, where thou art.

Tomorrow I will start at break of day, And shall not halt the daylong journey, save To pluck forget-me-nots beside the way, For me to set at sunset on thy grave.

(Ray Kelley) 'Twas morning in the village, A lark sang in the sky, The blacksmith's son stood tall and strong As Lady Clare rode by.

He looked on her with wonder, A blush came to her cheek. `Come, check my horse,' she beckoned him, But he was loath to speak.

She watched him at the anvil, Sparks twinkled in the air. Alas! He was a blacksmith's lad And she the Lady Clare!

He helped her mount her palfrey, 'Twas sad to see her go; Devotion filled his rustic heart, But she would never know.

(Frank McDonald) How stirring yet that first triumphal drive From Darlington to Stockton's dusty quay. With what strong arm unnumbered bands now strive To vein the land and seal the mastery.

The granite slopes of Scotland sternly yield, 'Neath southern downs the chalk proclaims the tale; Each tunnelled vault, each newly sleepered field Sings out, full-voiced, the mighty song of rail.

Steam on, Britannia, down the lengthening track, And in thy wake let peace and justice roll. Let smoky wheel and sooty, billowing stack Spur on, not clog, the still aspiring soul, Till Cape Town, Delhi, Brisbane view with awe The heady grandeur of the speeding train, And wakening peoples, blessed by rail and law, Sound out as one the great imperial strain!

(Chris Tingley) God made the golden dandelion, The candle of the wild That lights the way to heaven for Each little tiny child.

It brightens up each cottage yard, The garden of each lord; A precious posy, and a gift The poorest can afford.

Though some may spurn this humble plant And treat it with disdain, Attempts to do it down are all Invariably vain.

Its seeds are carried far and wide On all the winds that blow; God knows it still will flower above When we have gone below.