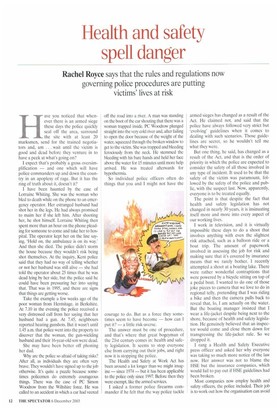 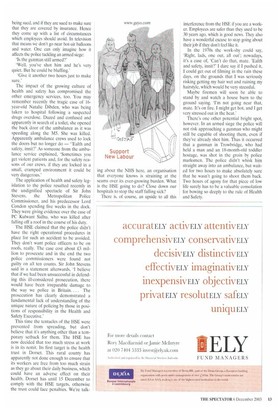 Have you noticed that whenever there is an armed siege these days the police quickly seal off the area, surround the site with at least 20 marksmen, send for the trained negotiators and, um . . . wait until the victim is good and dead before they venture in to have a peek at what's going on?

I expect that's probably a gross oversimplification — and one which will have police commanders up and down the country in an apoplexy of rage. But it has the ring of truth about it, doesn't it?

I have been haunted by the case of Lorraine Whiting. She was the woman who bled to death while on the phone to an emergency operator. Her estranged husband had shot her in the legs. He had always promised to maim her if she left him. After shooting her, he shot himself. Lorraine Whiting then spent more than an hour on the phone pleading for someone to come and take her to hospital. The operator kept her on the line saying. 'Hold on, the ambulance is on its way.' And then she died. The police didn't storm the house because they wouldn't risk being shot themselves. At the inquiry, Kent police said that they had no way of telling whether or not her husband was still alive — she had told the operator about 25 times that he was dead lying by her side, but the police said he could have been pressuring her into saying that. That was in 1995, and there are signs that things are getting worse.

Take the example a few weeks ago of the poor woman from Hermitage, in Berkshire. At 7.10 in the evening the police received a very distressed call from her saying that her husband had a gun. At 7.45, neighbours reported hearing gunshots. But it wasn't until 1.45 a.m. that police went into the property to discover that the woman, the gun-wielding husband and their 16-year-old son were dead.

She may have been better off phoning her dad.

Why are the police so afraid of taking risks? After all, as individuals they are often very brave. They wouldn't have signed up to the job otherwise. It's quite a pa771e because sometimes policemen do extremely courageous things. There was the case of PC Simon Woodrow from the Wiltshire force. He was called to an accident in which a car had veered off the road into a river. A man was standing on the boot of the car shouting that there was a woman trapped inside. PC Woodrow plunged straight into the very cold river and, after failing to open the door because of the weight of the water, squeezed through the broken window to get to the victim. She was trapped and bleeding ferociously from the neck. He stemmed the bleeding with his bare hands and held her face above the water for 15 minutes until more help arrived. He was treated afterwards for hypothermia.

So individual police officers often do things that you and I might not have the courage to do. But as a force they sometimes seem to have become — how can I put it? — a little risk-averse.

The answer must be one of procedure, and that's where that great bogeyman of the 21st century comes in: health and safety legislation. It seems to stop everyone else from carrying out their jobs, and right now it is stopping the police.

The Health and Safety at Work Act has been around a lot longer than we might imagine — since 1974 — but it has been applicable to the police only since 1997. Before then they were exempt, like the armed services.

I asked a former police firearms commander if he felt that the way police tackle armed sieges has changed as a result of the Act. He claimed not, and said that the police have always followed very strict but 'evolving' guidelines when it comes to dealing with such scenarios. Those guidelines are secret, so he wouldn't tell me what they were.

But one thing, he said, has changed as a result of the Act, and that is the order of priority in which the police are expected to consider the safety of all those involved in any type of incident. It used to be that the safety of the victim was paramount, followed by the safety of the police and public, with the suspect last. Now, apparently, everyone is to be treated equally.

The point is that despite the fact that health and safety legislation has not changed in nearly 30 years, it is insinuating itself more and more into every aspect of our working lives.

I work in television, and it is virtually impossible these days to do a shoot that involves anything with even the slightest risk attached, such as a balloon ride or a boat trip. The amount of paperwork involved in assessing the job for risk and making sure that it's covered by insurance means that we rarely bother. I recently attempted a shoot at a boating lake. There were rather wonderful contraptions that were powered by a bicycle sitting on top of a pedal boat. I wanted to do one of those joke pieces to camera that we love to do in regional telly, pretending that I was riding a bike and then the camera pulls back to reveal that, lo, I am actually on the water. But the boating manager insisted that I wear a life-jacket despite being next to the shore, because of health and safety legislation. He genuinely believed that an inspector would come and close them down for transgressing the life-jacket rule. So we dropped it.

I rang a Health and Safety Executive press officer and asked her why everyone was taking so much more notice of the law now. Her answer was not to blame the HSE but the insurance companies, which would fail to pay out if HSE guidelines had been broken.

Most companies now employ health and safety officers, the police included. Their job is to work out how the organisation can avoid being sued, and if they are sued to make sure that they are covered by insurance. Hence they come up with a list of circumstances which employees should avoid. In television that means we don't go near hot-air balloons and water. One can only imagine how it affects the police tackling an armed siege: 'Is the gunman still armed?'

'Well, you've shot him and he's very quiet. But he could be bluffing.'

'Give it another two hours just to make sure.'

The impact of the growing culture of health and safety has compromised the other emergency services, too. You may remember recently the tragic case of 16year-old Natalie Dibden, who was being taken to hospital following a suspected drugs overdose. Dazed and confused and apparently in search of a toilet, she opened the back door of the ambulance as it was speeding along the M5. She was killed. Apparently ambulance crews used to lock the doors but no longer do — "Ealth and safety, innit?' As someone from the ambulance service explained, 'Sometimes you get violent patients and, for the safety reasons of our crews, if they are locked in a small, cramped environment it could be very dangerous.'

The application of health and safety legislation to the police resulted recently in the undignified spectacle of Sir John Stevens. the Metropolitan Police Commissioner, and his predecessor Lord Condon spending five weeks in the dock. They were giving evidence over the case of PC Kulwant Sidhu, who was killed after falling off a roof in the course of his duty.

The HSE claimed that the police didn't have the right operational procedures in place for such an accident to be avoided. They don't want police officers to be on roofs, really. The case cost about £3 million to prosecute and in the end the two police commissioners were found not guilty on all ten counts. Sir John Stevens said in a statement afterwards, 'I believe that if we had been unsuccessful in defending this ill-considered prosecution, there would have been irreparable damage to the way we police in Britain. . . The prosecution has clearly demonstrated a fundamental lack of understanding of the unique nature of policing by those in positions of responsibility in the Health and Safety Executive.'

This time the tentacles of the HSE were prevented from spreading, but don't believe that it's anything other than a temporary setback for them. The HSE has now decided that too much stress at work is in its remit. Its first target is the health trust in Dorset. This rural county has apparently not done enough to ensure that its workers are free from too much strain as they go about their daily business, which could have an adverse effect on their health. Dorset has until 15 December to comply with the HSE targets, otherwise the trust could face penalties. We're talk ing about the NHS here, an organisation that everyone knows is straining at the seams over its ever-growing burden. What is the HSE going to do? Close down our hospitals to stop the staff falling sick?

There is, of course, an upside to all this interference from the HSE if you are a worker. Employees are safer than they used to be 30 years ago, which is good news. They also have a wonderful excuse to stop going about their job if they don't feel like it.

In the 1970s the work-shy could say, 'Right, lads, one out, all out'; nowadays, it's a case of, 'Can't do that, mate. 'Ealth and safety, innit?' I dare say if I pushed it, I could get out of filming in the rain these days, on the grounds that I was seriously risking getting my hair wet and ruining my hairstyle, which would be very stressful.

Maybe firemen will soon be able to stand by and watch a house burn to the ground saying, 'I'm not going near that, mate. It's on fire. I might get hot, and I get very stressed out in the heat.'

There's one other potential bright spot, however. In an armed siege the police will not risk approaching a gunman who might still be capable of shooting them, even if they've already shot him. Thus it occurred that a gunman in Trowbridge, who had held a man and an 18-month-old toddler hostage, was shot in the groin by police marksmen. The police didn't whisk him straight away into an ambulance, but waited for two hours to make absolutely sure that he wasn't going to shoot them back. Two hours of agony for that piece of low life surely has to be a valuable consolation for bowing so deeply to the rule of Health and Safety.