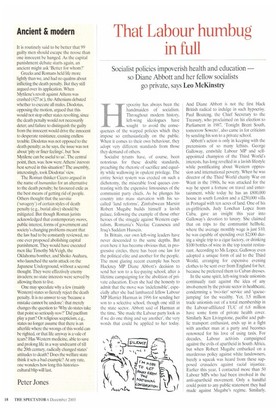 It is routinely said to be better that 99 guilty men should escape the noose than one innocent be hanged. As the capital punishment debate starts again, an ancient might ask 'Better for whom?'

Greeks and Romans held life more lightly than we, and had no qualms about inflicting the death penalty. But they still argued over its application. When Mytilene's revolt against Athens was crushed (427 nc), the Athenians debated whether to execute all males. Diodotus, opposing the motion, argued that this would not stop other states revolting, since the death penalty would not necessarily deter; and failure to distinguish the guilty from the innocent would drive the innocent to desperate resistance, causing endless trouble. Diodotus was not opposed to the death penalty; as he says, the issue was not about 'pity or finer feelings', but 'how Mytilene can be useful to us'. The central point, then, was: how were Athens' interests best served in this situation? The assembly, interestingly, took Diodotus' view.

The Roman thinker Cicero argued in the name of hurnanitas for an alternative to the death penalty; he favoured exile as the best means of getting rid of people. Others thought that the saaitia (savagely') of certain styles of death penalty (e.g., burial alive) should be mitigated. But though Roman jurists acknowledged that contemporary mores, public interest, forms of government and society's changing problems meant that the law had to be constantly reviewed, no one ever proposed abolishing capital punishment. They would have executed men like Timothy McVeigh, the Oklahoma bomber, and Shoko Asahara, who launched the sarin attack on the Japanese Underground, without a second thought. They were effectively enemy invaders; no state interests were served by allowing them to live.

One may speculate why a few (mainly Western) states so fiercely reject the death penalty. It is no answer to say 'because a mistake cannot be undone': that merely changes the question to 'Why do states take that point so seriously now?' Did pacifism play a part? Or religious scepticism, e.g., states no longer assume that there is an afterlife where the wrongs of this world can be righted, or that life anyway is a vale of tears? Has Western medicine, able to save and prolong life in a way undreamt of till the 20th century, radically changed states' attitudes to death? Does the welfare state think it sets a bad example? At any rate, one wonders how long this historicocultural blip will last.