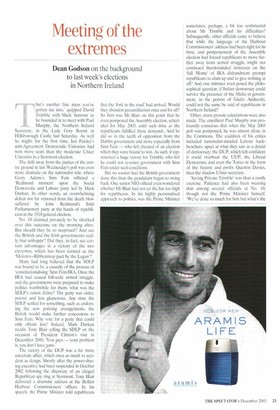 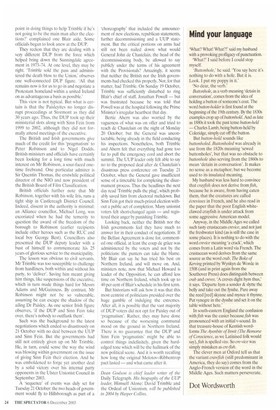 eeting of the extremes

1, hat's another fine mess you've gotten me into,' quipped David Trimble with black humour as he bounded in to meet with Paul Murphy, the Northern Ireland Secretary, in the Lady Grey Room at Hillsborough Castle last Saturday. As well he might: for the first time, Ian Paisley's anti-Agreement Democratic Unionists had won more seats than the moderate Ulster Unionists in a Stormont election.

The drift away from the parties of the centre ground in last Wednesday's poll was even more dramatic on the nationalist side, where Gerry Adams's Sinn Fein inflicted a 'Redmond moment upon the Social Democratic and Labour party led by Mark Durkan. In other words, an overwhelming defeat not far removed from the death blow suffered by John Redmond's Irish Parliamentary party at the hands of republicans in the 1918 general election.

No. 10 claimed privately to be shocked over this outcome on the morning after, But should they be so surprised? And are the British and the Irish governments really that unhappy? Did they, in fact, see certain advantages in a victory of the two extremes, which has been termed as the 'Molotov–Ribbentrop pact by the Lagan'?

Many had long believed that the SDLP was bound to be a casualty of the process of `constitutionalising' Sinn Fein/IRA. Once the IRA had ceased full-scale armed struggle, and the governments were prepared to make politics worthwhile for them, what was the SDLP's raison &etre? The party was older, poorer and less glamorous. Any time the SDLP settled for something, such as endorsing the new policing arrangements, the British would make further concessions to Sinn Fein. Why vote for a party that could only obtain less? Indeed, Mark Durkan recalls Tony Blair telling the SDLP on the occasion of President Clinton's visit in December 2000, 'You guys — your problem is, you don't have guns.'

The victory of the DUP was a far more uncertain affair, which owes as much to accident as design. Shortly after the power-sharing executive had been suspended in October 2002 following the discovery of an alleged Republican spy ring at Stormont, Tony Blair delivered a dramatic address at the Belfast Harbour Commissioners' offices. In his speech. the Prime Minister told republicans that the 'fork in the road' had arrived. Would they abandon paramilitarism once and for all? So firm was Mr Blair on this point that he even postponed the Assembly election, scheduled for May 2003, until such time as the republicans fulfilled these demands. And he did so in the teeth of opposition from the Dublin government and more especially from Sinn Fein — who felt cheated of an election which they were bound to win. As such, it represented a huge victory for Trimble, who felt he could not re-enter government with Sinn Fein under such conditions.

But no sooner had the British government done this than the pendulum began to swing back. One senior NIO official even wondered whether Mr Blair had not set the bar too high for republicans. In his highly personalised approach to politics, was the Prime Minister sometimes, perhaps, a bit too sentimental about Mr Trimble and his difficulties? Subsequently, other officials came to believe that while the language of the Harbour Commissioners' address had been right for its time, and postponement of the Assembly election had forced republicans to move further away from armed struggle, might not continued literal-minded insistence on the 'full Monty' of IRA disbandment prompt republicans to clam up and to give nothing at all? And one minister even posed the philosophical question: if Italian democracy could survive the presence of the Mafia in government, in the person of Giulio Andreotti, could not the same be said of republicans in Northern Ireland?

Other, more prosaic calculations were also made. The emollient Paul Murphy was profoundly conscious that when the May 2003 poll was postponed, he was almost alone in the Commons. The coalition of his critics included nationalist-minded Labour backbenchers, upset at what they saw as a denial of democracy; the DUP, which felt confident it could overhaul the UUP; the Liberal Democrats; and even the Tories in the form of the bizarre and prolix Quentin Davies, then the shadow Ulster secretary.

'Saving Private Trimble' was thus a costly exercise. Patience had also been wearing thin among several officials at No. 10, though not the Prime Minister himself. 'We've done so much for him but what's the point in doing things to help Trimble if he's not going to be the main man after the elections?' complained one Blair aide. Some officials began to look anew at the DUP.

They reckon that they are dealing with a very different DUP from the force which helped bring down the Sunningdale agreement in 1973-74. At one level, they may be right. 'Trimble sold the pass and administered the death blow to the Union,' observes one well-connected DUP figure. 'All that remains now is for us to go in and negotiate a Protestant homeland within a united Ireland on as advantageous a basis as possible.'

This view is not typical. But what is certain is that the Paisleyites no longer disrupt proceedings at Stormont as they did 30 years ago. Thus, the DUP took up their ministerial slots along with Sinn Fein from 1999 to 2002, although they did not formally attend meetings of the executive.

The British and Irish governments give much of the credit for this 'pragmatism to Peter Robinson and to Nigel Dodds. British ministers and officials have certainly been looking for a long time with much interest on Mr Robinson, a sour-faced onetime firebrand. One particular admirer is Sir Quentin Thomas, the erstwhile political director of the NIO and now president of the British Board of Film Classification.

British officials further note that Mr Robinson, together with his wife Iris, runs a tight ship in Castlereagh District Council. Indeed, dissent in the authority is minimal: an Alliance councillor, Michael Long, was excoriated when he had the temerity to question the award of the freedom of the borough to Robinson (earlier recipients include other heroes such as the RUC and local boy George Best). Councillors also presented the DUP deputy leader with a bust of himself to commemorate his 25 years of glorious service to the municipality.

The lesson was obvious to civil servants. Mr Trimble was too susceptible to challenge from hardliners, both within and without his party, to 'deliver', Saving him meant giving him things, like suspensions of the executive, which in turn made things hard for Messrs Adams and McGuinness. By contrast, Mr Robinson might not be so vulnerable, assuming he can escape the shadow of the ailing Dr Paisley. As one senior Irish figure observes, `if the DUP and Sinn Fein take over, there's nobody to outflank them'.

Such was the background to the latest negotiations which ended so disastrously on 21 October with no deal between the UUP and Sinn Fein. But the governments had still not entirely given up on Mr Trimble. He, in turn, could sense the way the wind was blowing within government on the issue of giving Sinn Fein their election. And he was emboldened to forge yet another deal by a solid victory over his internal party opponents in the Ulster Unionist Council in September 2003.

A 'sequence' of events was duly set for Tuesday 21 October: the two heads of government would fly to Hillsborough as part of a

'choreography' that included the announcement of new elections, republican statements, further decommissioning and a UUP statement. But the critical portions on arms had still not been nailed down: what would General John de Chastelain, the head of the decommissioning body, be allowed to say publicly under the terms of his agreement with the Provisionals? Amazingly, it seems that neither the British nor the Irish governments had checked this properly. Nor, for that matter, had Trimble. On Sunday 19 October, Trimble was sufficiently disturbed to ring Blair's chief of staff, Jonathan Powell — but was frustrated because he was told that Powell was at the hospital following the Prime Minister's irregular heartbeat that day.

Bertie Ahern was also worried by the vagueness of what was on offer and tried to reach de Chastelain on the night of Monday 20 October; but the General was uncontactable, being already in the field conducting his inspections. Nonetheless, both Trimble and Ahern felt that everything had gone too far to pull the emergency cord and abort the summit. The UUP leader only felt able to say no to the proposed deal after de Chastelain's disastrous press conference on Tuesday 21 October, when the General gave insufficient sense of a timetable for completing the disarmament process. Thus the headlines the next day read 'Trimble pulls the plug', which probably saved him from electoral meltdown. But Sinn Fein got their much-prized election without a public act of completion. Many unionist voters felt short-changed again — and registered their anger by punishing Trimble.

Looking back, neither the British nor the Irish governments feel they have much to answer for in their conduct of negotiations. If the Belfast Agreement is done for, commented one official, at least the coup de grace was administered by the voters and not by the politicians: the punters can take the blame. Mr Blair can say he has tried his best on Northern Ireland, and will move on. And, ministers note, now that Michael Howard is leader of the Opposition, he can afford less time on Northern Ireland, which took up to 40 per cent of Blair's schedule in his first term.

But historians will ask how it was that this most centrist of politicians presided over the huge gamble of indulging the extremes. After all, it is possible that the vast majority of DUP voters did not opt for Paisley out of 'pragmatism'. Rather, they may have done so because of the worsening communal mood on the ground in Northern Ireland. There is no guarantee that the DUP and Sinn Fein 'pragmatists' might be able to control things indefinitely, given the hardedged tone which will be the hallmark of the new political scene. And it is worth recalling how long the original Molotov–Ribbentrop pact lasted — and what came after it.

Dean Godson is chief leader writer of the Daily Telegraph. His biography of the UUP leader, Himself Alone: David Trimble and the Ordeal of Unionism, will be published in 2004 by Harper Collins.