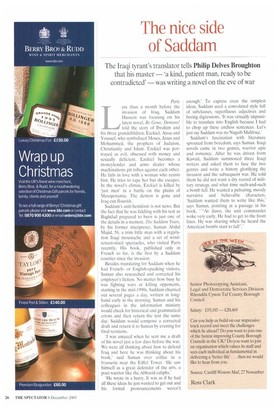 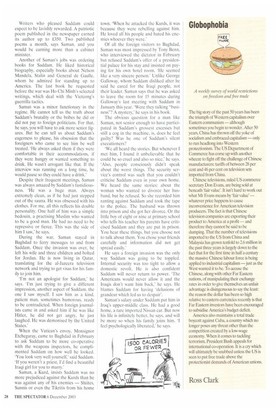 The nice side of Saddam

The Iraqi tyrant's translator tells Philip Delves Broughton that his master — 'a kind, patient man, ready to be contradicted' — was writing a novel on the eve of war Paris ess than a month before the invasion of Iraq, Saddam Hussein was focusing on his latest novel. Be Gone, Demons! told the story of Ibrahim and his three grandchildren, Ezekiel, Aissa and Youssef, who symbolised Moses, Jesus and Mohammed, the prophets of Judaism, Christianity and Islam. Ezekiel was portrayed as evil, obsessed with money and sexually deficient. Ezekiel becomes a moneylender and arms dealer whose machinations pit tribes against each other. He falls in love with a woman who resists him. He tries to rape her hut she escapes. In the novel's climax, Ezekiel is killed by 'just men' in a battle on the plains of Mesopotamia. The demon is gone and Iraq can flourish.

Saddarn's anti-Semitism is not news. But the fact that he was fiddling with his text as Baghdad prepared to burn is just one of the details in a memoir. The Saddam Years, by his former interpreter, Saman Abdul Majid, 58, a trim little man with a regulation Iraqi moustache and a set of windscreen-sized spectacles, who visited Paris recently. His book, published only in French so far, is the first by a Saddam courtier since the invasion.

Besides translating for Saddam when he had Frenchor English-speaking visitors, Saman also researched and corrected his employer's fiction. No matter how busy he was fighting wars or killing opponents, starting in the mid-1990s, Saddam churned out several pages a day, written in longhand early in the morning. Saman and his colleagues in the information ministry would check for historical and grammatical errors and then return the text the same day. Saddam would compose a corrected draft and return it to Saman by evening for final revisions.

'I was amazed when he sent me a draft of his novel just a few days before the war. We were all thinking about how to defend Iraq and here he was thinking about his book,' said Saman over coffee in a brasserie near the Eiffel Tower. 'He saw himself as a great defender of the arts, a poet warrior like the Abbasid caliphs.'

'He wrote in a hurry. It was as if he had all these ideas he just wanted to get out and his formal pronouncements weren't

enough.' To express even the simplest ideas, Saddam used a convoluted style full of subclauses, superfluous adjectives and boring digressions. 'It was virtually impossible to translate into English because I had to chop up these endless sentences. Let's just say Saddam was no Naguih Mahfouz.'

Saddam's fascination with literature sprouted from boredom, says Saman. Iraqi novels came in two genres, warrior epic and romance. After he was driven from Kuwait, Saddam summoned three Iraqi writers and asked them to fuse the two genres and write a history glorifying the invasion and the subsequent war. He told them he did not want a dry record of military strategy and what time such-and-such a bomb fell. He wanted a pulsating, moody narrative and believable characters. 'Saddam wanted them to write like this,' says Saman, pointing at a passage in his book. "At dawn, the unit commander woke very early. He had to get to the front lines. He was shaving when he heard the American bombs start to fair' Writers who pleased Saddam could expect to be lavishly rewarded. A patriotic poem published in the newspaper earned its author up to £350. Two published poems a month, says Saman, and you would be earning more than a cabinet minister.

Another of Saman's jobs was ordering books for Saddam. He liked historical biography, especially books about Nelson Mandela, Stalin and General de Gaulle, whom he admired for standing up to America. The last book he requested before the war was Ho Chi Minh's selected writings, which deal with the Vietcong's guerrilla tactics.

Saman was a minor functionary in the regime. He cannot tell us the truth about Saddam's brutality or the bribes he did or did not pay to foreign politicians. For that, he says, you will have to ask more senior figures. But he can tell us about Saddam's eagerness to please, his obsession that the foreigners who came to see him be well treated. 'He always asked them if they were comfortable in their accommodations, if they were hungry or wanted something to drink. He wasn't arrogant like that. If the interview was running on a long time, he would pause so they could have a drink.'

Despite their frequent meetings. Saman was always amazed by Saddam's fastidiousness. 'He was a huge man. Always extremely clean, as if he had just stepped out of the sauna. He was obsessed with his clothes. For me, all this reflects his double personality. One half of him was a simple bcdouin, a practising Muslim who wanted to be a good man. He had no need to be repressive or fierce. This was the side of him I saw,' he says.

During the war, Saman stayed in Baghdad to ferry messages to and from Saddam. Once the invasion was over, he left his wife and three children and bolted for Jordan. He is now living in Qatar, translating for the al-Jazeera television network and trying to get visas for his family to join him.

'I'm not an apologist for Saddam,' he says. 'I'm just trying to give a different impression, another aspect of Saddam, the one I saw myself. I saw him as a kind, patient man, sometimes humorous, ready to be contradicted. When foreign journalists came in and asked him if he was like Hitler, he did not get angry, he just laughed. He was demonised by the United States.'

When the Vatican's envoy, Monsignor Etchegaray, came to Baghdad in February to ask Saddam to be more co-operative with the weapons inspectors, he complimented Saddam on how well he looked. 'You look very well yourself,' said Saddam. 'If you weren't a priest, I'd find a beautiful Iraqi girl for you to marry.'

Saman, a Kurd, insists Saddam was no more prejudiced against the Kurds than he was against any of his enemies — Shiites, Sunnis or even the Tikritis from his home town. 'When he attacked the Kurds, it was because they were rebelling against him. He loved all his people and hated his enemies whoever they were.'

Of all the foreign visitors to Baghdad, Saman was most impressed by Tony Benn, who interviewed the dictator in February but refused Sadd am's offer of a presidential palace for his stay and insisted on paying for his own hotel room. 'He seemed like a very sincere person.' Unlike George Galloway, whom Saddam disliked after he said he cared for the Iraqi people, not their leader. Saman says that he was asked to leave the room for 15 minutes during Galloway's last meeting with Saddam in January this year. 'Were they talking "business"? A mystery,' he says in his book.

The obvious question for a man like Saman, not senior enough to have participated in Saddam's grossest excesses but still a cog in the machine, is, does he feel guilty? Was he one of Saddam's silent executioners?

'We all heard the stories. But whenever I met him, I found it unbelievable that he could be Sc) cruel and also so nice,' he says. 'Also, people consciously didn't speak about the worst things. The security service's control was such that you couldn't criticise Saddam even in your own home. We heard the same stories: about the woman who wanted to divorce her husband, hut he refused. So she recorded him ranting against Saddam and took the tape to the police. The husband was thrown into prison and she got her divorce. Or the little boy of eight or nine at primary school who tells his teacher his parents have criticised Saddam and they are put in prison. You hear these things, but you choose not to talk about them. You chose your friends carefully and information did not get spread easily.'

He says a foreign invasion was the only way Saddam was going to be toppled. Internal security was too tight to allow a domestic revolt. He is also confident Saddam will never return to power. 'The Americans would never allow it and the Iraqis don't want him back.' he says. He blames Saddam for having 'delusions of grandeur which led us to despair'.

Saman's salary under Saddam put him in Iraq's upper-middle class. He had a good home, a rare imported Nissan car. But now his life is infinitely better, he says, and will be more so when his family joins him. 'I feel psychologically liberated,' he says.