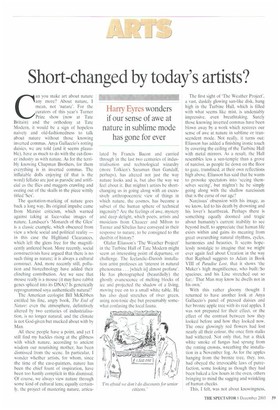 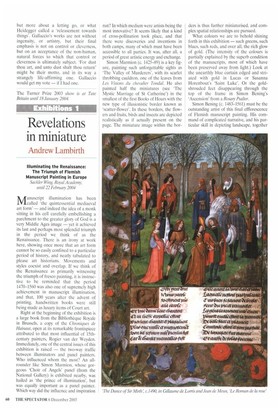 Can you make art about nature any more? About nature, I mean, not 'nature'. For the curators of this year's Turner Prize show (now at Tate Britain) and the orthodoxy at Tate Modern, it would be a sign of hopeless naivety and old-fashionedness to talk about nature without those knowing inverted commas. Anya Gallaccio's rotting daisies, we are told (and it seems plausible), have as much to do with the cut-flower industry as with nature. As for the terribly knowing Chapman Brothers, for them everything is in inverted commas. The inflatable dolls enjoying (if that is the word) fellatio are just as parodic and artificial as the flies and maggots crawling and oozing out of the skulls in the piece wittily titled 'Sex'.

The quotation-marking of nature goes back a long way. Its original impulse came from Marxist criticism, which warned against taking at face-value images of nature. Landseer's 'Monarch of the Glen' is a classic example, which obscured from view a whole social and political reality — in this case the Highland Clearances, which left the glens free for the magnificently antlered beast. More recently, social constructivists have argued that there is no such thing as nature; it is always a cultural construct. And, more recently still, pollution and biotechnology have added their clinching contribution, Are we sure that mouse really is a mouse (it may have rabbit genes spliced into its DNA)? Is genetically reprogrammed soya authentically natural?

The American ecologist Bill McKibben entitled his fine, angry book, The End of Nature: even the atmosphere, definitively altered by two centuries of industrialisation, is no longer natural, and the climate is not God-given but mucked about with by Man.

All these people have a point, and yet I still find my hackles rising at the glibness with which nature, according to ancient wisdom our nourishing mother, has been dismissed from the scene. In particular, I wonder whether artists, for whom, since the time of the cave-painters, nature has been the chief fount of inspiration, have been too hastily complicit in this dismissal. Of course, we always view nature through some kind of cultural lens; equally certainly, the project of mastering nature, articu lated by Francis Bacon and carried through in the last two centuries of industrialisation and technological wizardry (more Tolkien's Saruman than Gandalf, perhaps), has altered not just the way nature looks and is, but also the way we feel about it. But mightn't artists be shortchanging us in going along with an excessively anthropocentric view of things in which nature, the cosmos, has become a subset of the human sphere of technical ingenuity? Are the feelings of awe, mystery and deep delight, which poets, artists and musicians from Chaucer and Milton to Turner and Sibelius have conveyed in their response to nature, to he consigned to the dustbin of history?

Olafur Eliasson's 'The Weather Project' in the Turbine Hall of Tate Modern might seem an interesting point of departure, or challenge, The Icelandic–Danish installation artist professes an 'interest in natural phenonema . . . [which is] almost profane'. He has photographed (beautifully) the ghostly evanescence of melting blocks of ice and projected the shadow of a living, moving tree on to a small white table. He has also dyed stretches of river green, using non-toxic dye but presumably somewhat confusing the local fauna. The first sight of 'The Weather Project', a vast, duskily glowing sun-like disk, hung high in the Turbine Hall, which is filled with what seems like mist, is undeniably impressive, even breathtaking. Surely those knowing inverted commas have been blown away by a work which restores our sense of awe at nature in sublime or transcendent mode. Not really, it turns out: Eliasson has added a finishing ironic touch by covering the ceiling of the Turbine Hall with metal mirrors. As a result, the Hall resembles less a sun-temple than a grove of narcissi, as people lie down on the floor to gaze, transfixed, at their own reflections high above. Eliasson has said that he wants to provoke spectators into 'seeing themselves seeing', but mightn't he be simply going along with the shallow narcissism that is the curse of our age?

Narcissus' obsession with his image, as we know, led to his death by drowning and his lover's heartbreak. Perhaps there is something equally doomed and tragic about humanity's current inability to see beyond itself, to appreciate that human life exists within and gains its meaning from great overarching natural rhythms, cycles, harmonies and beauties. It seems hopelessly nostalgic to imagine that we might ever again feel about Creation in the way that Raphael suggests to Adam in Book VIII of Paradise Lost, that it shows 'the Maker's high magnificence, who built/So spacious, and his Line stretched out so far;! That Man may know he dwells not in his own.'

With this rather gloomy thought I returned to have another look at Anya Gallaccio's panel of pressed daisies and her bronze apple tree with its real apples. I was not prepared for their effect, or the effect of the contrast between how they looked before and how they looked now. The once glowingly red flowers had lost nearly all their colour, the once firm stalks had withered. Not only that, but a thick white smoke of fungus had sprung from the rotting crowns, wreathing the installation in a November fog. As for the apples hanging from the bronze tree, they, too, had obeyed the irrevocable laws of putrefaction, some looking as though they had been baked a few hours in the oven, others bringing to mind the sagging and wrinkling of human cheeks.

This, I felt, was not about knowingness, but more about a letting go, or what Heidegger called a 'releasement towards things'. Gallaccio's works are not without ingenuity, or artistry, but their final emphasis is not on control or cleverness, but on an acceptance of the non-human, natural forces to which that control or cleverness is ultimately subject. 'For dust thou art, and unto dust shalt thou return' might be their motto, and in its way a strangely life-affirming one. Gallaccio would get my vote — if I had one.