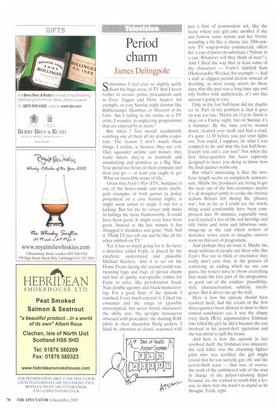 ornetimes I feel ever so slightly guilty Oabout the huge areas of TV that I never bother to review: police procedurals such as Frost. Taggart and Prime Suspect, for example; or cosy Sunday-night dramas like Ballykissangel, Heartbeat or Monarch of the Glen. Am I failing in my duties as a TV critic, I wonder, in neglecting programmes that are enjoyed by so many?

But when I find myself accidentally watching one of them all my doubts evaporate. The reason I don't watch these things, I realise, is because they are evil. They squander airtime and money; they waste talent; they're as transient and unsatisfying and pointless as a Big Mac. You spend two hours in their company and then you go — at least you ought to go: 'What an incredible waste of life.'

Given that Foyle's War (ITV, Sundays) is one of the better-made and more intelligent examples of both genres (a police procedural on a cosy Sunday night), it might seem unfair to single it out for a kicking. But for me its virtues only make its failings the more blameworthy. It could have been good. It might even have been great. Instead at the last minute it has shrugged it shoulders and gone: `Nah. Sod it. Think I'll just sell out and be like all the other rubbish on TV.'

Yet it has so much going for it. Its hero, a detective called Foyle, is played by the excellent, understated and plausible Michael Kitchen. And it is set on the Home Front during the second world war, meaning bags and bags of period charm and lots of quirky war-specific crimes for Foyle to solve, like petrol-ration fraud, Nazi double-agentry and black-marketeering. For a good hour of the episode watched. I very much enjoyed it. I liked the costumes and the range of (possibly stereotypical, but never mind) characters: the shifty spiv; the up-tight bureaucrat obsessed with procedure; the dashing RAF pilots in their sheepskin flying jackets. I liked its attention to detail, seasoned with just a hint of postmodern wit, like the scene where one girl asks another if she can borrow some nylons and her friend, sounding a bit like a cheesy late 20th-century TV soap-powder commercial, offers her a can of paint-on substitute (`Nylons in a can. Whatever will they think of next?'). And [liked the way that at least some of the characters — Foyle's sidekick Sam (Honeysuckle Weeks), for example — had a stab at clipped period diction instead of deciding, as most young actors do these days, that the past was a long time ago and why bother with authenticity, it's not like anyone's going to care.

Only in the last half-hour did my doubts set in. Part of the problem is that it goes on way too late. Maybe an 11 p.m. finish is okay on a Friday night, but on Sunday it's a bummer. By the time you've wound down, cleaned your teeth and had a read, it's gone 11.30 before you put your lights out. You could, I suppose, do what I was tempted to do and skip the last half-hour. Except you can't, can you? Not when the first three-quarters has been expressly designed to leave you dying to know how the final quarter works out.

But what's infuriating is that the twohour length seems so completely unnecessary. Maybe the producers are trying to get the wear out of the hire-costumes; maybe it's all designed subtly to evoke the intense tedium Britain felt during the 'phoney war'; but as far as I could see the whole thing could comfortably have been compressed into 90 minutes, especially once you'd excised a few of the red herrings and silly twists and turns and laborious summings-up at the end which writers of detective series seem to imagine viewers want on this sort of programme.

And perhaps they do want it. Maybe the many millions of people out there who like Foyle's War are so thick or insensitive they really don't care that, in the process of contriving an ending which no one can guess, the writers have to throw everything that made the first part of the programme so good out of the window: plausibility, style, characterisation, subtlety, intelligence. But it drives me up the wall.

Here is how the episode should have resolved itself, had the events of the first three-quarters been allowed to draw to their natural conclusion: yes, it was the chippy (very likely IRA), argumentative Irishman who killed the girl; he did it because she was involved in his petrol-theft operation and she was about to spill the beans.

And here is how the episode in fact resolved itself: the Irishman was innocent; the real killer was the charming fighter pilot who was terrified the girl might reveal that he was secretly gay; oh, and the petrol-theft scam — that was, of course, the work of the embittered wife of the man in charge of the petrol-rationing depot because, er, she wanted to teach him a lesson, to show him she wasn't as stupid as he thought. Yeah, right.