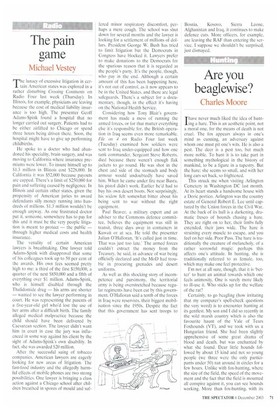 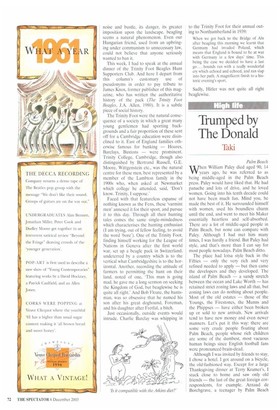 Ihave never much liked the idea of huntling a hare. This is an aesthetic point, not a moral one, for the means of death is not cruel. The fox appears always in one's mind as cunning, an adversary against whom one must pit one's wits. He is also a pest. The deer is a pest too, but much more noble. To hunt it is to take part in something mythological in the history' of mankind, to be a figure in a tapestry. But the hare: she seems so small, and with her long ears set back, so frightened.

This struck me when visiting Arlington Cemetery in Washington DC last month. At its heart stands a handsome house with a Doric portico. Arlington was the country' estate of General Robert E. Lee until captured by the Union forces in the Civil War. At the back of its hall is a darkening, dramatic fresco of hounds chasing a hare, They are right on to her, their limbs fully extended, their jaws wide. The hare is straining everymuscle to escape, and you feel on her side. Poor Puss. The hare is traditionally the creature of melancholy, of a rather sorrowful magic: perhaps this affects one's attitude. In hunting, she is traditionally referred to as female, too, which may make one feel protective.

I'm not at all sure, though, that it is 'better' to hunt an animal towards which one feels animosity. One is surely more likely to ill-use it. Who sticks up for the welfare of the rat?

Certainly, to go beagling (how irritating that my computer's spell-check questions the very word) is to encounter hunting at its gentlest. My son and I did so recently in the wild marsh country which is also the favourite haunt of the Vale of Tears Foxhounds (VT), and we took with us a Hungarian friend. She had been slightly apprehensive of some great drama of blood and death, but was enchanted by what she found. Dear little hounds followed by about 15 kind and not so young people (we three were the only participants under 50) ran around in circles for a few hours. Unlike with fox-hunting, where the size of the field, the speed of the movement and the fact that the field is mounted all conspire against it, you can see hounds working. More than fox-hunting, with its

noise and bustle, its danger, its greater imposition upon the landscape, beagling seems a natural phenomenon. Even our Hungarian friend, used from an upbringing under communism to unnecessary law, could not believe that anyone seriously wanted to ban it.

This week, I had to speak at the annual dinner of the Trinity Foot Beagles Hunt Supporters Club. And here I depart from this column's customary use of pseudonyms in order to pay tribute to James Knox, former publisher of this magazine, who has written the authoritative history of the pack (The Trinity Foot Beagles, J.A. Allen, 1980). It is a subtle piece of social history.

The Trinity Foot were the natural consequence of a society in which a great many young gentlemen had sporting backgrounds and a fair proportion of these sent off for a Cambridge education were disinclined to it. East of England families otherwise famous for banking — Hoares, Barclays, Buxtons — were prominent. Trinity College, Cambridge, though also distinguished by Bertrand Russell, G.E. Moore, Wittgenstein etc., was the natural centre for these men, best represented by a member of the Lambton family in the 1900s who, when asked at Newmarket which college he attended, said, 'Don't know. Trinity, I suppose.'

Faced with that featureless expanse of nothing known as the Fens, these 'varmint men' annexed it for their sport, and pursue it to this day. Through all their hunting tales comes the same single-mindedness which characterises the hunting enthusiast (I am trying, out of fellow feeling, to avoid the word 'bore.). One of the Trinity Foot, finding himself working for the League of Nations in Geneva after the first world war, set up a beagle pack in Switzerland, undeterred by a country which is to the vertical what Cambridgeshire is to the horizontal. Another, recording the attitude of farmers to permitting the hunt on their land, noted of one, 'This man is going mad, he gave me a long sermon on seeking the Kingdom of God, but beaglewise he is quite all right.' And Bob Eloate, the huntsman, was so obsessive that he named his son after his great doghound, Foreman, and his daughter after Fretful, a bitch.

Just occasionally, outside events would intrude. Charlie Barclay was whipping in to the Trinity Foot for their annual outing to Northumberland in 1939:

When we got back to the Bridge of Aln after beagling this morning we learnt that Germany had invaded Poland, which means that England is bound to be at war with Germany in a few days' time. This being the case we decided to have a last go . hounds ran with a really wonderful cry which echoed and echoed, and ran slap into her path. A magnificent finish to a historic evening's sport.

Sadly, Hitler was not quite all right beaglewise.