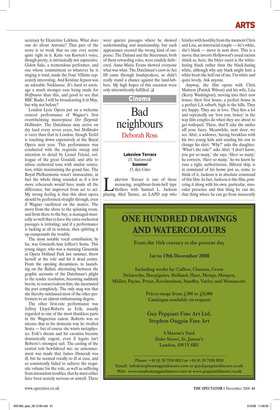 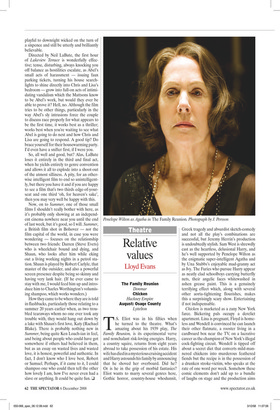 Lakeview Terrace is one of those menacing, neighbour-from-hell type thrillers with Samuel L. Jackson playing Abel Turner, an LAPD cop who bristles with hostility from the moment Chris and Lisa, an interracial couple — he’s white, she’s black — move in next door. This is a movie that inverts Hollywood’s usual racism shtick as, here, the bitter racist is the whitehating black rather than the black-hating white, although why any black might hate a white beats the hell out of me. I’m white and quite lovely. Ask anyone.

Anyway, the film opens with Chris Mattson (Patrick Wilson) and his wife, Lisa (Kerry Washington), moving into their new house: their first house, a perfect house in a perfect LA suburb, high in the hills. They are happy. They are in love. They kiss a lot and repeatedly say ‘love you, honey’ in the way film couples do when they are about to get walloped. There, that’ll take the smiles off your faces. Meanwhile, next door, we see Abel, a widower, having breakfast with his two young kids and sending his son to change his shirt. ‘Why?’ asks the daughter. ‘What’s the rule?’ asks Abel. ‘I don’t know, you got so many,’ she says. ‘Have so many,' he corrects. ‘Have so many.’ So we know he runs a tight, authoritarian, illiberal ship, is in command of his home just as, come to think of it, Jackson is in absolute command of this film. In fact, Jackson is this film, powering it along with his own, particular, muscular presence and that thing he can do; that thing where he can go from innocently playful to downright wicked on the turn of a sixpence and still be utterly and brilliantly believable.

Directed by Neil LaBute, the first hour of Lakeview Terrace is wonderfully effective; tense, disturbing, always knocking you off balance as hostilities escalate, as Abel’s small acts of harassment — issuing faux parking tickets, turning his house searchlights to shine directly into Chris and Lisa’s bedroom — grow into full-on acts of intimidating vandalism which the Mattsons know to be Abel’s work, but would they ever be able to prove it? Hell, no. Although the film tries to be other things, particularly in the way Abel’s sly intrusions force the couple to discuss race properly for what appears to be the first time, it works best as a thriller; works best when you're waiting to see what Abel is going to do next and how Chris and Lisa are going to respond. A good tip? Do brace yourself for their housewarming party. I’d even have a snifter first, if I were you.

So, all well and good, but? Alas, LaBute loses it entirely in the third and final act, when he yields entirely to genre convention and allows it all to explode into a shoot-out of the utmost silliness. A pity, for an otherwise intelligent film to end so unintelligently, but there you have it and if you are happy to see a film that's two thirds edge-of-yourseat and one third ‘oh, for heaven’s sake’, then you may very well be happy with this.

Now, on to Summer, one of those small films I shouldn’t really bother with here, as it’s probably only showing at an independent cinema nowhere near you until the end of last week, but it’s good, so I will. Summer, a British film shot in Bolsover — not the film capital of the world, in case you were wondering — focuses on the relationship between two friends: Darren (Steve Evets) who is wheelchair bound and dying, and Shaun, who looks after him while eking out a living working nights in a petrol station. Shaun is played by Robert Carlyle, that master of the outsider, and also a powerful screen presence despite being so skinny and having very lank hair. (If he ever came to stay with me, I would feed him up and introduce him to Charles Worthington’s volumising shampoo, which works wonders.) How they came to be where they are is told in flashbacks, particularly those relating to a summer 20 years earlier when, as two troubled tearaways whom no one ever took any trouble with, they would hang out down by a lake with Shaun's first love, Katy (Rachael Blake). There is probably nothing new in Summer, being quite Ken Loach-ian in feel, and being about people who could have got somewhere if others had believed in them, but as an essay on wasted lives and wasted love, it is honest, powerful and authentic. In fact, I don't know who I love best, Robert or Samuel. Perhaps, if it came to it, I could shampoo one who could then tell the other how lovely I am, how I’ve never even had a slave or anything. It could be quite fun. ❑