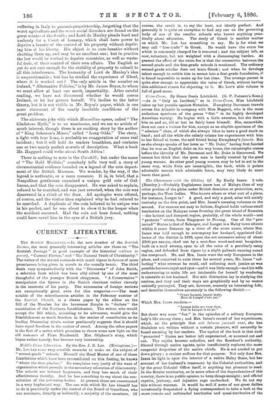 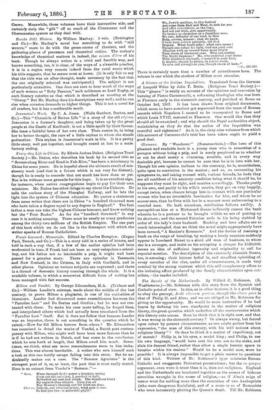 The Chersonese with the Gilding Off. By Emily lanes. 2

vols. (Bentley.)—Probably Englishmen know less of Malaya than of any other portion of the globe under British dominion or protection, save, perhaps, the West Indies. Who knows where or what sort of a place, for instance, Langat is ? A good, and only a good, atlas will satisfy curiosity on the first point, and Mrs. Innes's amusing volumes on the second. For reasons not easy to fathom, England holds various small territories on the Malayan coast fronting the great island of Sumatra —the hottest and dampest region, probably, of the whole world—and " protects " others, from Singapore to Penang. One of the " pro- tected " States is that of Selangor, and Langat is a Malay town situate within it some distance up a river of the same name, where Mrs. Lines was bold enough to accompany her husband, appointed Col- lector of the district in 1876, upon tho not excessive salary of about 2500 per annum, eked out by a rent-free wood-and-mat bungalow, built on a mud swamp, open to all the rains of a peculiarly rainy region, and defended from tigers by a slight palisade rennin round the compound. Mr. and Mrs. lanes were the only Europeans in the place, and contrived to exist there for several years, Mr. Innes " col- lecting " what revenue he could, and enforcing such justice as was possible between rajah and ryot—and it was little enough—and his wife endeavoaring to make life not intolerable for herself by rendering it tolerable to her husband. Her sole distraction lay in studying the natives, and they and their ways are graphically and by no means unkindly portrayed. They are, however, scarcely an interesting folk, and describe themselves accurately in the following distich :— " Orane Langat, jangat Main di Langat t'ada jai."

Which Mrs. lanes renders,— " Lanot folks are very slow, Fan in Langat is no go."

But there was some " fun " in the episodes of a solitary European lady's life among them ; and Mrs. Innes's record of her experiences, which, on the principle that acti labores jucundi aunt, she has doubtless not written without a certain pleasure, will assuredly be found amusing by her readers. The upshot of the book is that each "protected" States are better left unprotected, or annexed out and out. The rajahs become nobodies, and the Resident's authority, filtered through native agents, quite insufficiently replaces the more congenial despotism of the native chiefs. He is not needed to put down piracy ; a cruiser suffices for that purpose. Not only does Mrs. hoes let light in upon the interior of a native Malay State, bat her account of her husband's treatment by the Colonial authorities, and by the great Colonial Office itself, is anything but pleasant to read. In the Straits territories, as in some other of the dependencies of this country, there is no public opinion to keep things straight; and official caprice, jealousy, and injustice rage unchecked. We do not say this without warrant. It would be well if some of our great dailies occasionally despatched a flying correspondent to take a look at the more remote and nnfriended territories and quasi-territories of the

Crown. Meanwhile, these volames have their instructive side, and certainly strip the " gilt " off so much of the Chersonese and the Chersonesian system as they deal with.