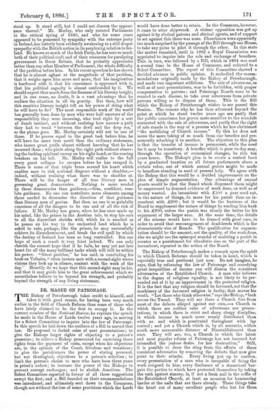 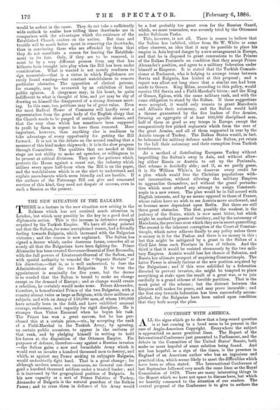 THE Bishop of Peterborough takes credit to himself, and takes it with good reason, for having been very much earlier in the field of Church Reform than some of those who have lately claimed to be the first to occupy it. In the current number of the National Review, he reprints the speech he made in the House of Lords twelve years ago, in moving for a Select Committee to inquire into the law of Patronage. In this speech he laid down the outlines of a Bill to amend that law. He proposed to forbid sales of neat presentations ; to give the Bishops larger rights of objecting to a patron's presentee; to relieve a Bishop prosecuted for exercising these rights from the payment of costs, except when his objections are, in the opinion of the Court, frivolous and vexatious; to give the parishioners the power of stating personal, but not theological, objections to a patron's selection ; to limit the patron's choice to men who have been three years in priest's orders ; to increase the power of the Bishops to prevent corrupt exchanges ; and to abolish donatives. The Select Committee reported in favour of all these suggestions except the first, and a Bill founded on their recommendations was inirod.need, and ultimately sent down to the Commons, though not without the loss of some provisions which the Lords would have done better to retain. In the Commons, however, it came to utter shipwreck. A violent opposition was gdt up against it by clerical patrons and clerical agents, and of support to set against this there was none. Churchmen were apparently too much surprised by the passage of the Bill through one House, to take any pains to pilot it through the other. In this state the matter remained, until in 1882 a Royal Commission was appointed to inquire into the sale and exchange of benefices. This, in turn, was followed by a Bill, which in 1884 was read a second time in the House of Commons, and referred to a Select Committee. The report of this Committee showed a decided advance in public opinion. It embodied the recom- mendations originally made by the Bishop of Peterborougb, and made two important additions. The sale of advowsons, as well as of neat presentations, was to be forbidden, with proper compensation to patrons ; and Patronage Boards were to be created in each diocese, to take over advowsons from private patrons willing so to dispose of them. This is the Bill which the Bishop of Peterborough wishes to see passed this Session. The reasons why he has thus advanced beyond the point at which he stood twelve years ago are partly that the public conscience has grown more sensitive to the scanddls connected with the sale of advowsons, and partly that the right of sale stands in the way of a process which he has christened "the mobilising of Church income." By this he does not mean the mere taking of so much from one benefice and per- manently attaching it to another. The objection to this plan is that the transfer of income is permanent, while the need for it may be transitory. A benefice which is poor to-day may, through the operation of economical changes, be rich ten years hence. The Bishop's plan is to create a central fund by a graduated taxation on all future preferments above a certain value, out of which annual grants might be made to benefices standing in need of present help. We agree with the Bishop that this would be a decided improvement on the plan of simple augmentation. One advantage of annual grants would be that the Board which dispensed them might be empowered to demand evidence of work done, as well as of money wanted. An incumbent with £500 a year need not, in the nature of things, do more for his parish than an in- cumbent with £200; but it would be the business of the Board to supplement the nature of things by sending him back to his £200, unless the parish was clearly the better for his enjoyment of the larger sum. At the same time, the details of the scheme would have to be framed with great care, in order to avoid that encouragement of dead-levels which is the characteristic vice of Boards. The qualification for augmen- tation should be the amount, not the quality, of the work done, else we might see the episcopal scandal of mulcting a parish in curates as a punishment for ritualistic sins on the part of the incumbent, repeated in the action of the Board.

The Bishop of Peterborough makes a remark upon the spirit in which Church Reforms should be taken in hand, which is especially true and pertinent just now. Do not imagine, he says, that by reforming the law of Patronage and remedying great inequalities of income you will disarm the consistent adversaries of the Established Church. A man who believes in the dogma of religious equality, is not likely to be per- suaded out of it by an improvement in the protected religion. It is the fact that any religion should be favoured, not that the machinery of the favoured religion is faulty, that moves his wrath. "Let those who think otherwise," says the 'Bishop. "look across the Tweed. They will see there a Church free from most of the defects alleged against our own,—a Church in which there are neither sales of advowsons nor presen- tations, in which there is strict and sharp Clergy discipline, in which income is much more evenly distributed than with us, and which is penetrated throughout with lay control ; and yet a Church which is, by all accounts, within much more measurable distance of Disestablishment than ours. They will see, too, a Church in which the latest and moat popular reform of Patronage has not lessened but intensified the jealous desire for her destruction." Still, it is possible to draw the sting from the efforts of these consistent adversaries by removing the defects that now give point to their attacks. Every living put up to auction, every presentation of a man who is incapable of doing the work assigned to him, every disclosure of a simoniacal bar- gain the parties to which have protected themselves by taking the oath against simony, is, if not a fresh nail in the coffin of the Established March, at least an occasion for hammering harder at the nails that are there already. These things lake the heart out of many excellent people who but for them would be ardent in the cause. They do not take a sufficiently wide outlook to realise how trifling these drawbacks are in comparison with the advantages which the existence of the Established Church confers on the nation. But time and trouble will be much better spent in removing the drawbacks, than in convincing those who are offended by them that they do not constitute a reason for leaving the Establish- ment to its fate. Only, if they are to be removed, it must be by a very different process from any that has hitherto been brought into play when the Bill has been under consideration. What is wanted is not merely readiness to sign memorials—that is a virtue in which Englishmen are rarely found wanting—but constant watchfulness to remove particular obstacles. The opposition of clerical patrons, for example, may be overawed by an exhibition of local public opinion. A clergyman may, in his heart, be quite indifferent to what is thought of him, and yet may be shy of drawing on himself the disapproval of a strong diocesan meet- ing. In this case, too, petitions may be of great value. Even the most Radical House of Commons will hardly resist a representation from the great body of the English clergy that the Church needs to be purged of certain specific abuses, and that the very class which has sometimes been supposed to profit by them is urgent to have them removed. More important, however, than anything else is readiness to take advantage of every opportunity for getting the Bill forward. It is not in the debate on the second reading that a measure of this kind makes shipwreck ; it is in the slow progress through Committee. The qualities that are needed at this stage are not ability to make set speeches, or willingness to be present at critical divisions. They are the patience which protects the House against a count out, the industry which utilises every spare half-hour when the Bill is on the paper, and the watchfulness which is on the alert to understand and explain amendments which seem friendly and are hostile. If the authors of the Patronage Bill can give and command services of this kind, they need not despair of success, even in such a Session as the present.