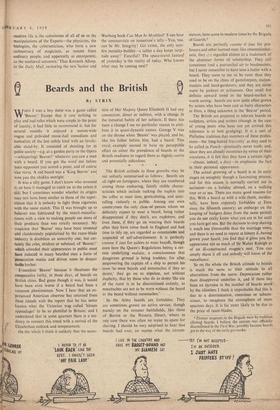 Beards and the British

By STRIA WHEN I was a boy there was a game called 'Beaver.' Except that it cost nothing to play and had rules which were simple to the point of inanity, it had little to recommend it; but for several months it enjoyed a nation-wide vogue and prdvided music-hall comedians and humorists of the less subtle kind with an invalu- able stand-by. It consisted of shouting (or in polite society—e.g. at a garden party or the Opera —whispering) 'Beaver!' whenever you saw a man with a beard. If you got the word out before your opponent you scored a point, and of course vice versa. A red beard was a 'King Beaver' and won you the chukka outright.

It was a silly game. I don't know who invented it, or how it managed to catch on to the extent it did; but I sometimes wonder whether its origins may not have been similar to those of the super- stition that it is unlucky to light three cigarettes with the same match. This (I was brought up to believe) was fabricated by the match-manufac- turers with a view to making people use more of their products than was strictly necessary. My suspicion that 'Beaver' may have been invented and clandestinely popularised by the razor-blade industry is doubtless an unworthy one; but cer- tainly the cries, strident or subdued, of 'Beaver!' which attended their appearances in public must have induced in many bearded men a form of persecution mania and driven some in despair to the barber.

I mention 'Beaver' because it illustrates the comparative rarity, in those days, of beards on British chins. Bad game though it was, it would have been even worse if a beard had been a common phenomenon. Now I hear that an ex- perienced American observer has returned from these islands with the report that he has never known what the Victorian wag called 'hirsute appendages' to be so plentiful in Britain; and 1 understand that in some quarters there is a ten- dency to connect this trend with a revival of the Elizabethan outlook and temperament.

On the whole I think it unlikely that the acces- sion of Her Majesty Queen Elizabeth 11 had any connection, direct or indirect, with a change in the tonsorial habits of her subjects. If there has been a change I see no particular reason to attri- bute it to quasi-dynastic causes. George V was on the throne when 'Beaver' was played, and he, like his father before him, had a beard. This royal example seemed to have no perceptible effect on either the prevalence of beards or the British readiness to regard them as slightly outres and potentially ridiculous.

The British attitude to these growths may be not unfairly summarised as follows: Beards are all right on foreigners, where they are numbered among those endearing, faintly risible charac- teristics which include tucking the napkin into the collar at meal time, gesticulating, and quar- relling violently in public. Among our own countrymen the only class of person whom we definitely expect to wear a beard, being rather disappointed if they don't, are explotrers; and even these, if they go on wearing their beards after they have come back to England and had time to tidy up, are regarded as ostentatious and suspected of self-advertisement. It is perfectly eomnie it Taut for sailors to wear beara, though even here the Queen's Regulations betray a cer- tain underlying malaise, a consciousness that dangerous ground is being trodden; for after empowering the captain of a ship to permit his' crew `to wear beards and moustaches if they so desire,' they go on to stipulate, not without duplicity, that by those who do so desire 'the use of the razor is to be discontinued entirely, as moustaches are not to be worn without the beard or the beard without moustaches.'

In the Army beards are forbidden. They are sometimes grown on active service, though mainly on the remoter battlefields, like those of Burma or the Western Desert, where in any case there was often no water to spare for shaving. I should be very surprised to hear that beards had ever, no matter what the circum- stances, been worn in modern times by the Brigade of Guards.* Beards are perfectly comme ii faux for pro- fessors and other learned men; like absentminded- ness, they regarded almost as a trademark of the abstruser forms of scholarship. They still sometimes lend a patriarchal air to headmasters, but I never remember to have seen a butler with a beard. They seem to me to be rarer than they used to be on the chins of gamekeepers, station- masters and head-gardeners, and they are never worn by jockeys or policemen. One small but definite upward trend in the beard-market is worth noting: beards are now quite often grown by actors who have been cast as hairy characters in films, a thing unknown in the 'Beaver' period.

The British are prepared to tolerate beards on sculptors, artists and writers (though in the case of young poets who have not yet arrived this tolerance is at best grudging). It is a sort of Philistine tradition that members of these profes- sions—the 'long-haired fraternity' as they used to be called in Punch—practically never wash; and, since they are already eccentrics by virtue of their vocations, it is felt that they have a certain right —almost, indeed, a duty—to emphasise the fact in their personal appearance.

The actual growing of a beard is in its early stages an unsightly though a fascinating process, and for this reason is normally carried out in seclusion—on a holiday abroad, on a walking tour or at sea. There are many good reasons for this. With a beard as with a wife (both, inciden- tally, have been expressly forbidden at Eton since the fifteenth century; an embargo on the keeping of badgers dates from the same period) you do not really know what you are in for until you have got one. But the decision to stop shaving is much less irrevocable than the marriage vows, and there is no need to repent at leisure if, having grown your beard, you find that it gives you the appearance not so much of Sir Walter Raleigh as of an ill-constructed magpie's nest. You can simply shave it off and nobody will know of the me call So on the whole the British attitude to beards is much the same as their attitude to all aberrations from the norm. Deprecation rather than disapproval underlies it, and if there hss been an increase in the number of beards wont by the islanders I think it improbable that this is due to a determination, conscious or subcon- scious, to recapture the atmosphere of more spacious days. It is far more likely to be due to the price of razor-blades.

"Pioneer sergeants in the Brigade were by tradition alloweq beards. I believe the custom was officially discontinued in the First War, possibly because beards got in the way of the early gas masks.