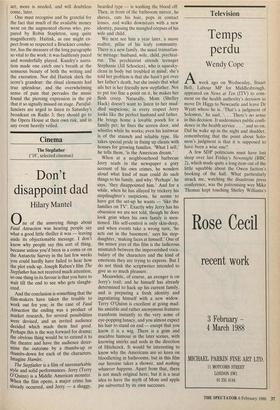 ne of the annoying things about Fatal Attraction was hearing people say what a good little thriller it was — leaving aside its objectionable message. I don't know why people say this sort of thing, because unless you'd been in a coma or on the Antarctic Survey in the last few weeks you could hardly have failed to hear how the plot ends up. Joseph Ruben's film The Stepfather has not received much attention, so one thing in its favour is that you have to wait till the end to see who gets slaught- ered.

And the conclusion is something that the film-makers have taken the trouble to work out for you; in the case of Fatal Attraction the ending was a product of market research, for several possibilities were devised, and an invited audience decided which made them feel good. Perhaps this is the way forward for drama; the obvious thing would be to extend it to the theatre and have the audience deter- Mine the outcome by a thumbs-up or thumbs-down for each of the characters. Imagine Hamlet.

The Stepfather is a film of unremarkable style and solid performances. Jerry (Terry O'Quinn) is a Middle American monster. When the film opens, a major crime has already occurred, and Jerry — a shaggy, bearded type — is washing the blood off. Then, in front of the bathroom mirror, he shaves, cuts his hair, pops in contact lenses, and walks downstairs with a new identity, passing the mangled corpses of his wife and child.

We next see him a year later, a suave realtor, pillar of his leafy community. There is a new family, the usual transatlan- tic menage: husband, wife, child, psychiat- rist. The psychiatrist attends teenager Stephanie (Jill Schoelen), who is squeaky- clean in body but troubled in mind; she's told her problem is that she hasn't got over her father's death, but she insists that what ails her is her friendly new stepfather. Not to put too fine a point on it, he makes her flesh creep. Naturally, Mom (Shelley Hack) doesn't want to listen to her mud- dled suspicions; in every respect Jerry looks like the perfect husband and father. He brings home a lovable pooch for a family pet; he fixes the screen door, and whistles while he works; even his knitwear is of the staunch and reliable type. He takes special pride in fixing tip clients with houses for growing families. 'What 1 sell,' he tells them, 'is the American dream.'

When at a neighbourhood barbecue Jerry reads in the newspaper a gory account of his own crimes, he wonders aloud what kind of man could do such things to his family, and why: 'Perhaps', he says, 'they disappointed him.' And for a while, when he has allayed by trickery his stepdaughter's suspicions, he seems to have got the set-up he wants — 'like the families on TV'. Exactly why Jerry has his obsession we are not told, though he does look grim when his own family is men- tioned. His self-control is only skin-deep, and when events take a wrong turn, 'he acts out in the basement,' says his step- daughter, 'making faces at himself.' One of the minor joys of this film is the ludicrous mismatch between the impoverished voca- bulary of the characters and the kind of emotions they are trying to express. But I do not think the scriptwriter intended to give us so much pleasure.

Meanwhile, of course, an avenger is on Jerry's trail; and he himself has already determined to hack up his current family, and is preparing a fresh identity and ingratiating himself with a new widow. Terry O'Quinn is excellent at going mad: his amiable and rather anonymous features transform instantly to the very acme of eye-popping lunacy, and you almost expect his hair to stand on end — except that you know it is a wig. There is a grim and macabre humour in the later scenes, with knowing smirks and nods in the direction of Hitchcock. It would be interesting to know why the Americans are so keen on bloodletting in bathrooms; but in this film our heroine takes a shower, and nothing whatever happens. Apart from that, there is not much original here; but it is a neat idea to have the myth of Mom and apple pie subverted by its own successes.