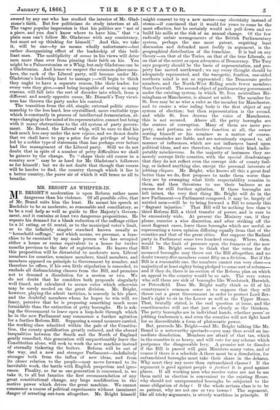 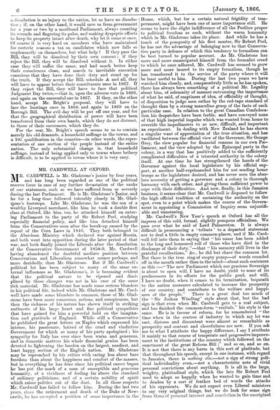 MR. BRIGHT'S moderation is upon Reform rather more dangerous than his violence. Of all possible roles, that of Mr. Brand suits him the least. He meant his speech at Rochdale to be so moderate, so reasonable and conciliatory, as to be a real help as well as guide to Her Majesty's Govern- ment, and it contains at least two dangerous propositions. He repeats his demand for a blank reduction of the suffrage either to a 51. rating, or 61. rental, or to the municipal voter's limit, or to the infinitely simpler standard known usually as " household suffrage," and which means, we presume, a fran- chise to be exercised by any male person who has occupied either a house or rooms equivalent to a house for twelve months previous to the date of registration. He knows that this proposition will be distasteful to moderate men, Liberal members for counties, nominee members, timid members, and members opposed on principle to Government by number, and therefore he offers, if his own little stipulation is conceded, to exclude all disfranchising clauses from the Bill, and promises not to demand a dissolution for a session or two. We do not doubt that he considers both proposals singularly well timed, and calculated to secure votes which otherwise may be sorely needed on the great division. Mr. Bright, however, playing the adroit tactician, is scarcely in his place, and the doubtful members whom he hopes to win will, we fancy, perceive that he is proposing something much more "formidable than the extinction of petty boroughs. He is ask- ing the Government to leave open a loop-hole through which he in the new Parliament may commence a further agitation for a further Reform Bill. Supposing a sound measure carried, the working class admitted within the pale of the Constitu- tion, the county qualification greatly reduced, and the absurd inequalities between the South and the North of England _gently remedied, this generation will unquestionably leave the Constitution alone, will seek to work the new machine instead of eternally tinkering the boilers. Reform will be out of the way, and a new and stronger Parliament—indefinitely stronger both from the influx of new ideas, and from its closer relation to the people—may move forward to its inevitable work, the battle with English pauperism and igno- rance. Finality, so far as one generation is concerned, is, we take it, to all but fanatics the first recommendation of any great constitutional change, any large modification in the motive power which drives the great machine. We cannot commence a course of political experiments without imminent danger of arresting out-turn altogether. Mr. Bright himself

might consent to try a new motor—say electricity instead of steam—if convinced that it would for years to come be the most effective, but he certainly would not pull down and re- build his mills at the risk of an annual change. Of the few radically unfair arrangements of the British Parliamentary system, perhaps the one most patent, requiring least discussion and defended most feebly in argument, is the geographical distribution of the franchise. It is bad on any theory—on that of the Tories, on that of the true Liberals, or on that of the secret or open advocates of Democracy. The Tory says property should be the basis of representation, and pro- perty has moved northward ; we say every thought should be adequately represented, and the energetic, fearless, one-sided northern mind is not so represented ; the Democrats prefer numbers, and the North-West Riding sends fewer members than Cornwall. The second object of parliamentary government under the existing system, in which St. Ives neutralizes Bir- mingham or Manchester, is almost set aside. The member for St. Ives may be as wise a ruler as the member for Manchester, and to create a wise ruling body is the first object of any system of election; but then representation is the second, and while St. Ives drowns the voice of Manchester, this is not secured. Above all, the petty boroughs are the centres of corruption. Many of them are mere pro- perty, and perform no elective function at all, the owner seating himself or his nominee as a matter of course. The remainder are liable, and are notoriously exposed to, all manner of influences, which are not influences based upon political ideas, and are therefore, whatever their kind, indis- putably mischievous. In the majority of instances they are merely corrupt little counties, with the special disadvantage that they do not reflect even the corrupt side of county feel- ing, or indeed anything else, except the personal interests of jobbing cliques. Mr. Bright, who knows all this a great deal better than we do, first proposes to make them worse than they are by swamping what little respectability remains in them, and then threatens to use their badness as an excuse for still further agitation. If these boroughs are left intact, the very first thing Mr. Bright will do in the new Parliament—a Parliament composed, it may be, largely of untried men—will be to bring forward a Bill to remedy this " flagrant injustice." That Bill will be nothing less than% third Reform Bill, a third transfer of power, and is sure to be excessively wide. At present the Ministry can, if they please, exercise a wise discretion, and after striking off the most flagrant cases, leave those boroughs which are useful, as representing a town opinion differing equally from that of the counties and that of the great cities. But suppose the Radical party in Parliament some two hundred strong. Where, then, would be the limit of pressure upon the framers of the new Bill ? Mr. Bright seems to think that the votes for the menaced boroughs may throw out the Bill altogether, and no doubt twenty-five members count fifty on a division. But if the Bill is a reasonable one, the numbers cannot run very close—a majority of at least eighty being pledged to some sort of reform— and if they do, there is no section of the Reform plan on which an appeal to the country would be so safe. The very voters who sell them are sick of boroughs like Woodstock, Harwich, or Petersfield. Does Mr. Bright really think so ill of his countrymen's common sense as to suppose that they will throw out a great Government in order to protect Lord Zet- land's right to sit in the Lower as well as the Upper House. That, brutally stated, is the real question at issue, and the constituencies will see that just as clearly as the thinkers. The petty boroughs are in individual hands, whether peers' or jobbing tradesmen's, and even the counties will not fight hard for so discreditable a form of plutocratic power.

But, proceeds Mr. Bright—and Mr. Bright talking like Mr. Brand is a noteworthy spectacle—you may thus avoid an im- mediate dissolution. Members are afraid of that tax, which in the counties is so heavy, and will vote for any scheme which postpones the disagreeable levy. A promise not to dissolve if the Bill is passed will gain Ministers many votes, and of course if there is a schedule A there must be a dissolution, for enfranchised boroughs must take their share in the debates. Why must.they any more than enfranchised classes ? If the argument is good against people a fortiori it is good against places. If all working men who receive votes are not to use them until an election is convenient to the existing House, why should not unrepresented boroughs be subjected to the same obligation of delay ? If the whole artizan class is to be so patient, why are not one or two towns ? The argument, like all tricky arguments, is utterly worthless in principle. If a dissolution is an injury to the nation, let us have no dissolu- tion ; if, on the other hand, it would save us from government for a year or two by a moribund Parliament, always counting its wounds and fingering its pulse, and making dyspeptic efforts to keep its property intact after death, why let it come at once. Of course it is very hard on members who have maintained for esoteric reasons a tax on candidates which now falls so unpleasantly on themselves, but what help ? If they pass the Bill, they will be dissolved by their own consent ; if they reject the Bill, they will be dissolved without it. In either case they will suffer the same, and had much better keep their consciences clean, and march to inevitable execution conscious that they have done their duty and stood up for the truth. If they accept the Bill, schedule A and all, they will have to appear before their constituents once in 1867. If they reject the Bill, they will have to face that political Judgment Day twice,—that is, upon the adverse vote in 1866, and again on the successful one in 1867. If they, on the other hand, accept Mr. Bright's proposal, they will have to face the hustings once in 1868, and again in 1869 on the Borough Bill. The evil day will be put off one year, and for that the geographical distribution of power will have been transferred from their own hands, which they do not distrust, to those of their successors, which they do.

For the rest, Mr. Bright's speech seems to us to contain merely his old demands, a household suffrage in the towns, and a 101. qualification in •the counties—in other words, the repre- sentation of one section of the people instead of the entire nation. The only substantial change is, that household suffrage, instead of being applied only to towns where bribery is difficult, is to be applied to towns where it is very easy.