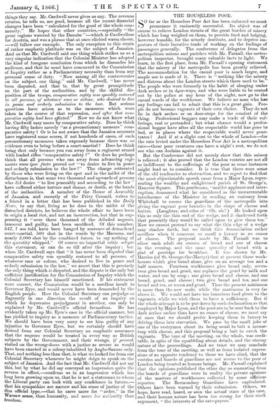 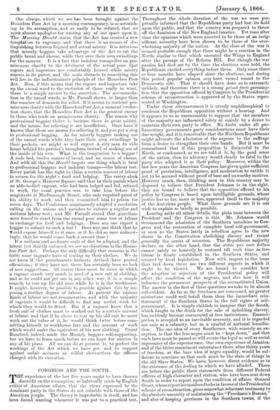 SO far as the Houseless Poor Act has been enforced we must pronounce it eminently successful. Its object was of course to relieve London 'streets of the great burden of misery which has long weighed on them, to provide food and lodging, however humble, for the utterly destitute, and to deprive im- postors of their lucrative trade of working on the feelings of passengers generally. The conference of delegates from the metropolitan unions and parishes with Mr. Farnall, the metro- politan inspector, brought many valuable facts to light. We learn, in the first place, from Mr. Farnall's opening statement that the misery of the metropolis has been greatly relieved. The accommodation for the casual poor is much larger, and ample use is made of it. There is nothing like the misery and distress about the London streets which there used to be." The people who were formerly in the habit of sleeping under dark arches or in deor-ways, and who were liable to be routed out by the police at any hour of the night, now go to the casual wards of the workhouse. We believe no man who has any feelings can fail to admit that this is a great gain. Peo- ple do not become vagrants of their own choice. They do not lie in dark arches or on door-steps for the comfort of the thing. Professional beggars may make a trade of their suf- ferings, real or pretended ; but what chance would a profes- sional beggar have after all the respectable world has gone to bed, or in places where the respectable world never pene- trates ? And if at a slight cost to the whole of London--for the rate levied under the Houseless Poor Act is a metropolitan rate—these poor creatures can have a night's rest, we do not see who can declaim against it.

But the Conference did not merely show that this misery is relieved ; it also proved that the London vestries are not all as indifferent to the sufferings of the poor as some instances might lead us to consider. It is true that there were some of the old tendencies to obstruction, and we regret to find that the most objectionable speech came from a Major Lyon, repre- senting the wealthy and enlightened parish of St. George's, Hanover Square. This gentleman, "amidst applause and inter- ruption, denounced what he considered as the unwarrantable interference of the Minister in sending an emissary from Whitehall to coerce the guardians of the metropolis into giving the vagrant poor luxuries in the shape of cheese and, butter. (Laughter, and cries of Oh, oh !') He looked upon this as only the thin end of the wedge, and it shadowed forth that presently they would be called upon to give them tea." Now we cannot pretend to say what the thin edge of a wedge may shadow forth, but we think this denunciation rather needless when it concerns so small a luxury as an ounce of cheese. The proposal made by Mr. Farnall was to allow each adult six ounces of bread and one of cheese in the evening, and the same quantity of bread with a pint of porridge for breakfast. It was shown by Mr. Harries (of St. George-the-Martyr) that at present those work- houses which give bread alone, give on an average ten and a half ounces. Fourteen workhouses give bread only, seven- teen give bread and gruel, one replaces the gruel by milk and water, and one by soup ; one gives bread and cheese, and one bread, gruel, and cheese ; two give bread and tea, and one bread and tea, or cocoa and gruel. Thus the present minimum is more than the new scale, while the maximum is very far above it. We would not have too luxurious food given to the vagrants, while we wish them to have a sufficiency. But if the whole attempt is to be put down by such declamation as that employed by Major Lyon, and the poor are to be sent back to the dark arches rather than have an ounce of cheese, we must say at once that we should prefer keeping them in luxury to driving them into starvation. We pass by the small joke of one of the vestrymen about its being usual to bait a mouse- trap with cheese, and this proposal being a bait to catch the vagrants. The tone of the meeting, on the whole, was credi- table, in spite of the squabbling about details, and the stormy nature of the proceedings. And we trust we may conclude from the tone of the meeting, as well as from isolated expres- sions of an opposite tendency to those we have cited, that the vestries and boards of guardians are not averse to the poor of London being treated as human beings. Mr. Farnall explained

that the opinions published the other day as emanating from the boards of guardians were in reality the private opinions of the masters of workhouses collected by some officious reporter. The Bermondsey Guardians have capitulated. Others have been warned by their submission. Others, we hope, have read, heard, or seen the actual state of the case, and their human nature has been too strong for their stock argument, " the interests of the rate-payers." One charge, which we see has been brought against the Houseless Poor Act by a morning contemporary, is so astonish- ing in its assumption, and so easily to be refuted, that we must almost apologize for wasting any of our space upon it. The Morning Herald states that the Act has created a new temptation to vagrancy, and that there is no means of dis- tinguishing between feigned and actual misery. It is notorious that miserly beggars take advantage of the Act to eat the public bread and cheese, while they save their own swindlings for the morrow. It is a fact that indolent tramps live on pro- miscuous charity to the detriment of the actual poor, that rogues and impostors are comfortably housed while misery starves in its garret, and the main obstacle to remedying this evil lies in the indiscriminate principle of the Houseless Poor Act. Now, if this means that the rogues and impostors take up the casual ward to the exclusion of those really in want, there is a simple answer to the assertion.. The accommoda- tion in the casual wards, as Mr. Farnall shows, is larger than the number of demands for relief. If it means to contrast pro- miscuous charity with the Houseless Poor Act, a moment's reflec- tion shows that the Housoless Poor Act is the greatest enemy to those who trade on promiscuous charity. The reason why professional beggars thrive is because there is great misery, and the means for relieving it are insufficient. Once have it known that there are means for relieving it, and you put a stop to professional begging. As for miserly beggars making use of the casual wards while they have their own swindlings in their pockets, we might as well expect a city man to ride home behind his partner's brougham instead of making use of the inside of his own. What is the temptation to a beggar ? A rude bed, twelve ounces of bread, and an ounce of cheese. And with all this the Herald forgets one thing which is fatal to professional beggars and indolent tramps—the labour test. Every parish has the right to claim a certain amount of labour in return for the night's food and lodging. The vestry clerk of St. George's, Hanover Square, said that in their parish when an able-bodied vagrant, who had been lodged and fed, refused to work, the usual practice was to take him before the magistrate at Marlborough Street, who only required proof of his ability to work, and then committed him to prison for seven days. The Conference unanimously adopted a resolution calling on the unions and parishes to enforce a regular and uniform labour test ; and Mr. Farnall stated that guardians were bound to exact from the casual poor some test of labour in exchange for food and lodgings. Does any one expect a beggar to submit to such a test ? Does any,pne think that he Would expose himself to it once, or if he did so once unknow- ingly, that he would come back a second time ?

If a uniform and moderate scale of diet be adopted, and the labour test strictly enforced, we see no objections to the House- less Poor Act. Perhaps the only difficulty that remains is the habit some vagrants have of tearing up their clothes. We do not know if the punishments hitherto devised have proved efficacious ; if they have not, there has certainly been no lack of new suggestions. Of course there must be cases in which a vagrant stands very much in need of a new suit of clothing, and as he could not get one in any other way, it is a simple remedy to tear up his old ones while he is in the workhouse. It might, however, be possible to provide against this by im- posing a further degree of labour. At present the various kinds of labour are not remunerative, and with the majority of vagrants it would be difficult to find any useful work for which they would be fitted. But if a vagrant knew that a fresh suit of clothes must be worked out by a certain amount of labour, and that if he chose to tear up his old suit he must work out the value of it, he would think twice before com- mitting himself to workhouse fare and the amount of work which would make the equivalent of his new clothing. Count Rumford, indeed, made the Munich beggars self-supporting, but we have to learn much before we can hope for success in any of his plans. All we can do at present is, to perfect the workings of the Act which we have got, and to support against unfair accusers or wilful obstructives the officers charged with its execution.