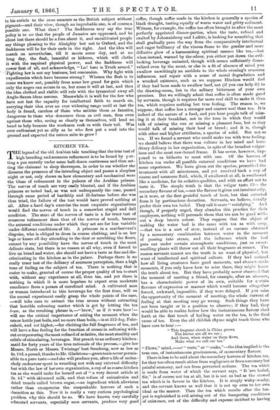 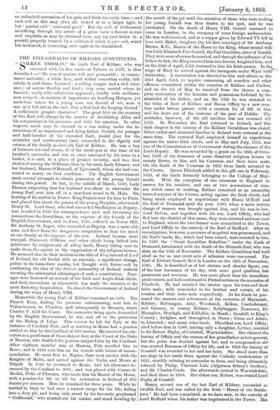 HE legend of the old Arabian tale teaching that the true testof 1 high breeding and sensuous refinement into be found by put- ting a pea secretly under some half-dozen mattresses and then set- ting the claimant to sleep thereupon, in order to see whether she discerns the presence of the intruding object and passes a sleepless night or not, only shows us how elementary and mechanical were the ideas of refinement in the palaces of the Arabian princes. The nerves of touch are very easily blunted, and if the Arabian princess so tested had, as was not unfrequently the case, passed through some period of hardship and ill-fortune before she was thus tried, the failure of the test would have proved nothing at all. After a hard day's exercise the most exquisite organizations would find the nerves of touch in a somewhat stupid and dull condition. The state of the nerves, of taste is a far truer test of sensuous refinement than that of the nerves of touch, because the external conditions under which they act are far less variable under different conditions of life. A princess in a maidservant's disguise, who is obliged to dress in coarse clothing, and is on her legs or knees all day attending to the door or scrubbing the floors, cannot by any possibility have the nerves of touch in the most delicate state, but there is no reason at all why, even if forced to live op. bread and water, she should not have a taste as fine and dis- criminating in the kitchen as in the palace. Perhaps there is no really truer test of the delicacy of sensuous perception, than a high tone of feeling on the subject of tea. There is nothing that is easier to make, granted of course the proper quality of tea to start with, without any experience at all, than tea, and yet there is nothing in which it is more hopeless to expect even moderate excellence from a person of unrefined mind. A cultivated man or woman introduced to this beverage for the first time, will on the second experiment easily grasp the whole points of the case, —will take care to extract the true aroma without extracting that horrible colouring matter which is got by letting the tea brew, as the revolting phrase is, —" brew," as if it were beer!— will see the critical importance of seizing the moment when the urnor kettle just boils, and no more than boils,—is at 212 deg. Fahr- enheit, and not higher,—for eliciting the full fragrance of tea, and will have a fine feeling for the function of cream in softening with- out overpowering the most refined of sedative, the most stealthy and subtle of stimulating, beverages. But preach to an ordinary kitchen- maid for forty years of the true rationale of the process,—give her Messrs. North or Messrs. Twinings' best Souchong, now as low as 4a. 10d. a pound, thanks to Mr. Gladstone—green teais never permis- sible to a pure taste—and she will produce you, after a life of melan- choly endeavour spent in wrestling not with any external difficulty but with the law of her own organization, a cup of as coarse kitchen tea as she would make for herself out of " a very decent article at 2s. 4d." with skimmed milk, and that refuse of animalcules and dried treacle called brown sugar,—an ingredient which alleviates rather than exasperates the unspeakable horrors of such a -decoction as this. Now it is really a very curious psychological problem why this should be so. We have known very carefully educated servants, especially men servants, produce very good

coffee, though coffee made in the kitchen is generally a species of black draught, tasting equally of warm water and gritty sediment.

Witness, for example, the coffee too often brought in after the most perfectly appointed dinner-parties, when the taste, refined and exalted by Johannisberg and Lafitte, is looking for something that shall gradually pave the way from the comparatively intellectual and eager brilliancy of the vinous flame to the gentler and more diffusive glow of a harmonizing spiritual essence like tea,—but when instead, warned by the odour, you either put down the evil- looking beverage untested, though with senses sufficiently demo- ralized even by the scent, or else in a fit of absence of mind you swallow unwittingly an antidote to the whole evening's sensuous influences, and repair with a sense of moral degradation and a wrecked existence, such as we suppose Hindoos would feel if they had been made to swallow beef, not (if you can help it) to the drawing-room, but to the solitary bitterness of your own premises. But we willingly admit that coffee is often made good by servants, though it requires far more real skill to make it than tea, which requires nothing but true feeling. The reason is, we suppose, that coffee has a stronger and coarser soul than tea. It is indeed of the nature of a food, and you hear people talk of miss- ing it at their breakfast, not in the tone in which they would talk of missing the sun or missing a pleasant face, but as they would talk of missing their beef or bread ; and it is, though with other and higher attributes, a species of solid. But not so tea. If we found a servant who could make tea with true feeling, we should believe that there was culture in her mind mid here- ditary delicacy in her organization, in spite of the broadest vulgar- isms and the most raw-boned frame. It has never, however, hap- pened to us hitherto to meet with one. Of the horrors of kitchen tea under all possible external conditions we have had some experience. We have given out the species, prescrib:3.1 the

treatment with all minuteness, and yet received back a cup of coarse and nauseous fluid, which, if swallowed at all, is swallowed like a medicine, for its sedative qualities, and with an effort not to taste it. The simple truth is that the vulgar taste like4 the secondary flavour of tea, —not the flavour it gives out involuntirily,

as it were, at the first grateful touch of heat, but that extorted

from it by pertinacious decoction. Servants, we believe, usually prefer their own tea boiled. They call it more " satisfying." An

though, if properly urged, they abandon this practice for their employers, nothing will persuade them that tea can be good with- out a deep brown colour. They suppose that the object of making the water boil is the same with tea as with soup, —that tea is a sort of stew, instead of an essence obtained by a momentary combination between water in the moment of passing into steam, and the influence which the leaf puts out under certain atmospheric conditions, just as sweet- smelling plants will throw out all their fragrance at sunset. The reason servants cannot see the truth is no want of physical, but want of intellectual and spiritual culture. If they had noticed. how all living creatures have good momenta, and characteristic moments, if you only knew how to seize them, they might know the truth about tea. But they have probably never observel that the moment of meeting a friend, for example, after an absence, has a characteristic power of its own, suitable for certain flavours of expression or manner which would become altogether

forced, awkward, impossible, if they were delayed. If you miss the opportunity of the moment of meeting, the whole current of

feeling at that meeting may go wrong. Such things they have not been taught or in a position to observe ; if they had, they would be able to realize better how the instantaneous flavour shed forth at the first touch of boiling water on the tea, is the final cause of tea. Even the old childish rhyme might teach those who have ears to hear :-

" This fragrant shrub in China grows, The leaves are all we see ;

And these, when water on them flows, Make what we call our tea."

" Flows," mind,—not " rests," or " soaks,"—the idea implied is the true one, of instantaneous graciousness, of momentary flavour. There is less to be said about the secondary horrors of kitchen tea, for they too often result either from negligence or from necessary but

painful economy, and not from perverted notions. The tea which

is made from water of which the servant says, " It 'ave boiled, Sir," is of course not tea at all, but it is not so bad as the stewed tea which is in favour in the kitchen. It is simply wishy-washy, and the servant knows as well that it is not up even to her own ideal as the master. Then the tea which results after the tea-

pot is replenished is evil arising out of the hampering conditions of existence, out of the difficulty and expense incident to having

an unlimited succession of tea-pots and fresh tea every time,—and such evil as this may after all, looked at in a larger light, be but partial evil' universal good.' But the evil of deliberately sacrificing through the errors of a gross taste a flavour so rare and exquisite as may be obtained from any tea (not below 4s. a pound) properly treated by a cultivated mind, is pure evil, which has increased, is increasing, and ought to be diminished.