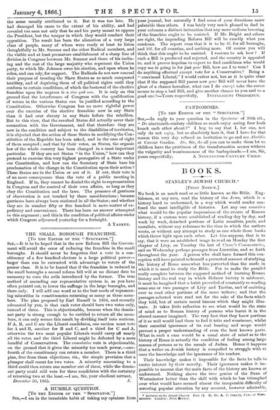 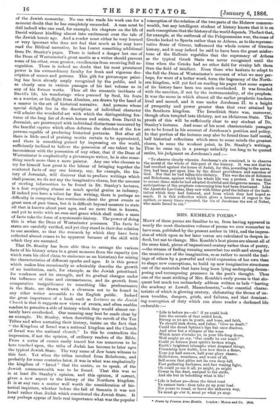 No book is so much read or so little known as the Bible. Eng- lishmen, at any rate, read the history of the Jews, which is a history hard to understand, in a way which would render con- fused the most intelligible of histories. Let any one conceive what would be the popular impressions of the events of Roman history, if a custom were established of reading day by day, and week by week, detached portions of Latin annalists, poets, and moralists, without any reference to the time in which the authors wrote, or without any attempt to study as one whole those books which throw light upon each other. Let him suppose, that is to say, that it were an established usage to read on Monday the first chapter of Livy, on Tuesday the last of Caesar's Commentaries, and on Wednesday perhaps passages from Lucretius, and so forth throughout the year. A person who shall have formed this con- ception will have painted to himself a perverted manner of studying the history of Rome somewhat less perverted than the mode in which it is usual to study the Bible. For to make the parallel really complete between the supposed method of learning Roman history and the real way in which Hebrew history is mislearnt, it must be imagined that a habit prevailed of couatantly re-reading some one or two passages of Livy and Tacitus, and of omitting ever to read other portions of the same writers ; and that the passages selected were read not for the sake of the facts which they told, but of certain moral lessons which they might illus- trate. It takes little reflection to see what would be the state of mind as to Roman history of persons who learnt it in the absurd manner imagined. The very fact that they knew portions of it so well would lead them to feel it trite and wearisome, whilst their essential ignorance of its real bearing and scope would prevent a proper understanding of even the best known parts. What in such a case would be a usual state of mind as to the history of Rome is actually the condition of feeling among large masses of persons as to the annals of Judaea. Hence it happens that a writer on Jewish history is compelled to struggle with at once the knowledge and the ignorance of his readers.

Their knowledge makes it impossible for the facts he tells to excite interest by their novelty. Their ignorance makes it im- possible to assume that the main facts of the history are known or understood. Nothing shows the true genius of the Dean of Westminster better than the skill with which he has triumphed over what would have seemed almost the insuperable difficulty of arresting popular attention by any account, however admirable,

• Lectures on the Janda Church. Part II. 131 Dr. A. P. Sitatiey, 1453 of Welt. minister. London; John Iltirrdy. of the Jewish monarchy. No one who reads his work can for a moment doubt that he has completely succeeded. A man must be dull indeed who can read, for example, his chapters on the life of David without kindling almost into excitement over the tale of the Jewish heroic age. And a reader must either be very learned or very ignorant who does not feel that much as he may have read the Biblical narrative, he has 1 earnt something additional from Dr. Stanley's pages. There is indeed a danger lest one of the Dean of Westminster's great merits as a writer should prevent some of his other, even greater, excellencies from receiving full re- cognition. There is indeed no doubt that his most prominent power is his extraordinary faculty for fresh and vigorous des- cription of scenes and persons. This gift for picturesque paint- ing has been already amply recognized by the public, and is as clearly seen in various passages of his last volume as in any of his former works. Thus all the romantic incidents of David's life, his wanderings when pursued by Saul, his feats as a warrior, or his flight from Absalom, are drawn by the hand of a master in the art of historical narrative. And persons whose special delight lies in the description of individual character will admire the wonderful art with which the distinguishing fea- tures of the long list of Jewish heroes and saints, from David to Jeremiah, are pourtrayed with individual distinctness unmarred by the fanciful caprice which often deforms the sketches of the few persons capable of producing historical portraits. But after all there is little need of praising merits certain to be appreciated, and there is something gained by impressing on the world, suff•;ciently inclined to believe the possession of one talent to be inconsistent with the possession of any other, that if the Dean of Westminster is emphatically a picturesque writer, he is also some- thing much more than a mere painter. Any one who chooses to try for himself how great is the labour of bringing together the scattered facts of any one history, say, for example, the his- tory of Jeremiah, will discover that to produce writings which shall possess, we do not say the imaginative charm, but the amount of sterling information to be found in Dr. Stanley's lectures, is a feat requiring almost as much special genius as industry. If indeed you have a talent for fine writing, there is perhaps no difficulty in composing fine sentiments about the great events or great men of past times, but it is difficult beyond measure to state all that is known about past ages, and no more than is known, and yet to write with an ease and grace which shall make a mass of facts take the form of a systematic history. The power of doing this is what the Dean of Westminster possesses. The facts he states are carefully verified, and yet they stand in their due relation to one another, so that the research by which they have been collected almost ceases to be apparent because of the skill with which they are narrated.

That Dr. Stanley has been able thus to arrange the various facts of his history arises in a great measure from the capacity (on which rests his chief claim to eminence as an historian) for seizing the characteristics of different epochs and ages. It is this power which makes him occasionally so admirably describe the growth of an institution, such, for example, as the Jewish priesthood. Its weakness and its strength, and its gradual changes under the influence of time and circumstances, and its growth from comparative insignificance to something like predominance in the State, are drawn with a clearness not to be found in any other writer accessible to the English public. Indeed the great importance of a book such as Lectures on the Jewish Church is that it suggests new views of events, and often enables readers to perceive a side of history which they would almost cer- tainly have overlooked. Our meaning may best be made clear by an example. Dr. Stanley, when describing the revolt of the Ten Tribes and when narrating their history, insists on the fact that " the Kingdom of Israel was a national kingdom and the Church of Israel was the national church." In this he contradicts the impression, if not the opinion, of ordinary readers of the Bible. From a series of causes easily traced but too numerous to be here touched upon, the tribe of Judah has become to later ages the typical Jewish State. The very name of Jew bears witness to this fact. Yet when the tribes revolted from Rehoboam, and probably for some centuries later, it was in what was emphatically the kingdom of " Israel " that the centre, so to speak, of the Jewish commonwealth was to be found. That this was so is at least Dr. Stanley's opinion, and this opinion, if correct, gives a new aspect to the history of the Northern kingdom. It is at any rate a matter well worth the consideration of his- torical inquirers, whether before the fall of Samaria it was not Israel rather than Judah which constituted the Jewish State. It may perhaps appear of little real importance what was the popular

conception of the relation of the two parts of the Hebrew common- wealth, but any intelligent student of history knows that it is on such conceptions that the historyof the world depends. Thefact that, for example, at the outbreak of the Peloponnesian war, the mass of Greeks looked to Sparta rather than to Athens, as to the represen- tative State of Greece, influenced the whole course of Grecian history, and it may indeed be said to have been the great misfor- tune of the Hellenic republics that the supremacy of Athens as the typical Greek State was never recognized until the time when the Greeks had no other field for rivalry left them than the field of intellect. Even those who hesitate to adopt to the full the Dean of Westminster's account of what we may per- haps, for want of a better word, term the hegemony of the North- ern kingdom, will yet feel on reading his pages that some aspects of its history have been too much overlooked. It was founded with the sanction, if not by the instrumentality, of the prophets.

It was the scene in which almost all the earlier prophetic teachers lived and moved, and it rose under Jeroboam II. to a height of prosperity and power greater than that ever attained by the Southern kingdom. The Israelitish State was, moreover, though often tempted into idolatry, not an idolatrous State. The proofs of this will be sufficiently clear to any student of Dr. Stanley's lectures. And some of his most characteristic passages are to be found in his account of Jeroboam's position and policy. In that portion of the lectures may also be found those half moral, half historical reflections which seem to some minds the greatest charm, to some the weakest point, in Dr. Stanley's writings.

Thus he sums up, in a passage unluckily too long to be quoted entire, his judgment on Jeroboam's end :—

" To observe clearly wherein Jeroboam's sin consisted, is to observe the moral of the whole of this part of the history. It was not that he had revolted against the house of Judah, for this, according to the narra- tive, had been put upon him by the direct providence and sanction of God. Nor that he had fallen into idolatry. This was the sin of Solomon and Rehoboam, against which his whole life was a protest. It was that to secure these ends he had adopted doubtful and dangerous means. The anticipations of the prophets concerning him had been frustrated. Like the Apostolic Las Cases, they saw with bitter grief the failure of the insti- tution which they had fostered, and from which they had hoped so much. It is this reflection which gives a keenness of regret to the epithet, so many times repeated, the sin of Jeroboam the son of Nebat, who made Israel to sin."