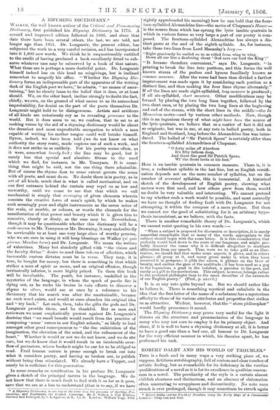 A RHYM.D. - G DICTIONARY.* WALKER, the well known author of the

Critical and Pronouncing Dictionary, first published his Rhyming Dictionary in 1775. A second and improved edition followed in 1806, and since that date there have been several others, the last, we are told, not longer ago than 1851. Dr. Longmuir, the present editor, has subjected the work to a very careful revision, and has incorporated into it 1,800 new words. We think he is unquestionably entitled to the credit of having produced a book excellently fitted to sub- serve whatever uses may be subserved by a book of that nature. What these are is perhaps a more doubtful point. Dr. Longmuir himself indeed has on this head no misgivings, but is inclined somewhat to magnify his office. " Whether the Rhyming Dic- tionary forms an indispensable part of the apparatus of the writing desk of the English poet we have," he admits, " no means of ascer- taining," but he clearly leans to the belief that it does, or at least should. We, on the other hand, incline strongly to doubt the fact, chiefly, we own, on the ground of what seems to us its antecedent improbability, for denial on the part of the poets themselves Dr. Longmuir might hold to be disingenuous. Artists and artificers of all kinds are notoriously coy as to revealing processes to the world. But it does seem to us, we confess, that to set to at making verses by the aid of a rhyming dictionary would be about the dreariest and most unprofitable occupation to which a man capable of writing his mother tongue could well betake himself. Byron, indeed, we have been told (we do not know on what authority the story rests), made copious use of such a work, and it does not strike us as unlikely. For his poetry seems often, as it were, somewhat loosely knit ; the line may be good, but it rarely has that special and absolute fitness to the need which we find, for instance, in Mr. Tennyson. It is some- thing that might be said, not the one thing there admissible. But of course the rhyme does to some extent govern the sense with all poets, and must do so. No doubt there is in poetry, as in art of all kinds, much that is what is called mechanical, and on our first entrance behind the curtain may repel us as low and unworthy, until we come to see that that which we call mechanical is simply that arranging of given elements wherein consists the creative force of man's spirit, by which he makes such seemingly poor and slight instruments as the seven notes of the scale, or marble, or colours, or words the channels for the manifestation of that power and beauty which it is given him to conceive, clearly or dimly, as the case may be. Nevertheless, though it may be questionable whether this dictionary will be a vade-mecum to Mr. Tennyson or Mr. Browning, it may undoubtedly be serviceable to at least one very large class of worthy persons, who we are sure in using it will heap blessings on Walker (si quiz piorunt Manibus locus) and Dr. Longmuir. We mean the writers of valentines. Many but slenderly gifted with "the vision and the faculty divine" desire to send these tokens of affection, which inexorable custom dictates must be in verse. They may, it is true, be bought for money, but there is something in that which strikes a man of spirit as mean, and an original effusion, though intrinsically inferior, is more highly prized. To them this book will be invaluable. The youth, for instance, unskilled in the mysteries of the language, in whom the spark of poetic fire is dying out, as he racks his brains in vain efforts to discover a rhyme to silver, would see at once by a reference to his dictionary that his search was after the unattainable, because no such word exists, and would at ones abandon his original idea and " try back." Let such then, take the gifts the gods and Dr. Longmuir provide them, and be thankful. But as men and reviewers we must emphatically protest against Dr. Longmuir's doctrine that "no small benefit would result from the practice of composing sense' verses in our English schools," as likely to lead amongst other good consequences to " the due cultivation of the imagination, the elevation of the mind, and the refinement of the heart." Whether it would or not we do not know, and we do not

care, but we do know that it would result in an intolerable over- flow of poetasters, whose books it might be our lot to be obliged to read. Frail human nature is prone enough to break out into what it considers poetry, and having so broken out, to publish without being thus stimulated. We already have a Tupper, and surely he is sufficient for this generation.

In some remarks on versification in his preface Dr. Longmuir gives a sketch of the principal metres in the language. We do not know that there is much fault to find with it as far as it goes, save that we are at a loss to understand (that is to say, if we have

A Rhyming Dictionary, a,uwe,-ing at the same tune the purposes of Spelling. Pie nouncing, and Explaining the .English Language. By J. Wallo.r, a New Edition, Revised and Enlarged, by J. Lougnulir, A.M., LL.D. London: William Tegg. 1865. rightly apprehended his meaning) how he can hold that the four- teen-syllabled Alexandrine line—the metre of Chapman's Homer— is the source from which has sprung the lyric iambic quatrain in which in various forms so very large a part of our poetry is com- posed. The fourteen-syllabled Alexandrine has always a dis- tinct pause at the end of the eighth syllable. As, for instance, take these two lines from Lord Macaulay's Ivry :- "Right graciously he smiled on us as rolled from wing to wing,

Down all our line a deafening shoat God save our lord the Sing '."

" It became therefore convenient," says Dr. Longmuir, " in printing to break the line into portions, and this forms the well known stanza of the psalms and hymns familiarly known as

common measure. After the verse had been thus divided a farther improvement was made upon it by considering each portion as a distinct line, and then making the four lines rhyme alternately." If all the lines are made eight-syllabled, long measure is produced ; if all six-syllabled, short measure. Other modifications may be

and end of the stanza, with the short lines in the middle—the In Memoriam metre—and by various other methods. Now, though this is an ingenious theory of what might have been the source of the lyric quatrain, we believe that as a matter of fact it did not so originate, but was in use, at any rate in ballad poetry, both in England and Scotland, long before the Alexandrine line was intro-

duced. The ballad of " Sir Patrick Spells" is certainly older than the fourteen-syllabled Alexandrines of Chapman.

And there lies good Sir Patrick Spens, WI' the Scots lords at his feet."

Here is an iambic quatrain in common measure. There is, it is true, a redundant syllable in the last line, but as English versifi- cation depends not on the mere number of syllables, but on the

number of accented syllables, this is immaterial. A. historical sketch of the development of English poetry, showing what metres were first used, and how others grew from them, would no doubt be very valuable and interesting. We cannot pretend

to say whether such a work would be possible, and most assuredly we have no thought of finding fault with Dr. Longmuir for not attempting it within the compass of a mere preface. But then we cannot see the good of substituting for it an arbitrary hypo- thesis inconsistent, as we believe, with the facts.

There is another remarkable theory of Dr. Longmuir's, which we cannot resist quoting in his own words :—

" When a subject is proposed for discussion or description, it is surely. somewhat remarkable that so many of the words appropriate to the subject should begin with the same letter. It is this consideration that probably would lead down to the roots of our language, and might pro- bably discover the cause why it is difficult altogether to eradicate alliteration from our speech. Thus, wore wo to take gold as an illus- tration, we should find that under some aspects it glows, and in others gleams ; all grasp at it, and many groan under it, when they have received it in gowpens; it gilds the saloon, it glitters on the brow of beauty, and excites the gaze of the multitude ; it has been used as a gag to the loquacious, a goad to the indolent, a guerdon to the poet, and rarely as a gift to the meritorious. This subject, however, belongs rather to the profound philologist than to the mere describer of the externals of our English poetry." (Pref., p. xxxvii.)

It is at any rate quite beyond us. But we should rather like to believe it. There is something mystical and cabalistic in the idea that the first letter of the name of a substance has a mysterious affinity to those of its various attributes and properties that strikes us as attractive. We fear, however, that the " stern philosopher" would hardly pronounce it sound.

The. Rhyming Dictionary may prove very useful for the light it throws on the structure and pronunciation of the language to many who may not care to employ it for its primary object. And since, if it is well to have a rhyming dictionary at all, it is better to have a good one than a bad one, all honour to Dr. Longmuir for the very efficient manner in which, his theories apart, he has performed his task.