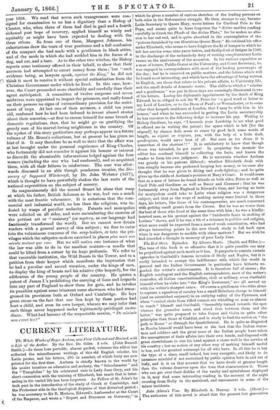 The Whole Works of Roger Ascham, now First Collected and Revised, with a Life of the Author. By the Rev. Dr. Giles. 4 vols. (John Russell Smith.)—In these four portable, almost pocket, volumes the editor has collected the miscellaneous writings of this old English scholar, his Latin poems, and his letters, 295 in number, of which forty are now printed for the first time. Ascham is chiefly known to the world by his quaint treatises on education and archery, the " Schoolmaster " and the " Toxophilus " by his celebrated visit to Lady Jane Grey, and his short connection with the training of Elizabeth, but much that is inter- esting in his varied life has been forgotten. As Fellow of St. John's he took part in the introduction of the study of Greek at Cambridge, and the Protestant aide in the theological disputes of that disturbed period ; he was secretary to Sir R. Morison, Edward's Ambassador at the Court of the Emperor, and wrote a " Report and Discourse on Germany," in which he gives a number of curious sketches of the leading persona on both sides in the Reformation struggle. He then, strange to say, became Latin Secretary to Queen Mary, wrote letters for Cardinal Pole to the Pope, and seems quite to have forgotten the " divine maiden reading carefully in Greek the Phcedo of the divine Plato," for he makes no allu- sion to her sad end, and is quite absorbed in the contemplation of the "pattern furnished by our illustrious Queen Mary." He retained his office under Elizabeth, who seems to have forgiven the fit of temper in which he left her service some nine years before, and finally died. of fatigue in 1568, in the discharge of the melancholy duty of writing complimentary Latin verses on the anniversary of the accession. In his various capacities as a man of letters, Public Orator at the University, and Court Secretary, ho was engaged in correspondence with most of the loading personages of the day ; but ho is reserved on public matters, and the letters which will be found most interesting, and which have the advantage of being written in English, are those that relate to his private affairs, to University life, and the small details of domestic wants. The shifts to which a "scholar and a gentleman " was put in those days are amusingly illustrated in two of his letters. Losing his diplomatic appointment by the death of King Edward, he is obliged to ask Sir W. Petro for "a good word or letter to my Lord of London, or to the Dean of Paul's or Westminster, or to some other that keepeth residence at London, that I may be with him in his houses," and when he has succeeded in getting the Latin secretaryship he has recourse to the following dodge to increase his pay. Writing to Bishop Gardiner, he says, "I beseech your Lordship to see what good is offered me in writing the patent ; the space which is left [for the stipend] by chance doth seem to crave by good luck some words of length, as viginti or trig inta, yea, with the help of a little dash, quadraginta, would serve best of all. But sure as for decent it Is somewhat of the shortest !!" It is satisfactory to know that though decent was intended, he got viginti In preparing the memoir the editor has confined himself to collecting the facts, and leaves the reader to form his own judgment. He is uncertain whether Ascham was greedy or his patrons illiberal ; whether Elizabeth dealt with him stingily because she preferred keeping her money, or because she thought that he was given to dicing and cock-fighting ; and he quite gives up the riddle of Ascham's position at Mary's Court. It would seem that as a man of letters he found friends on both sides, Petre as well as Cecil Pole and Gardiner as well as Bucer and Cranmer ; that he was fortunately away from England in Edward's time, and having no taste for martyrdom could take to Latin when religion was a dangerous subject, and that as the ways of making money were limited in those days, his letters, like those of his contemporaries, are much concerned with getting small grants from the Crown. But he was no worse than the best of those who lived at the same time with him ; he was a kindly- hearted man, as his protest against the " butcherlie feare in making of Latinos " shows, and if he was a bit of a trimmer in politics and religion, what more could be expected from a man of weak constitution, who had always interesting points in the new Greek study to fall back upon when it was dangerous to meddle with other matters ? But we wish he had recorded a thought in memory of poor Lady Jane.