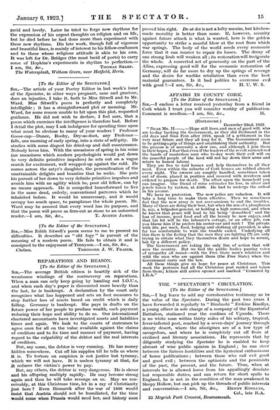 Sia,—The average British citizen is heartily sick of the wearisome windings of the controversy on reparations. When a man can only keep going by handing out I.O.U.s, and when each day's paper is discounted more heavily than the last, he is bankrupt. A declaration by the court only recognizes what has happened and sets on foot measures to stop further loss of assets based on credit which is daily falling. Germany is bankrupt. She pays in drafts on the future power of her people to produce wealth, each payment reducing their hope and ability to do so. Our international chartered accountants have investigated assets and liabilities times and again. We look to the courts of statesmen to agree once for all on the value available against the claims of creditors and to fix time and manner of payment, having regard to the culpability of the debtor and the real interests of creditors.

But, say some, the debtor is very cunning. He has money hidden somewhere. Cut off his supplies till he tells us where it is. To torture on suspicion is not justice but tyranny, which we will not have. IV is useless tyranny at that, for A reduces the victim's power to pay.

But, say others, the debtor is very dangerous. He is clever and his offspring multiply rapidly. He may become strong again and then he will take revenge on us. May we con- ceivably, at this Christmas time, let in a ray of Christianity just here ? Even Bismarck after the war of 1866 would insist that Austria should not be humiliated, for the time would come when Prussia would need her. and history soon

proved him right. Do ut des is not a lofty maxim, but kitchen- made morality is better than none. If, however, security against future attack is what is wanted, here is the golden opportunity to strike a manful blow at the root from which war springs. The body of the world needs every economic force that it can muster to repair its losses. The decay of one strong limb will weaken all ; its restoration will invigorate the whole. A concerted act of generosity on the part of the Allies, expressing good will for the economic restoration of Germany, will do far more to dry up the springs of revenge and the desire for warlike retaliation than even the best material guarantees. Is it bad politics to overcome evil