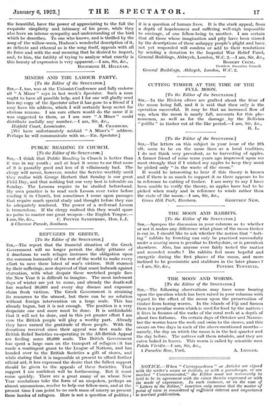 Snt,—The report that the financial situation of the Greek Government will no longer permit the . daily pittance of 2 drachmas to each refugee increases the obligation upon the common humanity of the rest of the world to make every effort to save these latest of war's victims. Still stunned by their sufferings, now deprived of that scant bulwark against starvation, with what despair these wretched people face the New Year it is difficult to imagine. The most inclement days of winter are yet to come, and already the death-roll has reached 30,000 and every day disease and exposure claim fresh victims. The Greek Government is straining its resources to the utmost, but there can be no solution without foreign intervention on a large scale. This has already begun, but it is not enough. The position is a very desperate one and more must be done. It is unthinkable that it will not be done, and in this yet greater effort I am sure the British people will play a worthy part. Already they have earned the gratitude of these people. With the donations received since their appeal was first made the British Relief Societies co-operating in the All-British Appeal are feeding some 20,000 souls. The British Government has spent a large sum on the transport of refugees : it has made a contingent grant to the League of Nations, and has handed over to the British Societies a gift of stores, and while stating that it is impossible at present to afford further official aid, it has expressed the desire that the fullest support should be given to the appeals of these Societies. That support I am confident will be forthcoming. But it must come quickly. There are a great many of us whose New Year resolutions take the form of an unspoken, perhaps an almost unconscious, resolve to help our fellow-men, and at the present time I can point to no such mass of misery as present these hordes of refugees. Here is not a question of politics ;

it is a question of human lives. It is the stark appeal, from a depth of hopelessness and suffering. well-nigh impossible to envisage, of one fellow-being to another. I ant certain that all those whose imagination and pity have been stirred by the descriptions of these unhappy people's plight and have not yet responded will confirm or add to their resolutions by sending a donation to the Imperial War Relief Fund, General Buildings, Aldwych, London, W.C. 2.—I am, Sir, &c.,