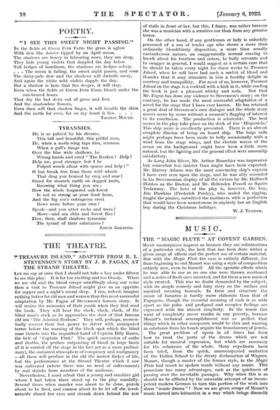 TREASURE ISLAND," ADAPTED FROM R. L. STEVENSON'S STORY BY J. B. FAGAN, AT THE STRAND THEATRE.

LET me say at once that I should not take a boy under fifteen to see this play. It is far too exciting and too bloody. When we are old and the blood creeps unwillingly along our veins then a visit to Treasure Island might give us an appetite for supper and a night's sound sleep. I can, indeed, imagine nothing better for old men and women than this most successful adaptation by Mr. Fagan of Stevenson's famous story. It will revive the memories of their youth when they first read the book. They will hear the clack, clack, clack, of the blind man's stick as he approaches the door of that famous old inn ' The Admiral Benbow.' They will, perhaps, momen- tarily recover their lost power to shiver with anticipated terror before the warning of the black spot which the blind man thrusts into the anguished hand of Captain Billy Bones, the heir of ` Captain Flint.' The quick succession of oaths and deaths, the profuse outpouring of blood (a large basin of it is carried off the stage in the first act as a mere prelimi- nary), the sustained atmosphere of conspiracy and malignancy —all these will produce in the old the merest flicker of life, but the performance at the Strand Theatre which I saw was enlivened (where there was no need of enlivenment) by real shrieks from members of the audience.

Nevertheless, I must admit that a young and sensitive girl whom I had taken there stood up to the play manfully. Several times when murder was about to be done, pistols about to be fired, and cannon about to be let off she invol- untarily closed her eyes and shrank down behind the row

of stalls in front of her, but this, I fancy, was rather because she was a a musician with a sensitive ear than from any genuine terror.

On the other hand, if any gentleman or lady is unluckily possessed of a son of tender age who shows a more than ordinarily bloodthirsty disposition, a more than usually cantankerous nature, an exaggeratedly normal craving to knock about his brothers and sisters, to bully servants and to swagger in general, I would suggest as a certain cure that he should be taken every night for three weeks to Treasure Island, when he will have had such a surfeit of blood and thunder that it may stimulate in him a healthy delight in courtesy and tranquillity. For most of us, however, Treasure Island on the stage is a cocktail with a kick in it, while reading the book is just a pleasant whisky and soda. Not that Mr. Fagan has done any violence to Stevenson's story ; on the contrary, he has made the most successful adaptation of a novel for the stage that I have ever known. He has retained a great deal of Stevenson's own dialogue and the whole story moves scene by scene without a moment's flagging of interest to its conclusion. The production is admirable. The best scenes in the play take place on the deck of the `

This ship scene is excellently presented. There is an almost complete illusion of being on board ship. The large sails might perhaps have been made to belly occasionally with a wind from the stage wings, and the electric waves of the ocean on the background might have been a little more natural, but the lighting and the general effect were unusually satisfactory.

As Long John Silver, Mr. Arthur Bourchier was impressive but somewhat less sinister than might have been expected. Mr. Harvey Adams was the most convincing ship's captain I have ever seen upon the stage, and he was ably seconded in his Stevensonian display of all the virtues by Mr. Halliwell Hobbes as the Doctor, and Mr. Bellenden Powell as Squire Trelawney. The hero of the play is, however, the boy, Jim Hawkins (Frederick Peisley), who scaled the rigging, fought the pirates, outwitted the mutineers with a perfection that would have been monotonous in anybody but an English boy during the Christmas holidays. W. J. TURNER.