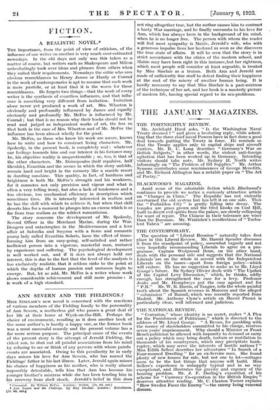 ANN SEVERN AND THE FIELDINGS.t Miss SINCLAIR'S new novel is

concerned with the reactions of various members of the Fielding family to the personality of Ann Severn, a motherless girl who passes a great deal of her life at their home at Wyck-on-the-Hill. Perhaps the choice of environment, recalling as it does another book of the same author's, is hardly a happy one, as the former book was a most successful comedy and the present volume has a far more serious purpose. The principal cause of the events of the present story is the attempt of Jerrold Fielding, the eldest son, to shut out all painful associations from his mind by refusing to sec or think of any persons with whom painfu events arc associated. Owing to this peculiarity he in early days misses his love for Ann Severn, who has nursed the Fieldings' father in his last illness. Later, Jerrold again misses his chance of happiness as his mother, who is really almost impossibly detestable, tells him that Ann has become his younger brother's mistress while she has been tending him in his recovery from shell shock. Jerrold's belief in this does

t Ann Severn and the Fieldings. By May Sinclair. London : Hutchinson. ed. nets not ring altogether true, but the author causes him to contract a hasty War marriage, and he finally succumbs to his love for Ann, which has always been in the background of his mind, when he is no longer free. The person with whom the reader will feel most sympathy is Maisie, Jerrold's wife, who with a generous impulse frees her husband as soon as she discovers the true state of affairs. It will be seen that the story is in strict accordance with the ethics of the modern school, and Maisie may have been right in this instance, but her rightness, which most people will consider at least arguable, is treated by Miss Sinclair as a truism. Both Ann and Jerrold are made of sufficiently fine stuff to detest finding their happiness at the cost of the misery of another human being. It is hardly necessary to say that Miss Sinclair is a past-mistress of the technique of her art, and her book is a masterly picturc of modern life, having special regard to its sex-problems.