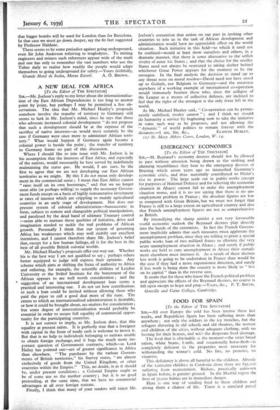 Sra,—Mr. Joelson's reply to my letter about the internationalisa- tion of the East African Dependencies is too long to answer point by point, but perhaps I may be permitted a few ob- servations. The idea that Mr. Michael Huxley's proposals somehow involve the transfer of territory to Germany still seems to lurk in Mr. Joelson's mind, since he says that those who advocate increased colonial development " do not propose that such a development should be at the expense of the sacrifice of native interests—as would most certainly be the case if Germany were once more to administer African terri- tory." What would happen if Germany again became a colonial power is beside the point ; the transfer of territory to Germany forms no part of this discussion.

Where I should like to join issue with Mr. Joelson is in his assumption that the interests of East Africa, and especially of the natives, would necessarily be best served by indefinitely maintaining the status quo. He would, I am sure, be the first to agree that we are not developing our East African territories as we might. By this I do not mean only develop- ment in the commercial sense ; I mean that East Africa cannot " raise itself on its own bootstraps," and that we no longer seem able (or perhaps willing) to supply the necessary Govern- ment funds except on a basis of highly remunerative investment at rates of interest which are crippling to mainly agricultural countries in an early stage of development. Nor does our present system of colonial administration—bureaucratic in form, subject to remote and changeable political manipulation, and paralysed by the dead hand of ultimate Treasury control —seem able to nurture those qualities of initiative, drive and imagination needed to tackle the real problems of African growth. Personally I think that our system of governing Africa has weaknesses which may well stultify our excellent intentions, and I cannot therefore share Mr. Joelson's belief that, except for a few human failings, all is for the best in the best of all possible British colonial worlds.

Mr. Michael Huxley's proposals offer one way out. Whether his is the best way I am not qualified to say ; perhaps others better equipped to judge will express their opinions. Any scheme which ainis at shifting the focus of authority to Africa and enlisting, for example, the scientific abilities of Leyden University or the Svalof Institute for the betterment of the African appears to me well worth consideration ; and the suggestion of an international development loan seems a practical and interesting one. I do not see how contributions to such a loan could be invited without allowing those who paid the piper to call a good deal more of the tune. The extent to which an internationalised administration is desirable, or how it could be brought about, are matters for consideration ; but some degree of internationalisation would probably be essential in order to secure full equality of commercial oppor- tunity for the participating countries.

It is not correct to imply, as Mr. Joelson does, that this equality at present exists. It is perfectly true that a foreigner with capital in the form of ready cash is welcome to invest it. But that is no help to individuals belonging to nations unable to obtain foreign exchange, and it begs the much more im- portant question of Government contracts, which—as Lord Halley has pointed out—are of greater significance in Africa than elsewhere. " The purchases by the various Govern- ments of British territories," his Survey states, " are almost exclusively of goods from the United Kingdom, or other countries within the Empire." This, no doubt, is as it should be, under present conditions ; a Colonial Empire ought to be of some use to the mother country ; but it is no good pretending, at the same time, that we have no commercial advantages at all .over foreign nations.

Finally, I think that many of your readers will reject Mr. Joelson's contention that action on our part in inviting other countries to join us in the task of African development and administration would have no appreciable effect on the world situation. Such initiative in this field—to which it need not be confined—would at least show ourselves and others, in a dramatic manner, that there is some alternative to the selfish rivalry of autar kic States ; and that the choice for the smaller States need not always be restricted to taking shelter behind whichever Great Power appears for the moment to be the strongest. In the final analysis the decision to stand up to any threat rests on moral resolve—David need not have stood up to Goliath, nor Belgium to Germany—and the existence anywhere of a working example of international co-operation would immensely hearten those who, since the collapse of the League as a means of collective defence, are inclined to feel that the right of the strongest is the only force left in the world.

As Mr. Michael Huxley said, " Co-operation can be perma- nently stabilised, rivalry cannot " ; and I think we should do humanity a service by beginning now to take the initiative in some such way as he proposes, and not allowing the " dynamic " of world politics to remain forever with the