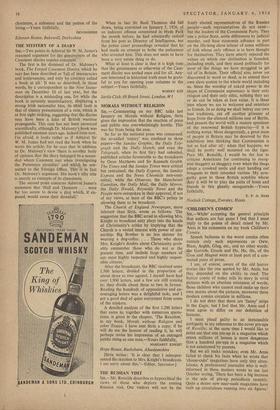 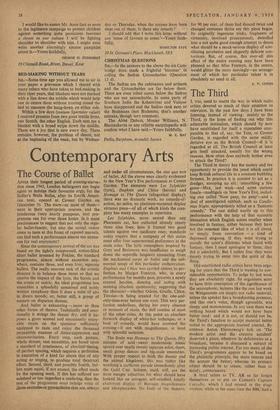 SIR,—While° accepting the general principle that authors are fair game I feel that I must reply to the points of detail raised by Mr. Amis in his comments on my book Children's Comics.

Speech balloons in the worst comics often contain only such expressions as Oww, Slam, Arghh, Glug, etc., and no other words; the Garooh, Grooh and Ha, Ha, Ha, of the Gem and Magnet were at least part of a con- nected piece of prose.

I am, of course, aware of the old horror stories like the one quoted by Mr. Amis, but they depended on the ability to read. The horror comic of today tells its story in vivid pictures with an absolute minimum of words; those children who cannot read make up their own stories about the pictures, moreover these modern comics circulate in millions.

1 do not deny that there are `funny' strips in the Eagle, but I feel that Mr. Amis and I must agree to differ on our definition of humour.

I must plead guilty to an inexcusable ambiguity in my reference to the cover pin-ups of Reveille; at the same time I would like to point out that one pin-up in a magazine which enters millions of homes is more dangerous than a hundred pin-ups in a magazine which is not sanctioned by parents.

But we all make mistakes; even Mr. Amis failed to check his facts when he wrote that `cheese-cake' magazines have only tiny circu- lations. A professional journalist who is well- informed in these matters wrote to me last October saying, 'There has been a big increase in the sale of pin-up periodicals recently. Quite a dozen new near-nude magazines have built up circulations running into six figures.'

I would like to assure Mr. Amis that as soon as the legitimate campaign to protect children against something quite pernicious becomes a threat to ors• culture I will be fighting shoulder to shoulder with him. I might even write another alarmingly sincere pamphlet about it.—Yours faithfully, GEORGE H. PUMPHREY