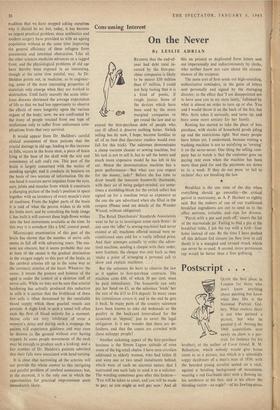 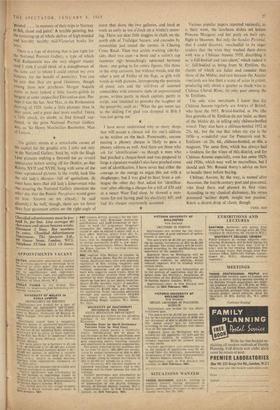 'painted . . . in memory of their trips to Norway to fish, shoot and paint.' A terrible painting, but the summing-up of whole shelves of high-minded aM horribly healthy mid-Victorian books for boys.

There is a type of drawing that is just right for the National Portrait Gallery, a type of which Will Rothenstein was the very elegant master (and I wish I could think of a draughtsman of the Same sort to whom I could entrust my own features, for the benefit of posterity). You can he sure that they are good likenesses, though among these new purchases Margot Asquith seems to have looked a little Gaiety-girlish to Sargent at some unspecified Edwardian date. Per- haps it was the hat. And Max, in the Rothenstein drawing of 1928, looks a little plumper than in later ears:and a great deal more soulful. Taken little aback, no doubt, to find himself cap- tioned, in the prim National Portrait Gallery way, as 'Sir Henry Maximilian -Beerbohm, Man of Letters. .

The gallery stands at a remarkable corner of the capital for the graphic arts. 1 refer not only tO the National Gallery, hard by, with the Hugh Lane pictures Making a farewell (or au reroir) appearance before setting •otf for Dublin. so that Rooms XVII and XVIII, hung with some of the most reproduced pictures in the world, look like lite old lady's Ifamlet--full of quotations. (It must have been that old lady's kinswoman who was assuring the National Gallery attendant the Other day that the Renoir Parophdes would grow on him. 'Grown on me already,' he said gloomily.) As well, though, there are no fewer than four pavement artists on the right-angle of street that skirts the two galleries, and hard at Nvork as early as ten o'clock on a winter's morn- ing. There are dear little doggies in chalk on the north side of Trafalgar Square. and cascades by moonshine just round the corner, in Charing Cross Road. Then two artists working side-by- side, their two caps—a beret and a sailor's cap (summer rig)—beseechingly upturned between them: one going in for comic figures, like those in the strip cartoons, but without words, and the other a sort of Feiffer of the flags, as glib with words as with pictures, interspersing4he portraits of pussy cats and the still-lives of assorted comestibles with extensive slabs of unpunctuated prose, written partly in block capitals, partly in script, and intended to provoke the laughter of the passer-by. such as: 'What the gas meter say to the shilling I'm glad you dropped in Bob I was just going out.'

I have never understood why so many shops that will accept a cheque ask for one's address to be written on the back. Presumably, anyone passing a phoney cheque is likely to pass a phoney address as well. And there are those who ask for 'identification'--as though a man who had pinched a cheque-book and was prepared to forge a signature wouldn't also have pinched some sort of identification. I have never had either the courage or the energy to argue this out with a shopkeeper, but I was .glad to hear from a col- league the other day that, asked for 'identifica- tion' after offering a cheque for a bill of £30 odd at a smart West End shop, he showed a sum- mons for not having paid his electricity bill, and had his cheque courteously accepted. Various popular papers reported variously, as is their wont, the luncheon dishes set before Princess Margaret and her party on their epic flight to Shannon. But only the Sunday Pictorial. that I could discover, vouchsafed to its eager readers that the wine they washed them down with was a Château Ausone 1953, describing it as 'a full-bodied and rare claret,' which indeed it is: full-bodied as being from St. Emilion, the clarets of which are fuller and rounder than those of the Mddoc, and rare because the Ausone vineyards are less than a score of acres in .extent, producing only about a quarter as much wine as Château Cheval Blanc. its only peer among the St. Emilions.

The only wine merchants 1 know that list Château Ausone regularly are Averys of Bristol. who have the 1953. Bristol-bottled, at 19s. (the first growths of St. Emil ion do not insist, as those of the Medoc do, in selling only château-bottled wines). They also have a château-bottled 1.952 at 25s. 6d., but the one that takes my eye is the 1950—a wonderful year for Pomerols and St. Emilions—at 28s. 6d., château-bottled, or 60s. a magnum. The same firm, which has always had a fondness for the wines of this district, and for Château Ausone especially, even has some 1923s and 1926s, which may well be marvellous, but I should seek Mr. Ronald Avery's advice on how to handle them before buying.

Château Ausone, by the way, is named after Ausonius, the fourth-century poet and proconsul, who lived there and planted its first vines. According to my classical dictionary, his verses possessed 'neither depth, insight nor passion.' Knew a decent drop of claret, though.