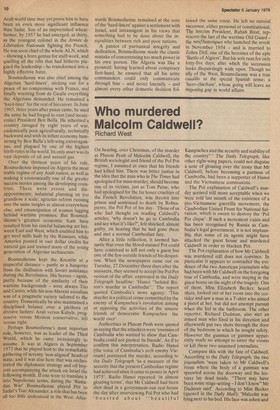 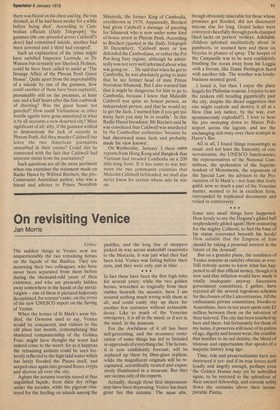 On hearing, over Christmas, of the murder at Phnom Penh of Malcolm Caldwell, the British sociologist and friend of the Pol Pot regime, I assumed at once that his friends had killed him. There was bitter justice in the idea that the man who in The Times had apologised for mass murder, should become one of its victims, just as Tom Paine, who had apologised for the far lesser cruelties of the French Revolution, was thrown into prison and sentenced to death by Robespierre, the Pol Pot of his day. Those of us who had thought on reading Caldwell's articles, 'why doesn't he go to Cambodia and see what it's like?', felt shocked, almost guilty, on hearing that he had gone there and met a normal Cambodian fate.

After a little reflection, it seemed fantastic that even the blood-stained Pot could have contrived to kill not only a guest but one of the few outside friends of his despotism. When the newspapers came out on Tuesday, 27 December three days after the massacre, they seemed to accept the Pol Pot version of the affair, expressed in the Daily Telegraph headline: `Hanoi "behind Briton's murder in Cambodia".' The report quoted Cambodia's news agency: `This murder is a political crime committed by the enemy of Kampuchea's revolution aiming at opposing the activities of the sincere friends of democratic Kampuchea the world over'.

Authorities in Phnom Penh were quoted as saying that the attackers were 'enemies of Cambodia who wanted to show that Cambodia could not protect its friends'. As if to confirm this interpretation, Radio Hanoi (the voice of Cambodia's arch enemy Vietnam) portrayed the murder, according to the Daily Telegraph 'as a measure of the security that the present Cambodian regime had achieved since it came to power in April 1975'. Radio Hanoi reported 'in almost gloating terms', that Mr Caldwell had been shot dead in a government-run rest-house the day after interviewing Pol Pot who had 'boasted about "beautiful Kampuchea and the security and stability of the country"' The Daily Telegraph, like other right-wing papers, could not disguise a note of gloating over the irony that Mr Caldwell, before becoming a partisan of Cambodia, had been a supporter of Hanoi and the Vietnamese communists.

The Pot explanation of Caldwell's murder seemed still more acceptable when we were told last month of the existence of a pro-Vietnamese guerrilla movement, the Cambodian United Front for National Salvation, which is sworn to destroy the 'Poi Pot clique'. If such a movement exists and has been recognised by Russia as Cambodia's legal government, it is not implausible that some of its agents might have attacked the guest house and murdered Caldwell in order to blacken Pot.

The Pot explanation of how Mr Caldwell was murdered still does not convince. In particular it appears to contradict the evidence of the two American journalists who had been with Mr Caldwell on the foregoing tour of Cambodia, and were staying in the guest house on the night of the tragedy. One of them, Miss Elizabeth Becker, heard shots, looked out of her room into the corridor and saw a man in a T-shirt who aimed a pistol at her, but did not attempt pursuit when she hid in the bathroom. The other reporter, Richard Dudman, also met an armed man who fired in his direction and afterwards put two shots through the door of the bedroom in which he sought safety. However the gunman or gunmen apparently made no attempt to enter the rooms or kill these two unarmed journalists.

Compare this with the fate of Caldwell. 'According to the Daily Telegraph, the two journalists 'were taken to Mr Caldwell's room where the body of a gunman was sprawled across the doorway and the lecturer lay dead inside. "There may have been some stage-setting — I don't know" Mr Dudman said'. According to Miss Becker (quoted in the Daily Mail): `Malcolm was lying next to his bed. His face was ashen and there was blood on his chest and leg. He was dressed, as if he had been awake for a while before being shot'. According to Cambodian officials (Daily Telegraph) 'the gunman (the one sprawled across Caldwell's door) had committed suicide, another had been arrested and a third had escaped'.

Such an explanation of the crime might have satisfied Inspector Lestrade, or Dr Watson but certainly not Sherlock Holmes, could he have been called to assist at 'The Strange Affair of the Phnom Penh Guest House'. Quite apart from the improbability of a suicide by one of the gunmen, how could another of them have been captured. presumably still on the premises, at least one and a half hours after the first outbreak of shooting? Was the guest house not guarded? How could Vietnamese or other hostile agents have gone unnoticed in what is by all accounts a now deserted city? Most significant of all: why, if the gunmen wished to demonstrate the lack of security in Phnom Penh, did they murder Caldwell but leave the two American journalists unscathed in their rooms? Could this be connected with the fact that Caldwell had separate status from the journalists!?

Such questions are all the more pertinent when one examines the statement made on Radio Hanoi by Wilfred Birchett, the proCommunist Australian author, who was a friend and adviser to Prince Norodom Sihanouk, the former King of Cambodia, overthrown in 1970. Apparently, Birchett had given Caldwell a message of greeting for Sihanouk who is now under some kind of house arrest in Phnom Penh. According to Birchett (quoted in the Daily Telegraph 30 December): 'Caldwell more or less defended the Cambodians, or rather the Pol Pot-Ieng Sary regime, although he admittedly was not very well informed about what was going on. . . He said that when he got to Cambodia, he was absolutely going to insist that he see former head of state Prince Norodom Sihanouk. But I also warned him that it might be dangerous for him to go to Cambodia, because I know that Malcolm Caldwell was quite an honest person, an independent person, and that he would try to get the facts. I warned him if you get too many facts you may be in trouble'. In this Radio Hanoi broadcast, Mr Birchett said he was convinced that Caldwell was murdered by the Cambodian authorities 'because he had discovered some facts and probably made his view known'.

On Wednesday, January 3, there came reports from Hong Kong and Bangkok that Vietnam had invaded Cambodia on a 200 mile-long front. If it has come to war between the two communist countries that Malcolm Caldwell befriended, we shall alas never know for certain whose side he was on.