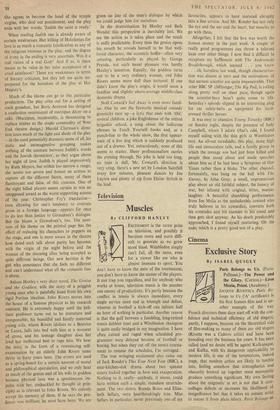 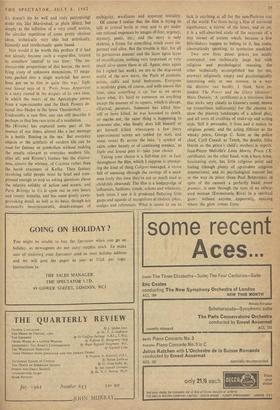 Paris Belongs to Us. (Paris-

Morin, Priest. (Academy.) JACQUES RIVETTE'S Paris Be- longs to Us ('A' certificate) is his first feature film and is an- other example of the way French directors these days start off with the con- fidence and technical efficiency of old stagers; partly, I suppose, because on the theoretical side of film-making so many of them are old stagers (Rivette was a Cahiers critic) and have been brooding over the business for years. It has been called (and no doubt will be again) Kafkaesque, and Kafka, with his dangerous applicability to modern life, is one of the temptations, indeed traps, that modern artists are likely to tumble into, feeling somehow that atmospherics and obscurity brewed up together must necessarily produce something significant. My own feeling about the enigmatic in art is not that it cam- ouflages defects or increases the likelihood of insignificance but that it takes an outsize artist to rescue it from plain idiocy. Paris Belongs 10 Us doesn't (to be well and truly patronising) strike me, like Marienbad, as plain idiocy, but simply as the inflation of a very small notion, the circular repetition of some pretty obvious ideas, technically very able but artistically, humanly and intellectually quite banal.

Nor would it be worth this preface if it had not already become such a vogue-film, treated as somehow 'central' to our time: 'The im- measurable proportions of this horror, the terri- fying irony of unknown dimensions. 57 mega- tons packed into a single warhead. has never been put on to film in quite this way,' Sight and Sound says of it. 'Paris Nous A ppartient is a story rooted in the despair of its own time, in which the music of the Apocalypse comes from a tape-recorder and the Dark Powers de- scend into Hades in the latest Thunderbolt. . . . Undeniably a rare film, one can still describe it perhaps in that less rare term of a revelation.. . He [Rivettej has captured some part of the essence of our times, almost like a last message in a bottle floating in the sea.' But everyday objects or the artefacts of modern life can be used for fantasy or symbolism without making the results relevant to everyday modern life, after all; and Rivette's fantasy has the elusive- ness, almost the whimsy, of Cocteau rather than the harsh exactness of Kafka. Then fantasy involving solid people must be brief and com- pressed enough to stop us asking questions about the relative solidity of action and actors; and Paris Belongs to Us is spun out to two hours and twenty minutes. and has some pretty yawn- provoking detail, as well as its basic, though not necessarily insurmountable, disadvantages of

Of course I realise that the film is trying to talk at several levels at once and to get under our rational responses by images of fear, urgency, mystery, panic, etc.; and the story is only skeletal, a frame for something much more im- portant and alive. But the trouble is that, for all its portentous manner and the layer upon layer of mystification, nothing very important or very much alive seems there at all. Again, once again (as I sighed last week), we are in the dog-eared world of the new wave, the Paris of students, artists, cafés and hotel bedrooms. Everyone is modishly glum, of course, and with reason this time, since something is up; but as we never learn what, it's hard to comment on anything except the manner of its upness, which is abrupt, elliptical, paranoic. Someone has killed him- self or been killed; he was hounded to death, or maybe not: the same thing is happening to someone else, who finally does kill himself or get himself killed. whereupon a few (very approximate) scores are settled (or not), and some swans fly across the lake, 'a symbol of calm, sober beauty or of continuing menace,' as Sight and Sound puts it—take your choice.

Taking your choice is a full-time job in fact, throughout the film, which suppose is attempt- ing the kind of thing Calig,,ri managed, a vision full of meaning through the ravings of a mad- man (only this time they're not so much mad as childishly obsessed). The film is a hodgepodge of influences, fashions, trends, echoes and whatnots; both times I saw it it produced flattering little gasps and squeals of recognition at esoteric jokes, nudges and references. What it seems to me to lack is anything at all for the non-Parisian rest of the world. Far from being a film of universal significance, a mirror of the times, and so on, it is a self-absorbed study of the neuroses of a tiny corner of society which, because a few film-makers happen to belong to it, has come, cinematically speaking, to symbolise mankind.

Two new films about priests are neatly contrasted, one technically inept but with religious and psychological meaning, the other technically accomplished but (to me, anyway) religiously empty and psychologically interesting only at one remove, in a way the director can hardly, I think, have in- tended. The Power and the Glory (director: Marc Daniels; 'A' certificate) is a television film that sticks very closely to Greene's novel, blown up (sometimes ludicrously) for the cinema to show the plastery landscapes of a school play, and all sorts of crudities of make-up and acting style. Still it persuades, it lives and it makes its religious points; and the acting (Olivier as the whisky priest, George C. Scott as the police chief, Cyril Cusack as Tench, the dentist, Julie Harris as the priest's child's mother) is superb. Jean-Pierre Melville's Leon Morin, Priest ('X' certificate), on the other hand, with a bare, tense, fascinating style, has little religious point and feeling (though plenty of up-to-date religious mannerisms), and its psychological interest lies in the way its priest (Jean Paul Belmondo), in spite of the cassock a perfectly banal jeune premier, is seen through the eyes of an infatu- ated woman (Emmanuele Riva) in a spiritual glow: without anyone, apparently, noticing where the glow comes from.